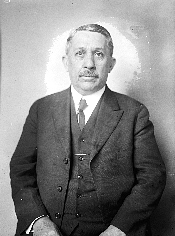 Edward Berton Almon was a lawyer, circuit judge and representative in Congress. He was born April 18, 1860, at Moulton, Lawrence County, the son of George Worsham and Nancy Berton (Eubank) Almon, the former brought by his parents from Pulaski, Tennessee, to Lawrence County, in 1822.

He was the grandson of Nathaniel and Elizabeth (Coleman) Almon, natives of Haywood County, N. C, who emigrated first to Pulaski, Tennessee., and thence to Lawrence County, the former a soldier in the War of 1812, and of Thomas and Mary (Gibson) Eubank, of Bedford County, Virginia.; and great-grandson of an Almon immigrant who fought in the Revolutionary War, was captured and carried back to England, and after peace returned to America and settled in North Carolina.

Representative Almon was educated in the common schools of Moulton; the Florence normal school, graduating in 1881; and the law department of the University of Alabama, 1883. He began the practice at Bel Green, in 1884; in 1885 located at Tuscumbia, where in 1886 he formed a partnership with James T. Kirk, which lasted until Mr. Almon was elected judge of the eleventh judicial circuit; was State senator, 1892 to 1894; elected judge of the eleventh judicial circuit in 1898; re-elected without opposition in 1904; was presidential elector from Alabama in 1896; for many years chairman of Democratic committee of Colbert County, and was also chairman of a committee of the good roads association.

In 1911 he represented Colbert County in the legislature and was chosen speaker of the house of representatives. On November 3, 1914, he was elected to the 64th congress from the eighth district, as a Democrat, in opposition to W. E. Hotchkiss, Progressive, and Emil Boeglin, Socialist; re-elected successively to the 65th and 66th congresses.

On Apr 5, 1917, Almon was one of the 50 representatives who voted against declaring war on Germany. During the 65th Congress, both bodies passed the Sedition Act which criminalized certain kinds of political dissent in the United States. The 67th Congress repealed the act. Almon died while in office, June 22, 1933, in Washington, D. C. He was succeeded by Archibald Hill Carmichael.

Representative Almon and his wife’s home “on 201 Almon Ave.(across the Commons) was a gabled Victorian house features with stained glass windows, service stairs as well as a front staircase, and a system of bells to call servants from the various rooms of the home.

It was built in 1888 by Edward B. Almon who served in the U. S. House of Representatives (1915- 1933). He was partly instrumental in the creation of the Tennessee Valley Authority.”

Mr. Almon was a Methodist; a Mason, a Knight of Pythias, a Knight of Honor, a Woodman of the World and an Elk.

He married on December 13, 1887, in Tuscumbia, to Luie Clooper, daughter of George K. and Charlotte T. (Beeny) Clooper, of Courtland, but formerly of Philadelphia, Pa.

They had the following known children:

They resided in Tuscumbia, Alabama. Edward B. Almon is buried at Oakwood Cemetery, in Tuscumbia, Colbert County, Alabama with his wife.