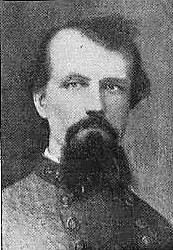 Gen. Bedford Forrest was involved with the railroad in Greensboro, Alabama after the Civil War

There has been but one railroad in Greensboro —known at present as the Akron branch of the Southern Railway. It was projected by the late General N. B. Forrest, the famous Confederate cavalry leader, who was quite a familiar figure on the streets of Greensboro during the latter part of the sixties and the early seventies. The road was formerly known as the Selma, Marion & Memphis Railroad, and also as the Selma & Mobile Railroad.

In 1869, the town of Greensboro issued $15,000 worth of bonds to aid in the construction of the road to this place. A direct tax was put on the citizens to pay interest on the bonds and to provide a sinking fund to pay off the indebtedness. The obligation has been met. There are at present only a few thousand dollars worth of the old bonds outstanding against the town.

In this connection, it will be of interest to note that the County of Hale also voted a bond issue of $60,000 in 1869 to aid in the building of the road. All of said bonds —principal and interest—have been paid in full by the citizens of Hale—who were taxed directly for the purpose for about thirty-five years.

The railroad was completed to Greensboro on November 4th, 1870—work having been suspended on it for some months when it reached Newbern, nine miles below Greensboro, to which place the citizens went by hack to catch the train going to Selma, until the trains begun to make the trip from this point—and the laying of the last rail was celebrated by a grand barbecue and public speaking by prominent Greensboro people. General Forrest, the President of the road, was present and was very highly commended for his indomitable energy in successfully completing the work under so many adverse circumstances.

It was hoped that the line would be at once extended to the then objective point, (Eutaw) but for twelve years Greensboro was practically the terminus of the road. It was not until 1882 that the road was completed to Akron and the first train was run to that point. There it connects with the Alabama Great Southern Railroad, and at Selma, it connects with the Southern Railway to Rome, Ga., and Meridian, Miss.

GEN. NATHANIEL BEDFORD FORREST. From a portrait in possession of his descendants in Memphis, Tenn., and regarded by them as the only good likeness in existence. HISTORY OF GREENSBORO, ALABAMA From Its Earliest Settlement by William Edward Wadsworth Yerby, Montgomery, Alabama

As stated above, General Forrest was quite a familiar figure on the streets of Greensboro during the construction of the railroad. He was a man who carried with him into his business life all those extraordinary physical, moral and intellectual qualities that distinguished him as a soldier. He was of commanding presence—being about six feet, two inches in height, and before his health was impaired by wounds received on the battlefields and by hard marches, his weight was one hundred and eighty to ninety pounds. In physical strength, he was a match for a prize ring champion. His hair was jet black, his skin dark, eyes blue and mild enough till the devil within was aroused, and then they flashed green. He was the idol of the soldiers during the war, but as a business man, he made many enemies by his overbearing and dictatorial manner. Some eminent men have adjudged that Forrest was really the greatest genius developed by the war between the States, so far as generalship was concerned. After completing his railroad work in this section, he moved to Memphis, Tenn., where he died some years ago.

The following incident in reference to the signing of the bonds issued by Hale County to aid in the construction of the railroad by General Forrest, is worthy of note:

After the $60,000 worth of bonds were printed, the probate judge of the county refused to sign them as required by law. General Forrest employed an attorney and demanded to be heard in the probate court in regard to the matter. A session of the court was called, the probate judge took his seat on the bench, and the General’s lawyer arose and made a very learned and exhaustive argument on the subject of the judge’s duty to sign the bonds. In the course of the argument, the attorney used many high-sounding legal phrases—such as “nunc pro tunc,” “nolens volens,” “amicus curiae,” etc. The judge, who, by the way, was not a lawyer, seemed to get very angry as the lawyer indulged in these Latin phrases.

At the conclusion of the lengthy argument the judge said in a very determined manner, addressing the plaintiff’s attorney: “Sir, I don’t give a damn about your nunc pro tuncs, your nolens volenses or your amicus curis. I am not going to sign them bonds!”

The announcement aroused the anger of the lawyer, and he jumped up and started for the judge, who quickly reached under his desk and pulled a six shooter and held it on the astonished limb of the law.

As quick as a flash, Gen. Forrest, who was sitting near the judge, grabbed the pistol from his hand, caught him by the collar, dragged him from the bench and very quietly said:

“Wall, Jedge, I don’t care a damn whether you sign them bonds nunc pro tunc, nolens volens or amicus curi; you are going to sign ’em. Come along in here with me!” And the general led the judge into an ante-room, where they remained about half an hour.

When they came back into the court room the judge was smiling and at once signed the bonds.

What took place in the little private conference between Gen. Forrest and the judge will never be known. General Forrest was probably the most daring and successful cavalry leader on either side in the civil war. He had the confidence of his men in a large degree, and they willingly followed him in his desperate encounters with the Federals.

There were a number of cavalrymen from Greensboro and Hale county in his command—Dr. S. C. Carson, Dr. L. D. Webb and Judge W. C. Christian of the number.

Dr. Carson relates that while Forrest’s cavalry was in camp at Ebenezer church, near Plantersville, Alabama, seventeen Federal Soldiers made a sudden charge upon the Confederate lines, taking them wholly by surprise. The Doctor says he saw General Forrest rush forward to the encounter with a pistol in each hand and shoot down three of the enemy. The seventeen Federals, the Doctor says, were as brave men as ever went upon a battlefield. They asked no quarter and gave none. It was a foolhardy undertaking and everyone of them paid the penalty with his life.

Col. L. J. Lawson and J. D. Hamilton enlisted in 1863 as members of Company B, 7th Alabama, Forrest’s Cavalry, and were with the company until the end of the War in 1865.

It is the consensus of opinion of the old soldiers of the Confederacy now residing in this section, that if it had not been for the aggressive and fearless manner in which Forrest and his cavalry kept the Federals at bay, that Greensboro, Marion, Eutaw and other towns In this part of Alabama would have been destroyed by the enemy. The Federals did not get to Greensboro during the four years of the war.