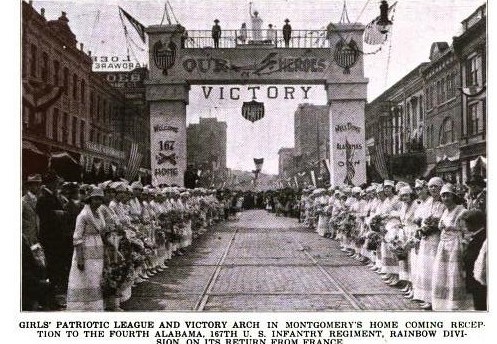 The Junior branch of the National League for Woman’s Service, Montgomery, the Girls’ Patriotic League, was active during 1917-19, organized under a call from Mrs. William J. Hannah, County chairman of the parent league.

Miss Eugenia Byars was elected president and from a small group of patriotic young ladies the organization grew to two-hundred members.

Among the activities of the Girls Patriotic League were the following: making comfort kits for soldiers and sailors; collecting donations for hospitals and libraries; raising funds for patriotic purposes by tag-days, dances, vaudevilles, etc.; collecting and distributing knitting materials; entertaining convalescents at the camp hospitals; promoted a “melting-pot,” through public donation of old silver, by which several hundred dollars was raised; aided the Red Cross in a garden party; sent gifts and comforts to maimed Alabama soldiers in French hospitals; assisted the Humane Society in raising funds for the “Red Star” fund for the relief of animals injured in the war zones in France and elsewhere; conducted a benefit tea room; participated in the parade escorting drafted men to the depot; raised funds for the “Remembrance Fund” for gifts, especially cigarettes, for Alabama boys in France; gave farewell dance for the Alabama troops on their removal to Camp Wheeler, Macon, Ga., and dance to welcome the Ohio Division on its arrival in Montgomery to go into camp at “Camp Sheridan.” 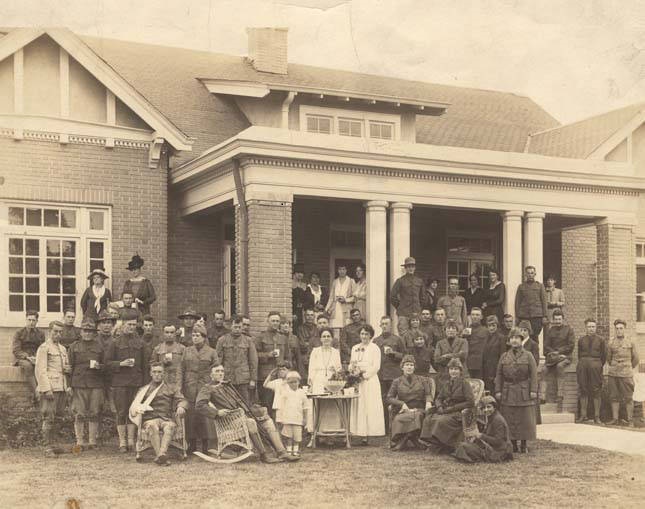 The G. P. L. assisted the U. S. Public Health Service in a campaign against typhoid fever by keeping records of inoculation and distributing literature; sold War Savings Stamps; furnished a room at the children’s receiving home; secured donations for Shelter Home for delinquent girls; assisted the Y. W. C. A. in a membership drive; marched in Registration Day parade; provided for the support of a soldier for a year at the Antituberculosis camp; spoke as “Four Minute Men” in the various bond and thrift drives and campaigns; taught in the school for illiterate soldiers at Camp Sheridan; acted as hostesses at the soldier’s club, Y. M. C. A. on Sunday afternoons; participated in the reception to the 167th Regiment (Fourth Alabama), May 13, 1919. In addition to the foregoing the league rendered services on numerous occasions of a minor character, but all-important.

ALABAMA DEATHS FROM WW I -Essential book for research in Alabama around the turn of the century. This book includes all the deaths from World War I, listed by the county where they last resided, with over 60 pages of names.