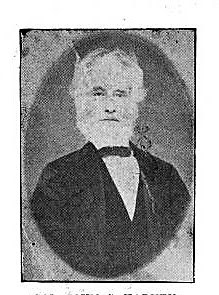 As early as 1824, and presumably earlier, there was a newspaper published in Greensboro called “The Halcyon,” and so far as the record goes, it was the first publication ever issued in the town. It was edited by Thomas Eastin. It was a four column sheet,—dimensions 22 1-2 by 17 1-2 inches.

In 1825, Mr Eastin, merged “The Halcyon” into the “Greene County Patriot,” which was also a small four-page paper, and printed it continuously for several years.

From an issue of “The Halcyon” dated April 24th, 1824, is to be noted an act of Congress for the “better organization of the District Court of the United States for the District of Alabama, approved March 8, 1824, by James Monroe. It also contains an act of the Legislature of Alabama authorizing the Governor and five Commissioners to effect a State loan of $100,000, by the issuance and sale of State bonds. The proceeds to be used as capital in the State Bank then about to be established. Israel Pickens was then Governor, and Jas. J. Pleasants Secretary of State.

Among the advertisements in this paper, are the following:

No personal mention of ladies in first papers.

“The Halcyon” and “The Patriot” were the first papers ever printed in the town, and their weekly advent was looked forward to with great interest by subscribers, and others.

In those days, and even down to a much later date, there was no personal mention of goings and comings of the citizens, nor any reports of dances, card parties, meetings of Women’s Clubs, etc. Indeed, it was the rule with the editors of the olden time to strenuously avoid the mention of the name of a lady in their publications.

One of the editors belonging to the old regime— Col. John G. Harvey—told the writer that he thought no lady’s name should ever appear in the public print except on two occasions, to-wit: When she married and when she died. And that was the idea entertained on the subject by nearly all the editors of fifty or more years ago. Could they come forth from their graves and take only a hasty glance at the average publication of today, they would be shocked beyond measure, and possibly think that we had fallen upon degenerate times.

In July 1833, The Greene County Sentinel was established in Greensboro by Daniel F. Brown. It was a five column, four-page paper, and was well patronized by the citizens of Greene county and of Mobile in the way of advertising. The subscription was three dollars per year, or four dollars if the subscriber waited until the end of the year to pay the bill.

We have before us a copy of the Sentinel of December 26, 1835. It contains such names of former residents of the town as Young Bohannan, who offers “A Reward of $5.00 for the return of a Hound Dog with the end of his tail cut off;” Doctors McCann & Thompson who offer their professional services to the people; William W. Jackson, notifies all persons not to purchase a certain note of hand which he had given B. H. Covington; Dr. Wm. P. Murphy tenders his services to the people of Greensboro and vicinity, and advertises his office “at the residence of Mr. John G. Harvey opposite Mr. Gayle’s store;” Webb & Dugger advertise their mercantile business, as do also J. & G. Noble; Wm. Myatt, Secretary of Lafayette Masonic Lodge, gives notice that there will be a Masonic and citizen’s ball given at the Warrior House in Greensboro on the night of December 28th, 1835; Chas. Whelan advertises new and fashionable clothing, and Locke & Lowry, were merchant tailors in Greensboro seventy odd years ago; various tracts of land are offered for sale by John F. Sossaman, W. P. Brown, Wm. B. Lightfoot, George S. Dugger, John Carter, James S. Jones, Wm. F. Monett, James Yeates and others. The following advertisement from the Sentinel will prove to be something unusual to the reader of the present generation:

“Public Auction—Will be sold in the Town of Greensborough, on the 8th day of January 1836, to the highest bidder, 6 Likely Negroes, consisting of two Men, three Women and one Boy; all ofwhich are choice field hands. Terms made known on the day of sale. GULEELMUS WOOD.”

The Sentinel passed into the hands of Thomas DeWolf, who retained possession of it for a year or so, and then sold out to one McCormic, and he in turn sold the paper to John B. Rittenhouse. Rittenhouse tired of the newspaper business, and sold the plant to Charles Briggs, and in 1840 left Greensboro and became a Purser in the U. S. Navy. He died in Philadelphia, June 22, 1874, aged 62 years. He was on the retired list of the Navy at the time of his death.

During The Sentinel’s varied career its name was changed by some one of its owners to The Alabama Beacon —subscription $5.00 per year in advance —under which title Col. John G. Harvey purchased it in 1843 and continued its publication until his death, July 3, 1890, when the paper passed into the hands of Jas. W. Bondurant, who in a year or two sold it to H. G. Benners and Edwin S. Jack. Mr. Benners soon purchased Mr. Jack’s interest, and was from 1893 to 1908 the editor and publisher, but in the latter year he leased it to Geo. K. Keady, and returned to the practice of the Law.

The career of The Beacon has been a long and honorable one, and is linked with the history of the town for nearly three-quarters of a century.

The Alabama Republican was the name of a paper that was published in Greensboro by Thomas DeWolf in 1839. How long it survived, we do not know, and of its history, we could learn nothing.

In the year 1835 there was published in Greensboro a paper called the Beacon Light of Liberty, but as to its history we are in ignorance, nor could we ascertain any facts in regard to it. Back in those days the county officials were not required to keep bound file copies of all newspapers published in the county, as is now the case, and it is a very great pity that such a law was not in force at that time, for the history of the progress or retrogression of any town or city in Alabama might be accurately written by a study of these old papers—for the papers then, as now, largely reflected the life of the communities in which they were published. In reference to the Beacon Light of Liberty, one might naturally suppose that the Alabama Beacon was the outgrowth of this publication, but the facts related above in regard to The Beacon were obtained from Col. John G. Harvey, who owned and edited it so long, and a more accurate and painstaking man in his statement of matters of fact could not be found. In May 1830, Jacob I. Cribbs conducted the Greene County Gazette at Erie. If the old saying to the effect that “the good die young” is applicable to newspapers, The Gazette must have been a very proper and well-behaved periodical, for its existence extended over a period of only three years.

In November 1876, W. C. Garrett established The Southern Watchman in Greensboro, which he conducted for several years, and then sold the plant to Alex H. Williams, who owned and edited it until his death in November 1885. The paper was then purchased by Wm. E. W. Yerby, the present editor and proprietor of The Greensboro Watchman—Mr. Yerby changing the name from The Southern Watchman to The Greensboro Watchman—thus giving the paper the distinction and honor of being the first publication ever named for the town of Greensboro. In 1902, The Greensboro Record Company established the Greensboro Record—Geo. K. Keady and Lee M. Otts editors and publishers.

Mr. Keady severed his connection with the Record in the course of a couple of years, and Mr. Otts has continued its publication to the present time.

It will be seen from the foregoing that Greensboro has not at any time been without a newspaper during the past eighty-five years. To recapitulate: The list is as follows: The Halcyon, The Greene County Patriot, The Beacon Light of Liberty, The Greene County Sentinel, The Alabama Republican, The Alabama Beacon, The Greensboro Watchman, The Greensboro Record—a total of eight. The editors of the papers mentioned above have been, during the eighty-five years, as follows: Thomas Eastin, Daniel F. Brown, Thomas DeWolf, Mr. McCormic, John B. Rittenhouse, Charles Briggs, John G. Harvey, W. C. Garrett, Alex H. Williams, Wm. E. W. Yerby, Jas. W. Bondurant, H. G. Benners, Edwin S. Jack, George K. Keady, Lee M. Otts—a total of fifteen.