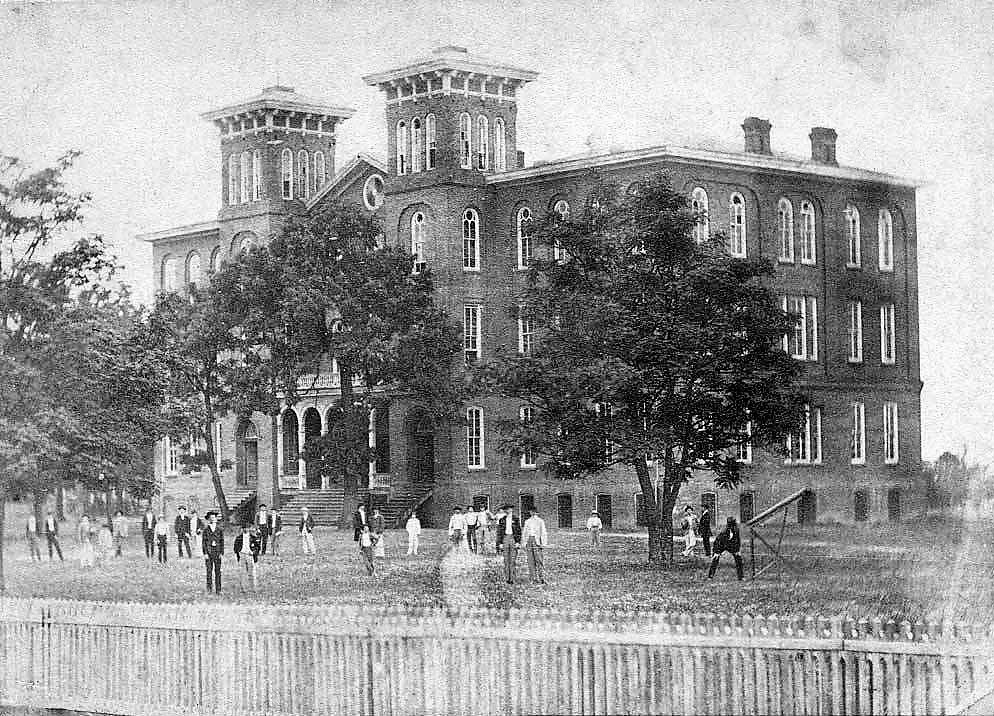 Mr. Sayre: No doubt both your readers and yourself would be glad to peruse some account of the great gala day, that came off here last Wednesday, on the occasion of laying the Corner Stone of the “East Alabama Male College.” Should you not fortunately secure a better pen than mine, I trust the following brief notes may reach you in time for publication this week. (Continued below)

Talked about for more than three years

Your readers know that this Institution has been talked of for more than three years past. They are aware, also, of the difficulties under which the enterprise has labored from its first inception. Now, however, it has risen from the region of uncertainty into the position of an ascertained popular fact. The interest evinced in the ceremonies of last Wednesday; the immense concourse of citizens and visitors from all quarters; the enthusiasm of the masses; the hearty co-operation of men of wealth and influence; and the sympathetic appreciation of high functionaries in the Church and State, all demonstrate the deep hold which the movement has upon the popular heart. The people will assuredly sustain the institution.

Photograph of “Old Main”, the first building on Auburn’s campus was taken in 1883. This is the building where this cornerstone was laid.  It was destroyed by fire in 1887 – It was located on South College Street, where the present day Samford Hall stands and was the original building of the East Alabama Male College (now Auburn University). It was originally used for classrooms and the library and served as a Confederate Hospital from 1864-1866 during the Civil War. The building burned in 1887 and was replaced by the current Samford Hall (Auburn University Digital Library)

The festivities took place on a fair day

Wednesday was a fair day, after weeks of rain. At an early hour, crowds of persons from the adjacent country poured into the town. The arrivals of the cars brought accessions to the multitude. At eleven o’clock an immense procession moved to the College grounds headed by about five hundred Masons and Odd Fellows. The notes of music; the chiming of bells; the roll of carriages and vehicles of all descriptions; the array of female beauty and loveliness; the measured tread of the long procession; the gay dresses of the various orders, all presented an inspiring scene.

Upon reaching the College grounds the ceremony of laying the Corner Stone was performed with Masonic formalities. A great variety of articles were deposited therein, including the Bible, Hymn Book and discipline of the Methodist Episcopal Church, South; leading church and some secular papers, coins, regalia, and so forth.

About one o’clock Bishop Pierce addressed the vast audience, in that fascinating style of popular oratory of which he is the fortunate possessor. His speech was one of marked ability, abounding in just, striking and patriotic sentiments. He was followed by Dr. Summers. Those alone, who haye heard this prince of platform speakers can form any adequate conception of the vastness of the learning, and the depth and extent of the condition, which he composed into one short address, and that vivified by such an outbreaking mirthfulness as to enchain a miscellaneous audience, under circumstances peculiarly disadvantageous.

After the speeches, dinner was announced. It was a grand affair. Twelve hundred feet of tables, I was told, were spread with all that the palate could desire. The profusion of eatables, I never saw equalled. About four or five thousand persons were fed and filled, and the fragments and reserves of food would have fed half as many more. The citizens of Auburn and the surrounding country certainly deserve extraordinary praise for the profuse abundance, the excellent quality, and the nice preparation of this great public dinner.

I may mention that Mr. Billiard delivered a fine address, at night, in the College Chapel, followed by a begging speech from Dr. Summers which realized several thousand dollars.

The faculty was elected

The Trustees of the new College elected the following faculty:

Dr. Smith is the distinguished advocate of slavery, a man of quaint intellect, a powerful thinker, an impressive writer, an orator of unsurpassed force and power. His reputation is coextensive with the Union. His acceptance of the Presidency would insure the success of the enterprise.

Of the other members of the Faculty it is sufficient to observe, that they are widely and favorably known in the sections in which they have lived and labored. They are all believed to be men of the first order of talent in their several fields of research and instruction.

The following plan presents the grand outlines of the system of instruction, adopted by the Trustees. You will see that it is elevated, comprehensive and liberal. There shall be four grand divisions of study, viz:

With such a plan, with so able a Faculty, and with such a fine building as is in process of erection; I can but believe that the “East Alabama Male College” will have great success.

Additional notes about the ceremony

At the Annual Session of the Alabama Conference held at Eufaula, Alabama, November 30 to December 8. 1859 the decision was made whereby the school came under the care of the Methodist Church-West (1893) History of Methodism in Alabama, pp 738-739.)

1William Jeremiah Sassnett was b. in Hancock County, Georgia, April 29, 1820. He was president of La Grange Female College, Georgia, when elected to the Presidency of East Alabama Male College. He continued as such until suspension of operation on account of the War Between the States. He died November 3, 1865.-West. History of Methodism in Alabama, pp 738-739. Also, minutes of Annual Conference of the Methodist Episcopal Church South, 1855-1866, p. 574, on file in Department of Archives and History. William Jeremiah Sasnett, a member of the first graduating class of Oglethorpe University in 1839, and a founder of Thalia (Literary Society of that University) was the first of many Oglethorpe alumni who published a book-Progress (Nashville, 1855,) Before going to La Grange College, he was a Professor at’ Emory College. Oglethorpe University conferred an honorary degree of Master of Arts upon William J. Sasnett in 1841,-Tankersley. College Life at Old Oglethorpe, University of Georgia Press, Athens (1951) & Reverand Sassnett was a son-in-law of Boiling Hall, Senior.

3William P. Harrison-a Methodist Preacher of the Alabama Conference, of whom West says: “He was one of three noted controversialists of the Methodist Church, who during animal conference session of December 12-21, 1860, attended political meeting and delivered speeches favoring Secession.” “In 1858, he published Theophilus Walton, a reply Theodosia Earnest’. This was a work of some merit and the cause of Methodism in Alabama, as well as in other places, was strengthened by it.”-West, (1893,) -History of Methodism in Alabama, pp 707 and 717.

4John W. Glenn, no doubt a member of the well known Glenn family so closely connected with the history of Auburn. Reverand John Bowles Glenn was at one time President of the Board of Trustees, but there is no record of him as a teacher.

5William F. Slaton. “In the fifties the present post office corner with the site of Professor William F. Slaton’s academy which served as a preparatory school for the Alabama Conference Male College. Colonel Slaton was later superintendent of Atlanta Schools for twenty-five years. Auburn, Loveliest Village of the Plains, p. 73, by Hollifield. William F. Slaton was Major in 37th. Alabama Infantry Regiment, Confederate States Army, having enlisted at Auburn, May 13, 1862—Military Records, Department of Archives and History.

6John Darby. Not only was John M. Darby one of the first chosen by the Board of Trustees but he had the added distinction of being at the same time a lecturer in Natural Science at the Auburn Female College—Through the ‘Years by Peter A. Brannon, published in Montgomery Advertiser—August 6, 1944. He was born September 27, 1804, in North Adams, Massachusetts. Left fatherless at ten years of age, he was apprenticed to a fuller. He had few opportunities for schooling, but worked at his books while at his machine at the mill. He entered Williams College when he was twenty-three years of age. Follow- .ing graduation in 1831, he taught at Williamstown Academy, next at Barhamville Seminary, Columbia, South Carolina, in 1842, he was made Professor of Natural Sciences at Wesleyan College, Macon, Georgia. His health failing after several years of teaching here, he returned to Williamstown, where he was appointed professor of Mathematics in Williams College. After a year, however, the state of his health again compelled him to go to a warmer climate and for two years he taught again at Barhamville Seminary. Assuming then the direction of Sigourney Institute at Culloden, Georgia, he continued at that school for six years. In 1855, he accepted the headship of Auburn (Alabama) Masonic Female College. He died in New York City, September 1, 1877, (Dictionary of American Biography, Volume V, p. 72. )