This community had an open range. Everybody turning their cows mules and hogs out of the pastures. and pens to make their own living through the winter months. However. we would always have to round-up the milk cow in case she didn’t come home. Most of the time she did by keeping the calf penned up and a few loud calls. We named all of our cows and most of the time. they would respond to name calling. Some of the best were Silky. Nettie. Dolly and Catherine.

A man named Mr. T. A. Steed operated a milking barn. He owned lots of jersey cows. But lost lots of them in the winter. especially calves. He used the milk can method; by that I mean he would ship his milk by train every day to Mobile or Selma.  I have  seen lots of his yearling dead and dying from starvation. He gave me a Jersey Belle one time that was down not very far from home. I managed to pull him through the winter by feeding corn shucks and corn a little at a time. I named him poor boy. In the early spring when weeds and grass began to come up. we had a pretty big frost one night. so I let him out as usual to graze so the next morning we had to drag him off. It was a long time before I ever owned another calf. I guess the frostbitten grass fermented in his stomach; anyway. it’s like I heard. an old negro man say that let his old horse starve to death…dem’s got gotta Lo~er.

The winter months were always the worst time of the year for us. Really not enough of anything to make life comfortable. I remember one thing along the food line that we did was making collard kraut. All the neighborhood families had their garden patch wired in and they would set up kraut making in the middle of the patch.

Mama owned a wooden barrel that would hold about 20 gallons. so they would chop the collards into this barrel. adding salt packing as the process went until it. Was full. then placing a weight on top to hold them down in the barrel. Somehow this briny water would preserve them after sitting several days. They would tie a cloth over the top and weight down a piece of tin to keep out the rain and insects.

We also used the garden patch to bank sweet potatoes. Actually. the fence around the garden was not wire as I mentioned before. but it was made from rough boards or slats about 6′ long and about 4″ wide. The reason for the fence. we had what we called free range; everybody turned the cattle and hogs out of the pens and pasture after gathering time. We piled the potatoes up in a cone fashion shape. covered them with pine straw. first and then dirt. Then we would dig a hole into the bank of potatoes on the south side of the bank so some air could penetrate. This was done to try to keep them from rotting. 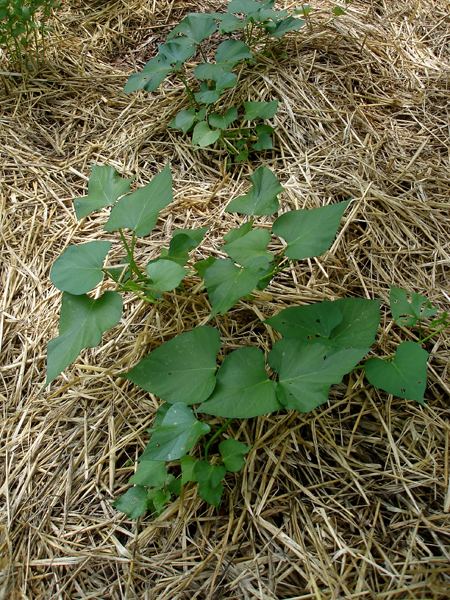 Nature was the only kind of refrigeration or curing device we had. So we used methods  to try and preserve food. Many things  were prepared on a day to day basis. During summertime, food left over would sour.

Previous to this statement. we attended school in a church building with a cemetery located nearby. I don’t know how long this custom has been in effect, but to my first remembrance, they were having what is called Decoration Day. On every 2nd Sunday in May. people from all the area and some that bad moved away returned to this place on every date, bringing baskets of food and spending the day in fellowship and worship service.

Before lunch, flowers were placed on every grave in the cemetery. Children enjoyed the day more than adults because of playing together and probably learning new games to play. Some of the game! were hopscotch and jumping spots.

This community~Independent. was located in the South eastern part of Wilcox county, about 8 miles from the Alabama River and about 3 miles from the Southern Railroad. This was a dense wooded area. However, there were many areas of opened land of which the community) farmed. Most of the time referred to as, “the hills” by the neighbors.