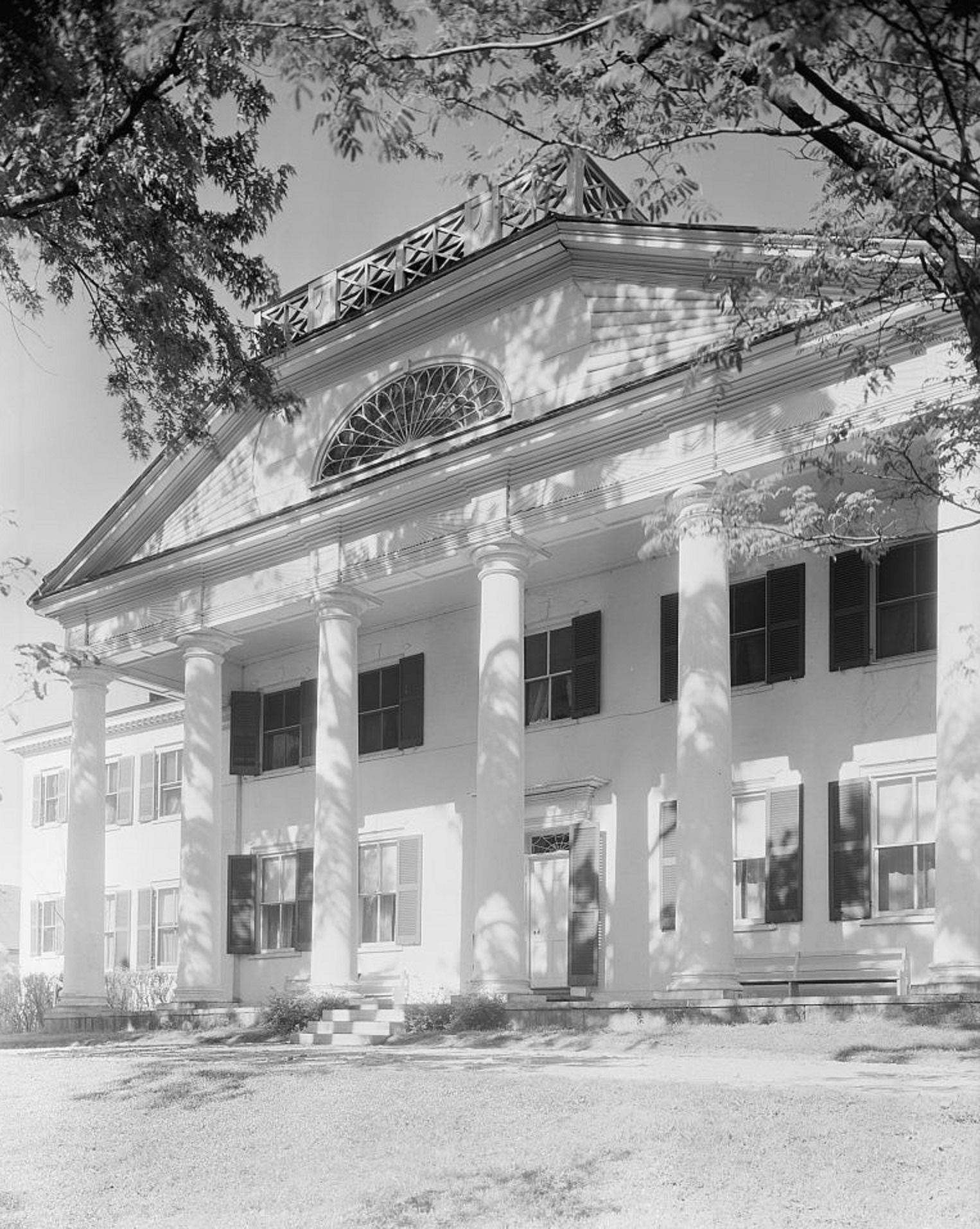 Much of the wealth and refinement of early days in Alabama could be found in Huntsville and Madison County. Few parts of the state equal Huntsville and its handsome homes from Alabama’s early days. The list of Madison County’s beautiful historic homes is both long and quite impressive and some of the most interesting were residents of colorful historical figures as follows: 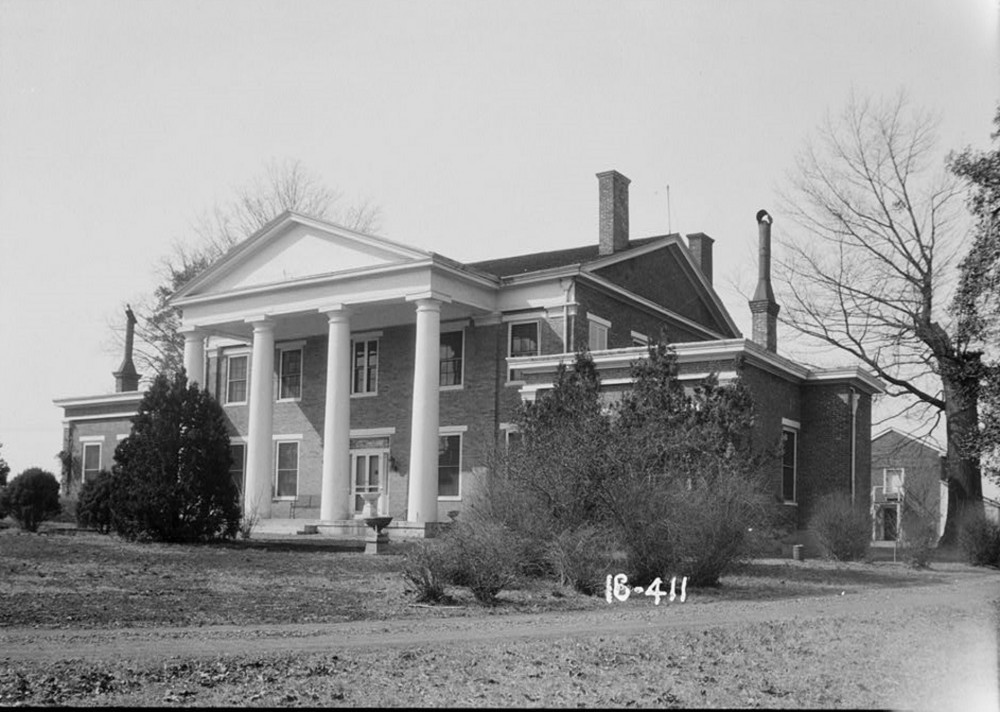 Oaklawn, John Robinson House and the Robinson–Dilworth House, is located on the west side of Meridian Pike. The home was built in 1844 and quartered many soldiers during the Spanish American War. It was also used as a hospital during the Civil War and is noted as one of the more beautiful colonial homes in America.

It was built in 1844 by John Robinson, a longtime revenue commissioner in Madison County who became one of the county’s largest landowners. During the Civil War, the house was used by the Union Army as an officers’ quarters. The family vacated the house in the late 19th century, and during the Spanish–American War, the grounds were used as an army camp and hospital. In 1919, the house was purchased by the Dilworth family and restored from its poor condition. The house was later owned by Max Luther, a prominent local merchant.

403 Echols Hill, Huntsville. Built in 1814, the home of Leroy Pope considered “The Father of Huntsville.” This home is the oldest documented mansion in the state of Alabama, this was built for Leroy Pope, known as the Father of Huntsville because of his active involvement in the early political, economic, and cultural development of the town. Pope chose his site on the highest hill overlooking the growing community. The materials for its construction were brought from Tennessee on flatboats to Ditto’s Landing and transported to the site by wagons. Here in May of 1814 Pope hosted a public dinner on the lawn for General Andrew Jackson and his company, who were passing through on their return from the Battle of Horseshoe Bend. Architect George Steele is credited with the crowning glory to the structure—the majestic portico. The mix of Federal ornament on the Classical Revival portico blends so well with the house that is has been acclaimed as one of the handsomest in the South. The house remains in the hands of the Patton descendants and is leased to the University of Alabama in Huntsville as the residence of its president. (A walking Tour of Huntsville, Alabama) 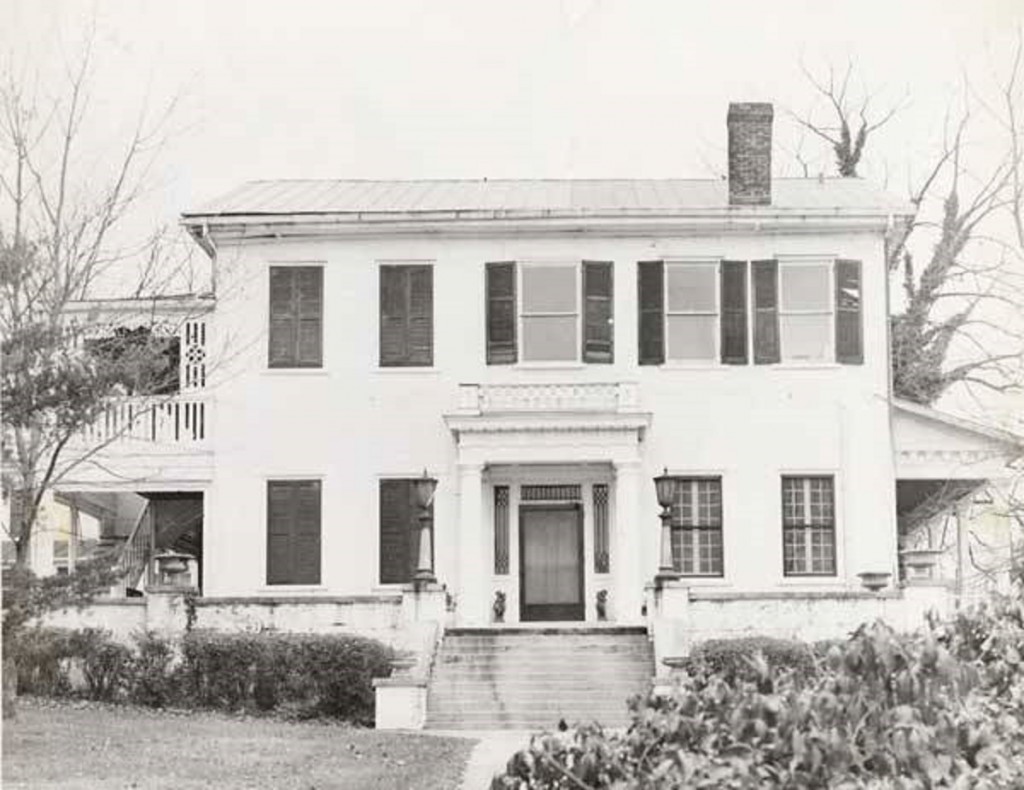 Walker Home: 413 McClung St., Huntsville. Home of Leroy Pope Walker built circa 1834. The Greek Revival home at the intersection of Echols Avenue and McClung Avenue was built in 1834, and was purchased in 1870 by General LeRoy Pope Walker, who lived there until his death in 1884.

The original part of this Greek Revival home consisted of the present reception hall with twin parlors beyond, an identical second floor, and a basement. The east wing, consisting of a dining room and east room, was added as one story in the 1850’s. There have been many additions and renovations to the house, but most of the original features have been preserved. The site of the old city reservoir can still be seen on the front lawn, now converted into a sunken garden. Perhaps the most noteworthy resident of the house was Leroy Pope Walker, who purchased the house in 1870. Walker was appointed the first secretary of war of the Confederacy by Jefferson Davis in February of 1861. It was Walker who issued the order to fire upon Fort Sumter. In 1875, he served as president of the Second Constitutional Convention, the same post that his father, John Williams Walker, had held in the First Constitutional Convention of 1818.(A walking Tour of Huntsville, Alabama) 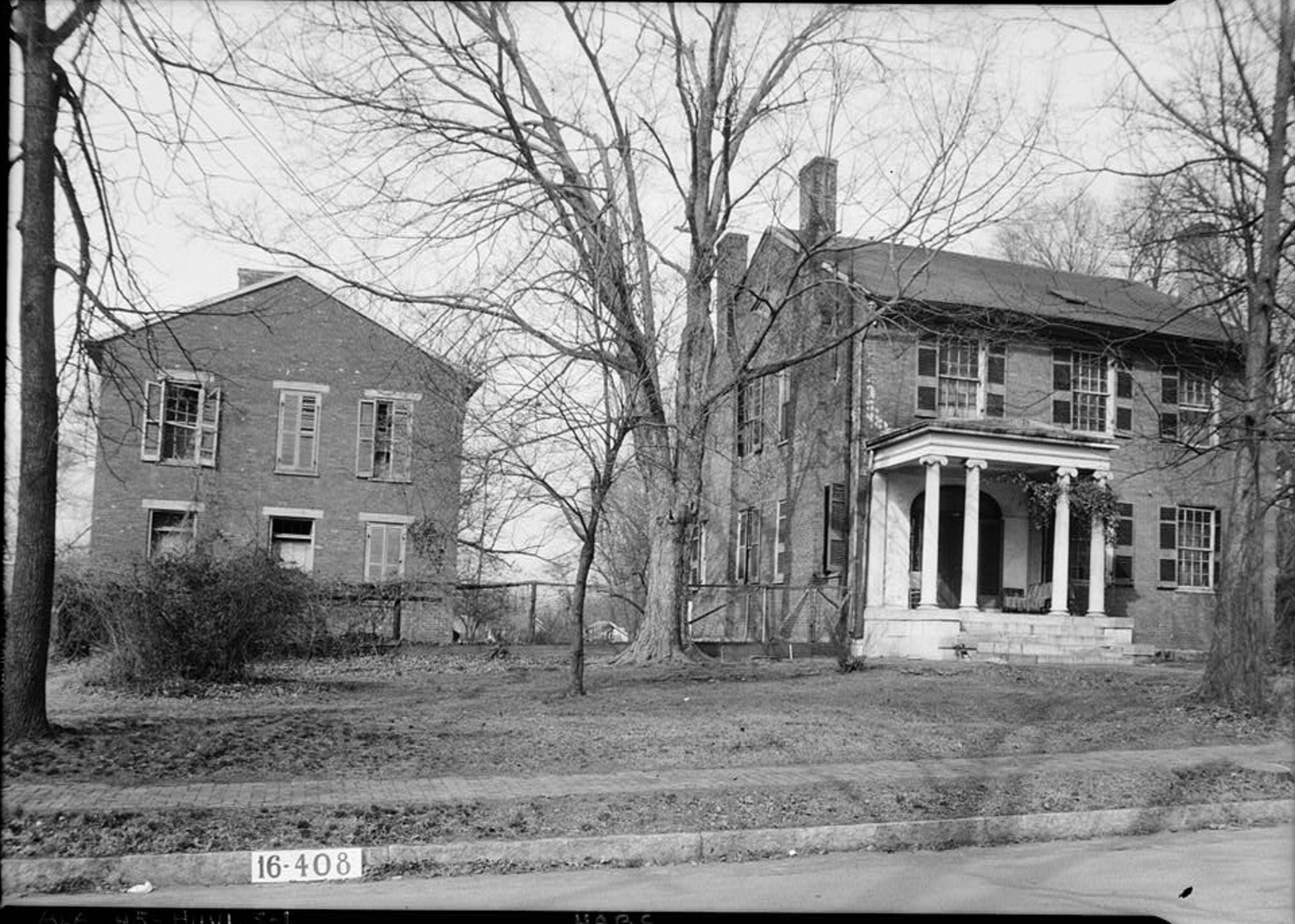 513 Eustis—1830 J. Withers Clay, editor of the Huntsville Democrat, was perhaps the most noteworthy resident of this two-story Federal home. During the Civil War, Clay made so many editorial comments against the Union that General O. M. Mitchel, commander of the occupying forces, had him arrested and banished from town.(A walking Tour of Huntsville, Alabama) 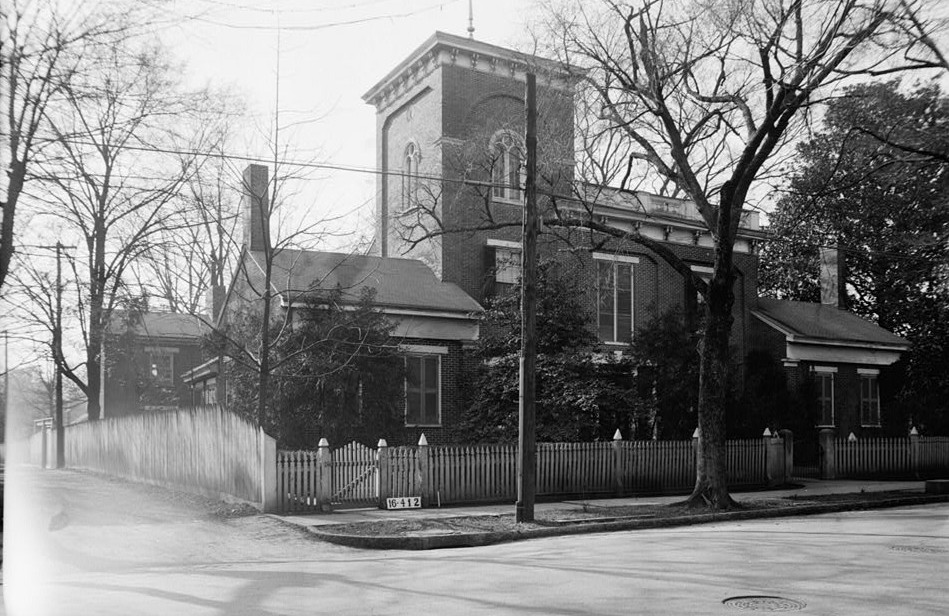 In 1857, an Italianate facade and tower were added to this 1825 Federal house. George Neal, son of Madison County’s first sheriff, Stephen Neal, purchased the house in 1850 and brought a landscape artist from England to plan the garden and the shrubbery. The home remained in the Neal family until 1949. The house still stands on Franklin Street in the Twickenham Historic District. (A walking Tour of Huntsville, Alabama) 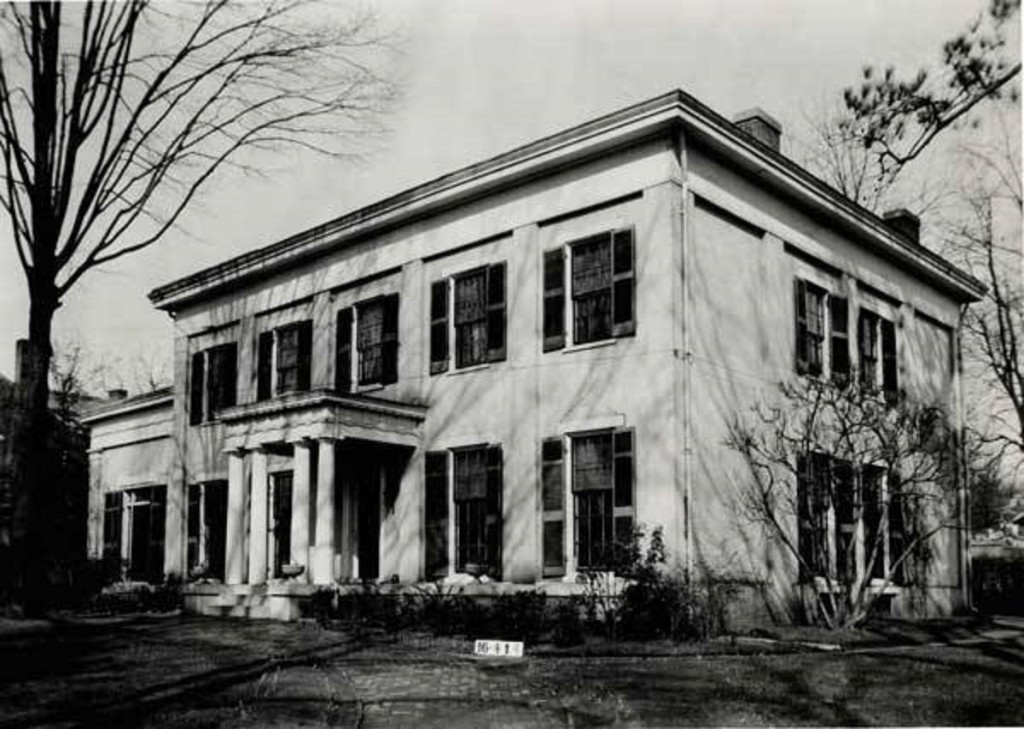 Fearn Home: 517 Franklin St., Huntsville. Built in 1822, this home was the residence of Dr. Thomas Fearn.

Dr Thomas Fearn was a native of Virginia who came to Huntsville in 1814 as a surgeon in charge of the military hospital by appointment of General Andrew Jackson. He was one of the most outstanding physicians in the South. He became one of the town’s leading and most influential citizens, involved in farming, politics, banking, and public works, and served as one of the first trustees of the University of Alabama when it was being developed in 1821. He is perhaps best known for developing quinine to detect the difference between malaria and typhoid fever and for developing, with his brother George, Huntsville’s first public water system.

Dr. Fearn wanted slavery abolished and was opposed to secession but agreed to represent Huntsville at the Confederate Congress. While Huntsville was occupied by Union troops, General O. M. Mitchel became angry about Confederate guerilla attacks on his supply and communication lines. He had Fearn and eleven other prominent citizens jailed in the courthouse and demanded that they sign a statement abhorring partisan warfare and accepting the responsibility for stopping it. All refused and were eventually released. Dr. Fearn caught a cold during his internment which developed into pneumonia and caused his death in January of 1863.

This house was built by Fearn in 1820 as a Federal half-house. In 1849, he contracted with architect George Steele to add the two southern bays, doubling the size of the house at a cost of $2,000. Steele adapted the Greek Revival styling in favor at that time, easily discerned in the porch, to the existing Federal residence. The brick walks, much of the landscaping, fireplaces, mantels, 15″ baseboards, floors, and sliding doors are original. The home remained in Dr. Fearn’s family until 1964. who discovered the nature of quinine, with the consequent cure of malaria. He was also a physician who served with General Andrew Jackson in the Creek War of 1813. (A Walking Tour of Huntsville, Alabama) 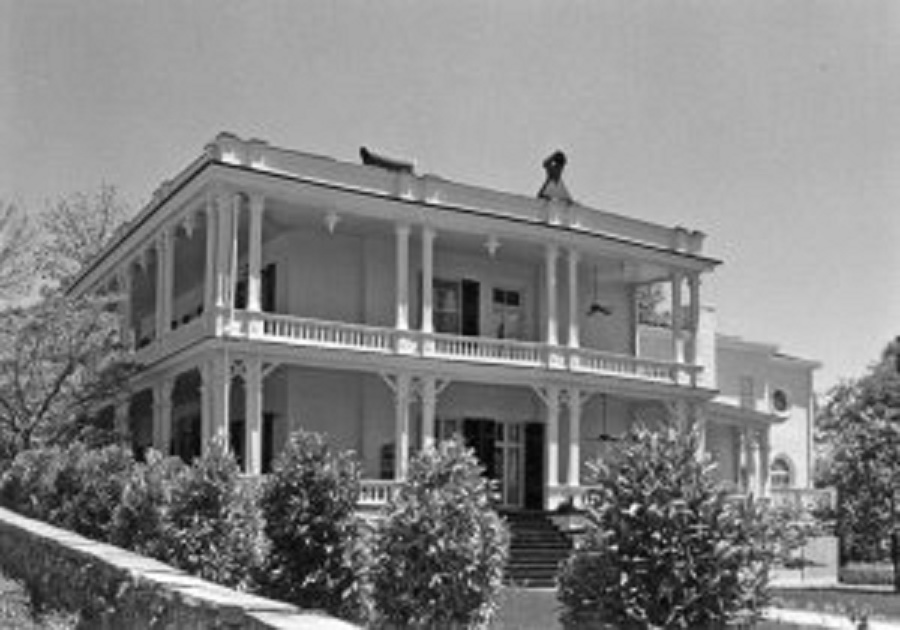 This beautiful home, with its galleries on the east and north sides, evokes the style of the Gulf Coast. The double doors are framed with glass sides and fan lights etched in the grape design. Frescoes in an oval pattern of leaves and fern around unusual bronze chandeliers in the living and dining rooms were done by a talented slave. Ornately carved Italian marbel mantels in three downstairs rooms are from the John Jacob Astor house. The grounds were terraced in three levels descending to Adams Street and featured statues of all the continents. Now only the statues of Europe and Asia remain. The house was built by the controversial Colonel James W. McClung, a legislator, speaker of the house, state senator, and one-time candidate for governor. McClung became involved in a controversy with Mr. Andrew Wills, editor of the Huntsville Democrat. McClung challenged Wills to a duel on the courthouse square. Wills was killed, but McClung was not indicted or convicted and cared for Wills’ family thereafter. (A Walking Tour of Huntsville, Alabama)

i  Harvie Jones was the primary Huntsville Architect who played a critical role in the preservation of historic homes and buildings in Huntsville. He served as the architect for the restoration of many historic buildings and was a key player in the creation of Constitution Village Park and the Twickenham Historic Preservation District. His papers are preserved in the Harvie Jones Architectural Collection at the University of Alabama Huntsville’s Salmon Library. The Huntsville History Collection highlights information from that collection, including photographs, architectural notes and historical maps.