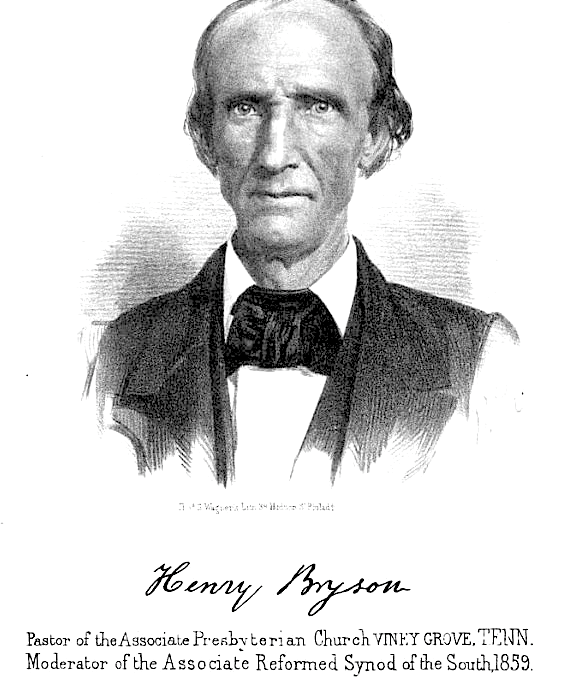 THE JOURNAL OF HENRY BRYSON

Here the diary lists travels in the state of Georgia and Florida, then returns to Alabama.

I started this morning for the people of Cov. Cou. Ala, But having gone only 15 miles I was hailed by one McDonol [Daniel McDonald] who lives on the road, and was allmost [sic] compelled to spend the day and preach for them in the evening. I consented and did so. And there was a considerable assembly collected. These people were all Methodists. The man that stopped me was himself a preacher among them and his son, and one of his Brothers, And the Circuit rider [sic] for preachers of them, and myself made the 8th. After sermon I went home with the same man again and stayed until morning.(Daniel McDonald was the preacher of the area’s Methodist circuit. Watson, Forgotton Trails, 165.)

This day I came on up to one Miller’s and stopped and got my horse fed, and paid 25 cents. And came on by henry court house,53 and on to the Block house on the Choctahatchey [sic] River, and stayed all night, and was charged nothing.

Th. I came on this morning into the settlement where I preached going down at Clay Bank River, and took breckfast, and had my horse fed and paid 50 cents. And then came on to the settlement of the coon’s on P. River [sic] there stayed all night, paid only for my horse feed 25 cents.

Fri. This day I came on to one Fag took breckfast and paid 50 cents, and then came on to Mr. Josiah Bradley’s, And I stayed in this settlement until next thursday [sic], and preached to them on the sabbath.

Th. This day I went over the sepulgas [Sepulga] R. to Mr. McFarlan’s and stayed all night.

Fri. I went on this day through the vilage [sic] of Sparta, and on to Mag. Bouie’s formerly of Abbeville, and stayed with them this night,

(Probably Abbeville, near the Ft. Gaines terminus of the 3-Notch Road Bryson mentions earlier. However, Old Richmond had been the county seat before Dale became a separate county and may have still been so called. Note that in the “Way Bill” Bryson refers to “Henry Old Court House1′

Sat. I went on to Ft. Claiborn [Claiborne] on the Alabama River where I spent the sabbath.

Sab. We had large assemblies on Saturday night, and on sabbath day and night too.

Mon. I came up to the Widow Bonner’s.

I went up into the Jones’ settlement and stayed here two sabbath days, until the 4 of June.

June Tu. 5. This day I left Sam Bonner’s, and came on to Col. Johnston’s [Johnson’s] on the west side of the Ala. River. Where I stayed until 12th of June. We had sermon at his house on Sat., and at liberty [sic] on Sab. A meeting house in this settlement.

12th. Tu. I came up to Mr. Chesnuts, and stayed with him this night.

W. I came over to the Widow Johnston’s, and stayed there until Sat. morning

to Mr. John Kinimy at Clay Bank Creek — 14 tollerable.(probably John Kimmey (“Kimmy” in the 1830 census), who lived on Clay Bank and who was the first sheriff of Dale County)

Cross Black Warrior River and then take the turn pike or Boilers [Byler] Road. (Byler Road 1819″ on the “Historic Roads and Trails” map.)

to Squire Hamiltons Member of the Apse. Reformed Church 9 Miles.

thence to Browns Ferry on Tennessee River 40 miles (Horse Boat) (The site of the Brown’s Ferry nuclear power plant. Tanner’s “Georgia and Alabama” map shows the road from Russellville to Athens crossing the river at Marathon. The ferry route can be determined by examining the “Brown’s Ferry Road” on the relevant U.S. Geological Survey Map (Hillsboro Quadrangle)

Keep the Fayetteville Road 30 Miles then Enquire for Squire Parkersons

thence to Centerville Hickman County 30 Miles on the Direction of the Western District to James Mcneelys 20 M. Good fare,

thence to Reynoldsbrg [Reynoldsburg] on Tennessee River (Once the county seat of Humphreys County, located on the east bank of the Tennessee twelve miles below the mouth of the Duck River. The town site is now “largely under the waters of Kentucky Lake.” Robert M. McBride and Owen Meredith, eds., Eastin Morns’ Tennessee Gazeteer, 1834 and Matthew Rhea’s of the State of Tennessee 1832 (Nashville, 1971), 242, 242n.)

thence to Mr. James Harpers — 14 Miles of the Apse. Refmd.