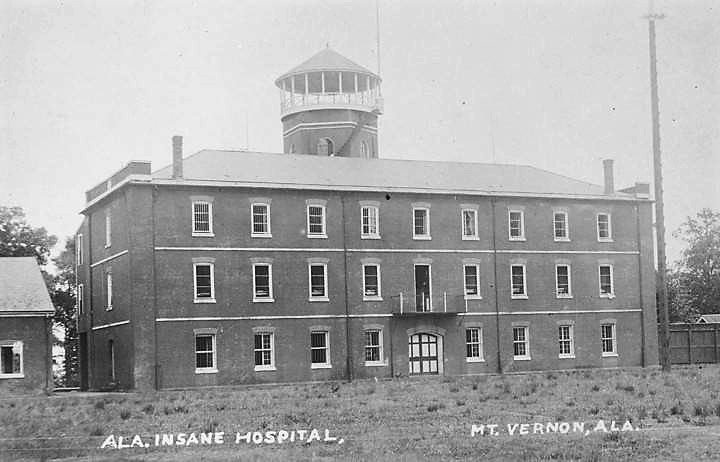 Recently, there has been talk of restoring and reopening Searcy Hospital in Mount Vernon, Alabama as a mental health facility in Mobile County. Searcy Hospital served as a mental health facility from 1900 to 2012, when it was abandoned, but the area has a longer history than that. More than 30 historic buildings in Mount Vernon played a significant role in the State of Alabama and are now being overtaken by kudzu, animals and nature. (continued below)

Mount Vernon Cantonment Arsenal and Barracks was an American Arsenal near the junction of the Alabama and Tombigbee Rivers, on the high ground 2 miles west of Fort Stoddert. It dates back to pioneer days in Alabama. Originally, Mount Vernon was a settlement that arose when Fort Stoddert was built to protect the nation’s southern border. Today, it is located in south-central Mobile County.

In 1807, vice-president Aaron Burr was held at Mt. Vernon Arsenal after he was captured in Alabama and arrested for treason.

In the latter part of 1810, a revolt was attempted by the “Bigbee” settlers against Spanish rule. A detachment of United States troops with Col. Thomas H. Cushing in command was stationed for a time in Mobile to prevent their attack upon that place.

After all danger had passed. Col. Cushing marched to Fort Stoddert, and thence to Mount Vernon Springs, where the cantonment was established in December, 1811. Fort Stoddert seems to have been abandoned about this time, and Mount Vernon grew more and more in military importance.

During the Creek War it was the headquarters for Gen. Claiborne with his forces; and also a general rendezvous for all troops in the southern part of the territory during the campaigns against the Creeks.

By act of Congress approved May 24, 1828, the building of an arsenal at this point was authorized.

It was regularly garrisoned, although with a small force only; and it continued of more or less importance until the outbreak of the War in 1861. In January, 1861, the post was occupied by Alabama troops.

In 1873 under orders of the Secretary of War the arsenal was converted into barracks, for occupation by United States troops. Its designation was changed to that of Mount Vernon Barracks and was occupied by United States soldiers as late as 1890.

In 1887, about 700 Apache Indians were held as prisoners, not within the enclosure but outside the walls in log cabins. Among them was their leader, the famous chief Geronimo from the Plains Wars, a picturesque figure. The Apache’s were later transferred to Oklahoma in 1894.

Given to the State of Alabama

By act of Congress approved March 1, 1895, the Mount Vernon Barracks together with all buildings and improvements were conveyed to the State of Alabama by deed executed by Daniel S. Lamont, Secretary of War, March 13, 1895, to be used for public purposes.

On December 11, 1900, the property was set apart by the legislature “for the use of the insane of the State, under the name of ‘The Mount Vernon Hospital, to alleviate the overcrowding at Bryce Hospital in Tuscaloosa. At the time, mental hospital patients were segregated and Mount Vernon was designated the hospital for colored insane or the Mount Vernon Hospital for the Colored Insane and served only African-Americans until 1969 after the passage of the Civil Rights Act of 1964.

In 1906, 57 patients died due to an outbreak of pellagra. This incident led to more research on the disease and an eventual cure. It wasn’t until the first recognized in epidemic proportions of Pellagra was identified by Alabama physician Dr. George H. Searcy in 1906 at the hospital.

In 1919, the hospital was renamed Searcy Hospital in honor of Dr. J. T. Searcy, the first superintendent.

Searcy Hospital continued to serve the mentally ill until October 31, 2012 when the entire facility was closed and abandoned.

Currently, there has been some talk of reopening Searcy.

This book is the 2nd Volume in a series of books which includes genealogical and biographical information on some Revolutionary Soldiers who were in early Alabama and/or collected military pensions for their service. Some of their descendants still remain on the bounty land they received. The soldiers in this volume include: JACOB HOLLAND, CHARLES M. HOLLAND, THOMAS HOLLAND, COL. JOSEPH HUGHES, CHARLES HOOKS, DIXON HALL, BOLLING HALL, WALTER JACKSON, WILLIAM HEARNE, THOMAS HAMILTON, GEN. JOHN ARCHER ELMORE, REVEREND ROBERT CUNNINGHAM, JAMES COLLIER, THOMAS BRADFORD, REUBEN BLANKENSHIP, HENRY BLANKENSHIP, DANIEL BLANKENSHIP with a special story about the patriotism of CHARLES HOOKS sister…MARY HOOKS SLOCUMB