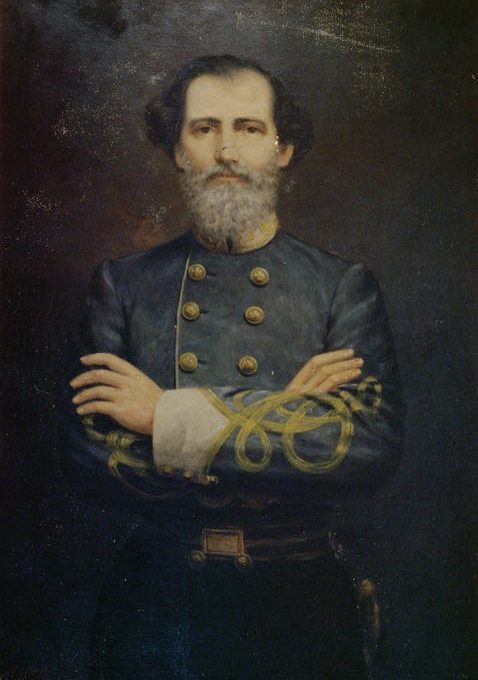 I am now quietly seated in an upper room in one of the finest houses in the far-famed city of Orizaba—a lovely place in a beautiful valley— but yet in the land of clouds—So far it is elevated above the level of the Gulph—You will see in the Southern Shield a letter published which will give you a full history of our march to Cordova—On the 4th morning after our arrival in the Town just mentioned the Ala-Battalion and the portion of the Army commanded by Capt. Henry took up the line of march for this city which was supposed to be headquarters of the Guuerillor— and before the sun went down we had the pleasure of gazing upon the lofty steeples of the many churches which are scattered all over the place—Language is too poor to convey any thing like an adequate idea of the beauty and sublimity of the scenery through which we passed on this ever memorable day

Early in the morning we set our faces toward the mountains-and in a few hours were in the midst of them-here was presented to us one of the grandest scenes in nature & one of the most stupendous national works of old Spain, tall craggy mountains were all round us-mountain torrents “raging along-all foam’-which were “seen, not heard” were on either side of us-and yet the road made but a gentle decent to reach the valley below-On either side of the road there were walls 4 or 5 feet high & almost the whole of the road there was paved with round Stone-The valley below seemed to be 2 or three miles long & ½ to ¾ wide hemmed in on all sides with mountains on which large masses of white clouds seem continually to rest-the land in this valley is exceedingly high-and here lives a very wealthy gentleman who is said to be the only poet in Mexic-he has beside 10 lovely daughters who are represented to be beautiful and accomplished-but the ascent from this little paradise is more imposing than the decent.

By standing on the top of the mountain up which the road winds you have at one view the whole valley below at your command and also every turn in the road which first forms this figure. We now entered upon the valley of Orizaba. I shall only say at this time that the city is situated m a level plain which closed in on three sides with sumptuous mountains-there are 20000 inhabitants-I have seen three fountains of cold water in the streets and others in lots belonging to individuals-there are any number of churches and, oh me they are magnificent-I attended mass today I suppose I saw a thousand people kneeling at the same time before the altar of the most high God-It was a solemn & imposing scene. The women wear no bonnets but cover their heads with a kind of checked cloth 3/4 of a yard wide & 2 long-this they throw over the head & lap over the breast and make it anser for sleeves & bodies to their dresses-the bustle is worn here in great perfection-they are a little larger than that worn by Miss B-? the people generally are of the color of mulattos— though there are some exceptions.

I had the pleasure today of seeing two of the prettiest girls I ever laid my eyes upon-one of them was a delicate little creature with rosy cheeks, fair skin-cold black eyes & hair who dressed in black and actually stood in her window from morning till night-I passed through the street 6 or 8 times & always found her in the same place-and yet she gave me no token of recognition, except occasionally to throw her burning eyes upon me, I invariably touched my hat to her as I passed and looked as love struck as .possible-the men of the better class nearly all wear round coats and are exceedingly well dressed & tidy-& extremely polite and well bred. The women have the prettiest little hands and feet imaginable.

As for myself I am getting along very comfortable my health is moderately good & there is about as little chance of winning laurels at the cannons mouth here as there is in Barbour-all I have seen yet were pointed from not on me-So you need not console yourself with the idea of having a Brother a president-I have not reed a single letter or paper from horn since I left-so write to me-Kiss all my kin for me.

1Tennent Lomax, while practicing law at Eufaula, on the outbreak of the War with Mexico, raised a company and became Captain of what was later Company D, 1st Battalion, Alabama Infantry. His company saw duty in the Department of Orizaba, when U. S. troops occupied that section of Mexico, late in 1847 and 1848. He was killed while serving as Colonel of the 3rd Alabama Infantry, C.S.A., on June 1, 1862.