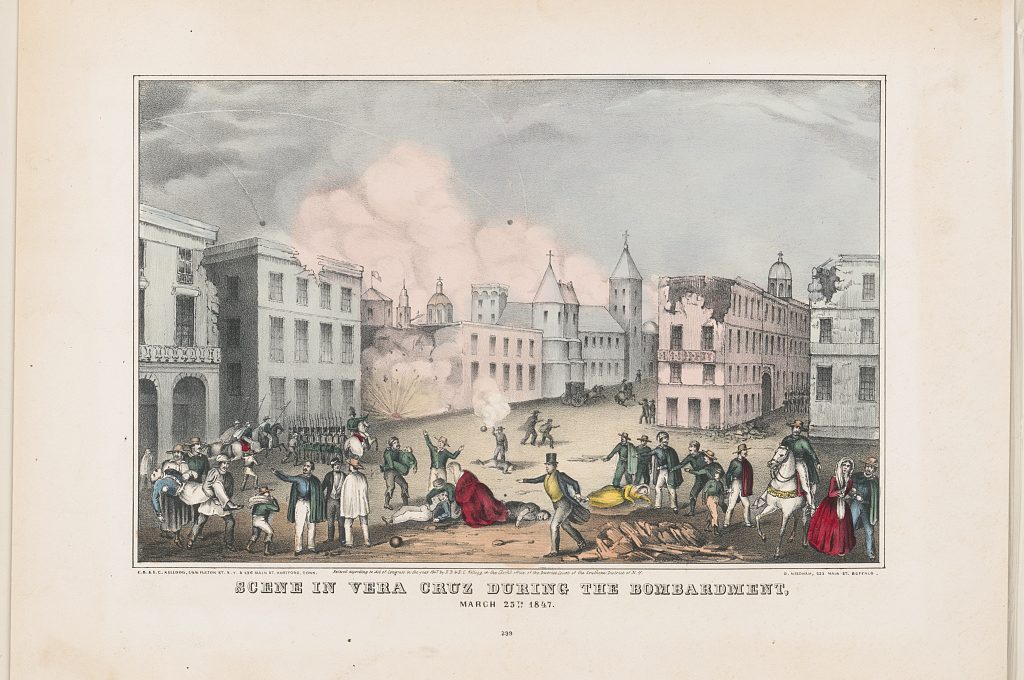 I have been astonished with no letter either from you or Dr. G. has reached me since my arrival in Mexico—but the reception of your message through Mr. Baker has removed in part this state of feeling—I deeply sympathise with you in your afflictions I know you have had a terrible time. Sick people are very exacting & unreasonable & the On is peculiarly so when very sick—But you are accustomed to trouble & have learned to bear it with patience and need no advice from me. I hope by the time this reaches you, the Dr. will be well.

I think I have written to you since I reached this place but as I am not sure of it I will give you some description of our march & of the place we inhabit—We were ordered to Vera Cruz about the 1st of the month of Feb and arrived there on the third & reed orders to be ready to leave by 3 o’clock in the morning—this was a bitter pill to men who had marched 18 miles over very heavy road the day before—we got ready however & reported ourselves to the Col. & were then informed that the Brigade would not take up the line of march till next day.

Accordingly we left on the 5. & consumed the entire day in passing the sand hills which environ Vera Cruz-for fifteen days we dragged our slow length along—& at last reached our destination—we had along with us 150 waggons & 12 hundred Infantry-4 pieces of artillery & a few dragoons Our train was generally 4 miles long-and as we rose the steep acclivities on the way or descended them, it was a beautiful sight to see it wind its slow length along—The accent to the tablelands is grand beyond description- the plain continues unbroken until you reach the very foot of the mountain—course stopped by a bold mountain trunk with high perpendicular banks of rock had not old Spain bridged the gulf & thus opened the way for the invader-Now begins the toilsome accent for miles you rise the accent along a circular path whirh hugs the side of the mountain -On your right all nature is shut up from view except the bare side of the mountain-The lower side of the road is protected by a rampart 6 feet high which seems to be a part of the rock itself-far, far below a noble stream roars along out of sight, but the old mountains roar with its melody- This is the Chiceoweta pass-It protects Cordova-a nice little town through every street of which streams of water run-it has a population of 5000 people, & is in the neighborhood of the mountains which guard Orizaba. The passes between the two places are very beautiful & magnificent but I have no power to describe them so as to give you any intelligible idea of them. Suffice it to say a brave people would never have allowed us (800 strong-we left part of our force at Orizaba) to pass through them without a battle-& yet no war cry was heard-the people were at work & hardly turned their heads to look at us as we passed by them—

Orizaha is in a beautiful valley 20 or 30 miles in circumference & is surrounded on all sides by mountains-over all of which the snowy top of Orizaba towers-the clouds seem to rise from the ground & as they roll up the sides of the mountains or rest upon their tops our souls are transported to classic land-& one wishes to make his home here.

The ladies of this city are very beautiful-though they seem to shun intercourse with us. All of them play the harp-all love to show themselves at their windows and as we pass along the streets our eyes are ravished with beauty & our ears with melody-

Our troops are fed on fresh beef & many of them are sick-Three men have died in my company, Jackson Vickers of Henry-Stephen D. Wiggins of Dale and Robert Bradley of Barbour. Ah! it is a sad thing to bury a comrade on foreign land-to leave him there to the mercy of the enemies—

Nothing to disturb peace

I suppose you would like to know something about myself There is nothing here to disturb my peace-I have everything to make me happy -plenty of friends plenty o£ homely comfort-plenty of employment but no prospect of glory-there is no sign of war here-peace is here whether it is in the U.S. or not.

Our men march into towns & take them without firing a gun- If the U.S. would just take as much territory as they want & station a few troops on it there would be an end of the war.

Give my love to all the family. Keep the little ones-write to me soon-Dont you think it is a shame that I have riot heard from you in 5 months—So far as I am concerned I would not care if the war was interminable— but I pity my men—a good many of them are sick and are anxious to go home-they look to their officers for everything & pur their complaints all into their ears-It is a place of greater responsibility than I had imagined to command a Co. a man must be as stern as Minas in the enforcement of authority—and as kind as Howard in relieving the sufferings of his men. Give my thanks to Mr. Baker & tell him I will reply to his letter by the next opportunity.

1Tennent Lomax, while practicing law at Eufaula, on the outbreak of the War with Mexico, raised a company and became Captain of what was later Company D, 1st Battalion, Alabama Infantry. His company saw duty in the Department of Orizaba, when U. S. troops occupied that section of Mexico, late in 1847 and 1848. He was killed while serving as Colonel of the 3rd Alabama Infantry, C.S.A., on June 1, 1862.