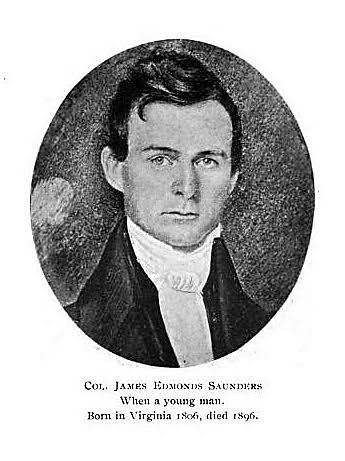 Rocky Hill Castle was built by James Edmonds Saunders, the author of Early Settlers of Alabama, which was published by his granddaughter after his death.

Saunders was born May 7, 1806 in Brunswick County, Virginia.  His ancestor, Edward Saunders, “Chirurgeon,” was already seated in Northumberland County, Virginia, in 1658; and, in 1669, as one of the justices for the county was administering both medicine and law, pari passu, and in drastic doses, no doubt. His commission from the Royal Governor Lord Berkeley as “ one of the king’s justices for Northumberlamd County” is yet preserved in the old Records at Heathsville. His descendants lived, later, in the adjoining county of Lancaster on the Wicomico River, in Wicomico Parish (which was included in both counties), and record of these is preserved at Lancaster C. H.

Edward’s great-grandson, Thomas Saunders (born 1739), removed to Brunswick County, after the Revolution, in which, he, and four brothers, served with great credit in the American army, in Virginia and North Carolina.

Rev. Turner Saunders, of Tennessee, Alabama, and Mississippi (born 1782), was the second son of Thomas, and father of the subject of this sketch.

He removed in 1808 to Franklin, Williamson County, Tenn., and with him came his brother-in-law, Maj. David Dunn, of Brunswick county, and other Virginia families, who soon formed a refined and energetic community. Descendants of some of these are, to the present day, busy making noble history for the South. His son, James Edmonds Saunders, attended Old Harpeth Academy.

In 1821, Rev. Turner Saunders built his home between Town Creek and Courtland. James Edmonds Saunders attended the University of Georgia (at the time it was called Franklin College) when Rev. Moses Waddell was its president. The following year he attended Princeton College.

Married at age of eighteen

On July 14, 1824, at the age of eighteen Saunders withdrew from the University of Georgia and married beautiful fifteen-year-old Mary Watkins.

At the age of twenty-one, he began his own practice in Alabama – first in Moulton, then in Courtland, one of Alabama’s oldest towns. His first years of practice began in Moulton, Lawrence County, Alabama. One of his earliest clients was Mrs. Leetch, the aunt of future President, James K. Polk, who became a life-long friend.

In Courtland, James formed a law partnership with Judge John J. Ormond, who later served on the Supreme Court of Alabama.

Saunders built Rocky Hill in 1832 on Big Nance Creek. . The land was first bought by Mr. Norment of Virginia and a log cabin stood on the hill prior to Saunders ownership. Norment settled there among his friends, the Butlers, Sales, Burruss, Fitzgeralds, and Booth families from Botetourt County, Virginia. The Rev. Freeman Fitzgerald and his wife Elizabeth were the second purchasers of the land called Rocky Hill. His daughter was married to Dr. Thomas Watkins, of Georgia (and Austin, Texas). His brother, Mr. William Fitzgerald, and “Aunt Letty,” his wife, lived nearly opposite Capt. Charles Swoope’s place, later the Barclay home in Wheeler, Alabama. Mr. William Booth was brother-in-law to the Fitzgeralds. All moved to Mississippi, Florida, and Louisiana in later years.

Saunders entered public life early and was elected to the State Legislature in 1835, while only twenty-nine. Mr. Saunders was also President of the Board of Trustees from the beginning of the nearby Lagrange College which was founded in 1830 by the Southern Methodist Church. He later became a trustee of the University of Alabama and served in the Legislature. In the year 1840, Col. Saunders was the acknowledged party leader in the Lower House of the General Assembly of Alabama. As chairman of its judiciary committee, his strength in a debate, and graceful bearing, gave him great distinction throughout the State.

In 1843, Saunders health became impaired so he moved to Mobile, Alabama where he appointed the collector of customs by President James K. Polk. He became director of the Bank of Mobile and formed a cotton commission house with his brother-in-law, Gen. Benjamin M. Bradford.

He served the State again as elector for Pierce and King in 1852.

War Between the States

His political pre-eminence led to his election as president of the Stephen A. Douglass Convention which convened in Montgomery, Alabama, 1860, in an effort to avert the horrors of war which hovered so near. Saunders was a strong anti-secessionist and worked devotedly to keep the South from seceding from the Union. But once the grace decision was made, he joined ranks with the Confederate government and rendered distinguished service. He went with his three sons into the Southern Army. As a colonel, he was a staff officer to General Nathan Bedford Forrest. During the battle of Murfreesboro, Tennessee, he was severely wounded, but overcame the wound and lived to be ninety years old. Col. Saunders lost his fortune at the end of the war, but he continued to live at Rocky Hill and tried several business enterprises, including vineyards. After his death, his descendants continued to live in the Rocky Hill mansion until 1926.

In 1880 Colonel Saunders began a series of letters in his local county paper relating to the Early Settlers of Lawrence County, Alabama and the Tennessee Valley. These letters continued until 1889 Col. James Edmonds Saunders died August 23, 1896. His wife Frances (Watkins) Saunders preceded him in death on February 6, 1889.

Rocky Hill Plantation was built in Lawrence County, Alabama by Col. James Edmonds Saunders. The plantation was the subject of many ghost stories including The Ghost of the Angry Architect that was published by Kathryn Tucker Windham and Margaret Gillis Figh in 13 Alabama Ghosts and Jeffrey.Col. Saunders demolished the first house he built at Rocky Hill and began building Rocky Hill Castle in 1858 because he wanted a grander home. The Civil War stopped construction and the house was used as a Confederate hospital during the war.

The following is an excerpt about the mansion from Ante-bellum Mansions of Alabama by Ralph Hammond, 1951, Bonanza Books:

A Welsh carpenter named Hugh Jones had a decisive hand in the building of Rocky Hill Castle. It was he who set the pattern for the details. He carved the pilasters, designed the arches and executed the staircase. He also built the Gothic tower according to instructions from Colonel Saunders, finished it about the time the war started. He remained at Rocky Hill Castle during the war and died there before it ended.

Many notables were entertained at the mansion during the course of the war. On one occasion the Military Court of the Army of Tennessee held a meeting there. The members attending consisted of the following: Colonel William H. Saunders, brother of the builder; Judge John Sale of Aberdeen, Mississippi; Colonel William Dowd; and the learned educator, J. L. M. Curry of Talladega, Alabama, later Minister to Spain.

General Pierre Beauregard and his staff dined there once, and a staff member, Colonel William Brent, later became the father-in-law of one of the young Saunders girls.

Thus one can readily see that the comings and goings of the war made opportune background when Ellen Virginia Saunders, who married Judge L. B. McFarland of Memphis, Tennessee, decided to write a novel called “The Little Rebel” which swept the nation and was made into a motion picture.

“The plantation passed through many owners following the death of James Saunders in 1896. The last Saunders to own it was James Saunder’s grandson, Dr. Dudley Saunders. Dr. Saunders and his family are alleged to have abruptly abandoned Rocky Hill Castle in the 1920s, purportedly after ghostly activity.” (Wikipedia)

Revised with direct links to many sources and burial sites!

Lawrence County was created by act of the Territorial Legislature of February 4, 1818. Formed from territory acquired by the Cherokee and Chicasa cession of 1816.