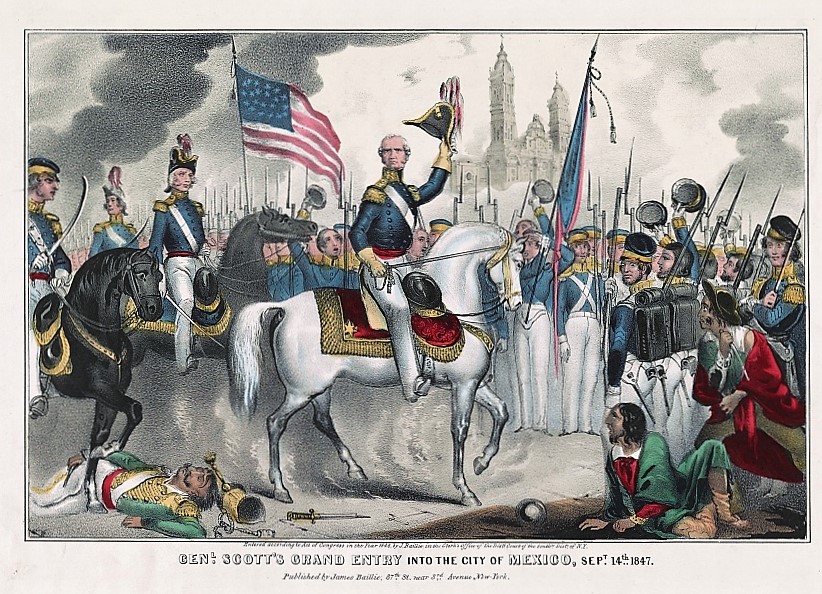 (These several contributions cover the period of February to April, 1897, and were made to the Wilcox Progressive Era, published at Camden)

After remaining several days on the table land, taking a look to the east, a grand scene was presented; a map was spread out reaching from the base of the mountain to the coast. The imagination could depict great plains covered with green verdure, vast herds of horses and cattle roamed at will, the background and shading of this picture was grand and not to be described; must be seen to be appreciated.

The Town of Cordova

The road up the mountains was the grandest engineering feat that has been accomplished in ages; the winding around the side of the mountain, going up, up, higher and higher, so gradually that all were astonished when the plains were reached. We bid adieu to the camp, marching along this table land, on a level, beautiful road with the grandest views imaginable constantly being presented.

We, at last, reached the little town of Cordova. This is where he tried to establish an American colony, the history of which is not the purpose of this article to give. Suffice it to say, had he picked the world over, not a more lovely spot could have been found. The mountain scenery was the grandest ever beheld, climate unexcelled, no healthier place exists, more very aged people, both men and women, were to be seen than- elsewhere, people who claimed to be over a hundred years old, and they looked in every way like it. Yet in this place we saw the first case of leprosy.

Cordova was an important place or pass in the event that the war had continued. It commanded a pass similar to the one leading to the City of Mexico by the upper road or natural bridge. It was a section of country abounding In such things as an army would need, Grain, beef cattle, hay, and the like. It had never been occupied by our Army, The country, both north and south, was mountainous, interspersed with numerous rich valleys, was easily protected from invasion by reason of its limited passage ways through the mountains.

Just before—only a few days—we reached Cordova, quite an army was in the vicinity. It was of sufficient strength, could an exchange have been made of circumstances and soldiers, to have wiped our little excursion party from the face of the earth. As it was, the Mexicans were whipped, demoralized, and panic stricken.

Many of their soldiers, particularly volunteers, deserted and went to their homes and families, willing to acknowledge allegiance to Americans. Many came in and received parole at the hands of our commander, Gen Bankhead. The Mexicans being good horsemen, this branch of their army was the last to yield, in fact, they never did come in and surrender as did the infantry. They scattered and broke up into banks of guerillas and robbers.

We saw the first coffee field or orchard here. This well-known article grows on trees about the size of an ordinary apple or peach, the leaves are of dark green and grow in pairs on the stem, one exactly opposite the other; the limbs grow the same way; the berries are about the size of a small plum known as the sloe, are of a bright, clear red, resembling a cherry, have every appearance of being delicious if one wanted to eat them, but is very deceiving in this. When the fruit is properly ripe it is shaken from the tree, the berries being caught on a cloth held beneath. In this way, many unripe and decayed berries fall with the perfect.

After being gathered, a place is cleaned off on the ground, the berries spread out to dry. When sufficiently dried, they are beaten put by flails and sticks, thus removing the dried pulp, leaving the seed or grain, which in commerce is known as coffee. This seed is split in two parts in the process of drying and thrashing. Each part with us is called a grain, when in reality it is only half a grain. This is the reason why we can’t get a grain of coffee to grow. It requires the unbroken berry to cause germination.

After the coffee is thrashed out and winnowed, the grains are swept in piles, hence the small rocks that are frequently found in coffee. It is the result of carelessness and not, as some people assert, for the purpose of increasing the weight. It will be readily seen that choice coffee must be picked by the slow process of the hands, either from the tree, or hand picked after it is gathered. Large piles of this beverage could be seen all around the town.

Our commissary officer bought and issued this Cordova coffee to the command, after the Rio had been exhausted. Complaints were loud against it; whether it was because the coffee was too new or gathered too green was not known; anyway it was not the article we so much loved. This coffee, now bears a better reputation in the markets of the United States than the Rio, whether justly so or not depends on the peculiarity of taste of different opinions.

Pineapples grew in abundance, as well as oranges, lemons, limes, bananas and plantains, with many other kinds of fruit, names not remembered. This was the first place we had found where fruit was cheap and abundant. One hundred oranges could be bought for six cents; the number eaten by the soldiers was incredible.

Here we found an entirely new and novel currency that passed in all transactions. This was soap, and was issued by the corporation of the city under authority of the general government; the cakes of soap were suitably stamped with inscriptions as well as the liability or penalty for counterfeiting; each piece was about one and a half inches long, three-fourths of an inch wide and a half inch thick; was of a hard, creamy pink color, and valued at one cent. Strange as it may seem, the wear was not so great as one would suppose, but it required a big pocket book to hold any great amount.

March to City of Mexico

This being an important pass, it was thought prudent to garrison it, so the Michigan regiment was stationed here. Being well rested and refreshed, and becoming restless, Gen Bankhead ordered the march toward the City of Mexico. Our road was through the mountains, where the same skill was displayed in road making as was mentioned in a previous chapter. The road was built around and up the sides of the mountains. Bridges across chasms were built in such way as to make the road level, the walls reaching down into the abyss so deep that it made one dizzy to look over. Each bridge was bordered by a parapet raised some four feet above the level of the floor of the bridge; so it was on the lower side of the road, built on the sides of the mountains.

The command, after a two days tedious march, went through the pass into the Oriziba, and intended to dispute the possession of it by Gen. Bankhead. This was about night, every preparation was made for an early attack in the morning. The excitement was great. We were raw recruits, had never been under fire, nor did any seem to desire it much, however, everyone seemed cheerful and willing to take a hand.

Took possession without firing a gun

Early the next morning Gen. Bankhead sent a flag of truce, with terms to the Mexican General, what they were we didn’t know; suffice it to say about eight o’clock we could see the Mexican soldiers in the distance, making down the valley to the south. Our command entered the city triumphantly and took possession without firing a gun. The alcalde, or mayor, or ruler, of the city, a good looking, intelligent old man, met the commanding officer and his staff, proffered his assistance in securing quarters, and turned all public buildings and property to the United States authorities. The citizens of the place seemed to be more rejoiced at the presence of the United States troops than depressed. The feeling was exhibited in many ways; the ringing of bells, shouts of joy, and other sounds could be heard on all sides.