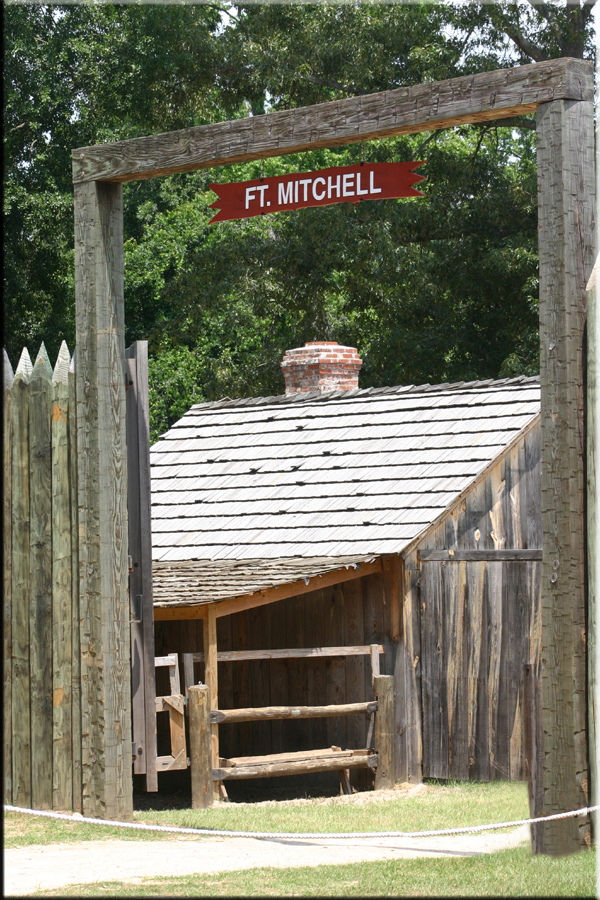 Russell County was created by the legislature, December 18, 1832. It was taken from the last Creek cession. December 15, 1866, a part of its territory, including Opelika, was added to Lee County, and several years later the village and beat of Glenville, in Barbour County.

The county bears the name of Col. Gilbert C. Russell, of Mobile, an officer in the Federal army, 1818.

Girard was the first seat of justice. The courthouse stood at Crawford until 1868, and later the seat of justice was moved to Seale. The commissioners appointed in 1833 to select a courthouse were Hardeman Owen, Anderson Abercrombie, and Thomas M. Martin.

Russell County is in the extreme eastern part of the state, and is bounded on the east by the Chattahoochee River, forming the State line, on the west by Bullock and Macon on the south by Barbour, and on the north by Lee. The county is well drained by the Alabama River and its tributary, Slosh Eye Creek, and the Chattahoochee River, and its tributaries.

The county was largely inhabited by the Yuchi Indians, who formed an important element in the composition of the Creek Confederacy. Their dialect was exceedingly peculiar and distinct from the other tribes of the Muscogee Confederacy. It was entirely guttural and spoken entirely with the mouth open. No word or sound ever required it to be closed for pronunciation.

Evidences even to the present day indicate that the section was thickly populated. On the headwaters of Big Uchee Creek in the northwestern section, on the Hachichubee Creek in the western and on the upper waters of Cowikee Creek are found numbers of indications. On what was later the Moffit Flournoy plantation on the Chattahoochee River, 8 miles by rail below Columbus, Ga., and one mile east of the Central of Georgia railroad, is the site of Coweta, the headquarters of the Lower Creeks. Scattered over a large area are yet found evidences of its occupancy.

At the Upper Coweta site, one mile up the river, was a mound about 10 feet in height surrounded by a large cemetery. Here numbers of objects have been ploughed up.

On the Uchee Creek near to and below its mouth are indications and at Perry’s Ford on Big Uchee branch of the creek, could be seen charred remains of what was locally claimed to be one of the last meeting houses of the Creeks before their removal west in 1836. Little Prince lies buried in Russell County, a large cedar stump marking the site of his grave.

The following Lower Creek towns are noted as being located in the territory now included in the county: Apalatchukla, one and a half miles below Chiaha; Chiaha just below Osatchi; Chiahu ‘dishi or Little Chiaha, a village planted by Chiaha Indians in a pine forest one and a half miles west of Hitchiti town; Haihgi; Hatchi Tchapa, a small village peopled from Sawokli and thought to have been located on the present Hatchechubbee Creek; Kawita and Kawita Talahassi, above referred to as Upper Coweta and Coweta; Le-kat-chka or Broken Arrow, located in what is now Hatcher’s Bend; Okomi, a small town six miles below Apalachukla; Osotchi, located in the extreme southern part of the county below the present Oswithee community; Sawakli, at mouth of Hatchechubbee Creek; Talua ‘Lako, the popular name of Apala-tchukla,. being the new or later day designation of the place; Watula Hoka Hatchi, a stream on which was located the Watoola village, just above big Uchee Creek, a short distance west of the present Uhland; and three Yuchi villages, in the southern sections of the county. Several towns in Chattahoochee and Stewart Counties in Georgia had villages across the river in Alabama and it is possible that some at least of the above named villages were branches of these Georgia towns.

On the former plantation of Mrs. Albison Hixon, are three large mounds. A cemetery and town site is located in the immediate vicinity. Some of the finest pipes, gorgets and stone relics in the state have been found within the county.

This section was settled mainly by immigrants from Georgia and North and South Carolina. In 1739, General Oglethorpe, then governor of Georgia visited the town of Old Coweta, six miles below where Girard now stands, and made a treaty with’ the Indians.

General LaFayette crossed the Chattahoochee at Fort Mitchell, in 1825, when he visited Alabama. Here he was met by Gen. Tom Woodward with an armed escort, of which Maj. Gen. William Taylor, took command on his arrival.

Capt. James Abercrombie commanded the Montgomery troop, while General Moore of Monroe commanded another. Many prominent citizens including Hon. Bolling Hall, of Autauga, Hon. John Murphy, of Monroe, and a number of Indians were also there. Chilly Mclntosh and fifty painted warriors met LaFayette and the Georgians on the Georgia side. LaFayette was placed in a sulky, which was drawn on the ferry boat and when it reached the west bank the Indians drew the sulky to the top of the bank, about eighty yards. After an eloquent address by Hon. John D. Bibb, of Montgomery, the line of march was taken up for the interior.

The Muscogees made their home in Russell County. In 1836 many of them refused to give up their lands which they had ceded a number of years before. The Indians began to make depredations on the whites, and Roanoke, on the east side of the river was burned and several whites were killed. About 1,500 Alabamians gathered at Tuskegee, in Macon County, and marched to Fort Mitchell under the leadership of General Jessup, Opothleyoholo, Tuskena, and other chiefs, brought in a force of friendly warriors. The combined forces marched down to Hatcheechubbee Creek, which they crossed and there formed in line of battle. An order came from Gen. Winfield S. Scott, who had reached Fort Mitchell, and taken command, for the return of Gen. Jessup and the troops to the Fort. The friendly Indians had captured Neahmathla, and his people had flocked to Fort Mitchell from which place they were escorted to Montgomery, and then taken west.

The last collision during the War of Secession occurred at Girard when Gen. Howell Cobb, with 5,000 Georgia militia and 2,000 Confederate troops, prepared to contest the advance of Wilson’s mounted column. April 16. 1865, the Federals began the attack. After two unsuccessful attempts they succeeded in taking the town, but the Confederate Generals Cobb, Buford. and T-oombs escaped capture at the hands of the enemy.

John Crowell, of North Carolina, was among the first white settlers, coming in 1815 as a government agent to the Muscogees.

The History of Alabama and Dictionary of Alabama Biography, written by Thomas McAdory Owen, was published in 1921 by the S.J. Clarke Publishing Company.

this has one. Love early American history about ordinary people…even though they were not ‘ordinary’…it took courage to populate our country. This book is well researched and well written.