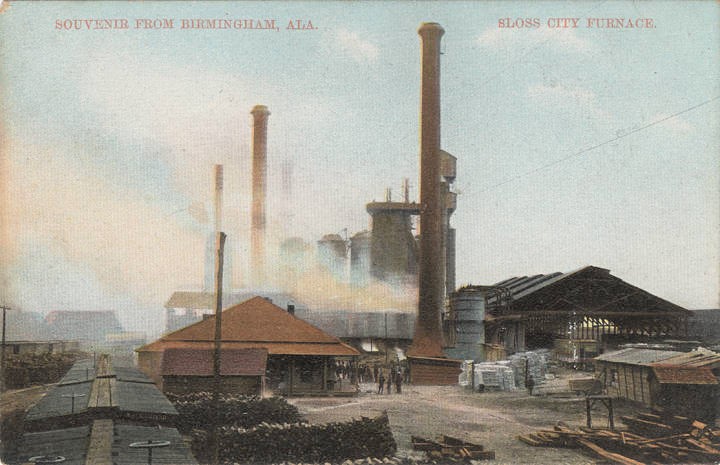 About the year 1823, I think it was, that a few gentlemen of means, MCGEE, and some others, being greatly impressed with the immense deposits of brown hematite ore in Roupe Valley, thirty miles southwest of Birmingham, determined to try the experiment of making iron on a cheap plan, as that article was very much needed by the early settlers, whose nearest market (and a very poor one at that time) was the present town of Tuscaloosa, then more commonly known as the Falls of the Black Warrior.

The company was so fortunate as to secure the co-operation of MR HILLMAN, of New Jersey, the grandfather of our townsman, and part owner and manager of the Alice Furnaces of Birmingham, one of which was the first erected here, and on a bold little stream which runs across Roupe Valley and empties its waters into the Shades Creek, near its mouth, he erected his little furnace, and with a large hammer propelled by water (which the writer has since seen in operation) hammered out a sufficient quantity of the best kind of tough metal to supply the country for some distance around. The farmers had their plows made and horses shod with it, which is probably as good a test as making car wheels; but unfortunately for MR. HILLMAN, and for the iron business in Alabama, he died soon after getting his furnace in operation, and was buried in the Baptist burying ground near the little town of Bucksville. It has been so long ago that the exact spot cannot now be pointed out, and his son and grandsons have endeavored in vain to find it in order to remove the remains to their splendid home in Nashville, and erect a suitable monument over them.

This was, I think, about the commencement of the iron manufacture in this State. After the death of Mr. HILLMAN the property fell into the hands of and afterward was run by MESSRS. STROUP & SANDERS, and finally destroyed by the Union forces, and was purchased by the THOMAS IRON COMPANY in 1868, who are now the present owners.

Near the same time, or soon afterward, a furnace was erected a few miles from Montevallo, by another one of Birmingham’s worthy citizens, MR. HORACE WARE, and afterward he was the principal party in the building up and putting in operation the splendid and widely-known iron works near Columbiana.

At an early day there was a furnace or two started near Round Mountain, near the line between Alabama and Georgia. These furnaces were all run by charcoal. It remained for MR. DEBARDELBEN and COLONEL SLOSS, assisted by JAMES and WILLIAM THOMAS, and others to utilize our bituminous coal in the manufacture of iron, which great discovery was made only a few years ago.

THE NEED FOR TRANSPORTATION

At a very early date in our history it was apparent that our great natural resources could not be developed without transportation, and Congress was applied to for assistance, and an act was passed granting a fund of three of the sales of all public lands in Alabama to be used exclusively for connecting the waters of the Tennessee River with the waters of the Mobile Bay. This act produced a large fund, which was, from time to time, paid into the State , and loaned out to companies, I think, finally lost to the State.

The plan contemplated at first to connect the Tennessee and Tombigbee by canal through a succession of valleys, which extend through our State, from north-east to south-west, but that idea was abandoned when railroads became more common, and it was proposed by some enterprising men to connect the two sections by a railroad from Montgomery to Decatur, but that idea was ridiculed by many as fanciful.

One member from East Alabama declared, in a debate in the legislature on an appropriation for a survey, that nothing but a pelican could travel the country from Elyton to Decatur, and that it would have to carry its rations in its pouch.

At last, however, several years before the war, the legislature was induced to grant the sum of $10,000 for a reconnoissance (sic)and preliminary survey of the contemplated route, and MR. JOHN T. MILNER was appointed to make it. He collected his corps and entered upon his duties, which I think consumed the best part of the year, at the end of which he made a report to the proper authorities, which was published in pamphlet form, and made the project look entirely feasible.

The estimates of the quantities of coal and iron that would finally pass over the road were almost prophetic, and have been more than realized. On of our most learned and worthy citizens and best critics, after reading it in the writer’s presence, removed his spectacles from his brow and remarked: “Well, if MILNER wrote that, he must be a swinged cat, and deceives his looks most egregiously.” It is unfortunate that so few of these pamphlets are now extant, as they would be interesting reading. It would be too tedious to enter into a detailed account of the difficulties encountered in its construction. MR. MILNER was the chief engineer, and has lived to send, himself, a great deal of the freight which he predicted for the road. The names of BARLEY BOYLE and COLONEL JACKSON will long be remembered in connection with its construction.

THE WAR BETWEEN THE STATES

At the beginning of the war this road was approaching the mineral region of the State, which caused the development of the Cahaba Coal before that of the Warrior Coal Fields. About this time the company constructing it conceived the idea of erecting iron works near Red Mountain, and did erect two rude furnaces during the war at a point seven miles south of Birmingham, and named the place Oxmoor. One of the furnaces was run awhile, but was destroyed in March, 1865, by Wilson’s army. The experiment had not been encouraging up to that time, as the company was imposed upon by incompetent persons desiring to keep out of the war. It was not until it fell into the hands of MR. DEBARDELBEN and his associates that it began to show profitable results. Its history since that time is well known. The last company also established themselves in the coal and coke business at the PRATT mines, and demonstrated to the world the fine qualities of the coal of that region. Since the war large investments have been made here by capitalists in mineral lands, but much remains unsold at low prices.

About the month of July, 1868, there came to the house of the writer, on foot, with blistered feet, a fine-looking, middle-aged man who reminded me very much of WALKER K. BAYLOR, who is well known to all of our old citizens. He told me he was worn out and tired and wanted to rest, and had heard something about the Red Mountain and wanted to see it; said he had been engaged several years of his life in constructing the Memphis & Charleston Railroad, and for the last four years in fighting the Yankees and had got whipped. He said that he had belonged to GENERAL POLK’S staff, and spent all his money in providing for the necessities of the soldiers, and that his name was TOM PETERS. He was quartermaster for the corps, I believe. After a night’s rest, we went up on top of the mountain, and while standing on the twenty-foot bluff of red ore he exclaimed, in the supposed language of the Indian chief, “Here we rest.” He afterward made that point his headquarters, for a year or two, and soon effected a sale of the Roupe Valley property, which put him in funds and gave him a start, and he probably did more to bring the capabilities of this region for manufacturing purposes into notice than any other man. His untimely death is known and regretted by all.”