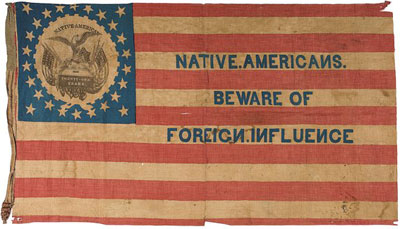 The rise of a new political party took place called the Know Nothing Party in 1855.  This political party was an anti-establishment party – here are the details about its short existence in Alabama.

THE KNOW NOTHING POLITICAL PARTY

(Transcribed from FIFTY-FIVE YEARS IN WEST ALABAMA printed in the

In 1855, Tuskaloosa  (Tuscaloosa) county was represented in the House by Newbern H. Browne and E. A. Powell.  I suppose, however, it may not be considered amiss to say a few things in regard to the canvass of that year.

With Mr. Powell it was his first appearance before the people, and with Mr. Browne the second. Old parties were passing through an ordeal that looked very much like disintegration. The requiems of the grand old Whig party were being sung, and the very pillows that supported the old Democratic structure were leaning and tottering, and many an inspiring Democrat rushed out of the Hale in order to escape the crushing effects of the fall. But where were they to go, that was the question. But the doubt was soon resolved.

A New Political Party is born

There appeared on the political canvass the picture of a rising party, as beautiful as the blushing maiden adorned for the marriage festival, and oh! and oh my! what a rush there was among the aspiring young patriots to make the acquaintance of this enchanting political Goddess.

What a rush on the part of young Democracy to crowd out all other aspirants. Nor was there less eagerness on the part of the Whigs to be first at this new political shrine. The name of the fair enchantress was “Know Nothing’”or more properly speaking “Native American Party.”

All the candidates for the Legislature and all the county officers, save old uncle Jolly Jones, who could not be persuaded or driven away from his old Jackson Democracy, joined the new party; even the gallant and rising young giant of Democracy of that day, our present worthy Probate Judge was one of the earliest to seek the new party, and none of us were more eloquent in loudly proclaiming to the people the superior virtues of this new aspirant to public favor than he was.

One of the candidates for a county office was running without opposition, holding himself out all the while as a member of the new party, up to the close of the canvass on Saturday before the election, when he announced his withdrawal from the party and his intention of returning to the old Democratic ranch.

As a backwoodsman would say here was a “delemmer. ” The tickets had all been printed with this candidates name, and had been distributed to the different precincts. But “where there’s a will there’s a way,” the energetic political managers set to work and before midnight had improvised another candidate, printed new tickets and started runners to every precinct with the new tickets and bearing the news of the old candidate defection, etc. The result was an overwhelming majority for the improvised candidate.

But the success of the new party was of short duration. The politicians still adhering to the old Democratic party at once raised all manner of denunciation against it, arousing the whole Catholic influence in the country, the entire foreign influence, and appealing to the uninformed in such a way that the new party fell beneath the crushing weight.

Historical marker in Kentucky about Know Nothing Party 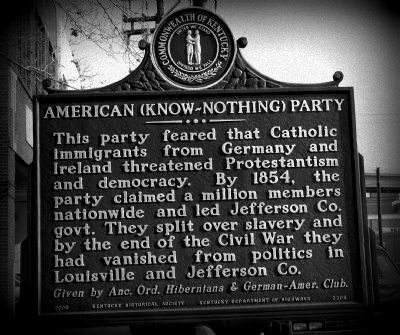 Wise, the old Whig of Virginia, who had a few years before deserted the old party and gone over to the Democrats, in the Gubernatorial race of that year had defeated the candidate of the new party, Hon. Thomas S. Flournoy one of the idols of Virginia Whigery. In the same years, Andy Johnson defeated Tennessee’s most brilliant and argumentative stump speaker, Hon. M. P. Gentry, each by a considerable majority, the prospect was certainly gloomy.

Democrats returned for many reasons

Looking back to those times it is amusing, even at this day, to remember the various reasons given by the returning Democrats for their joining and leaving the new party. In most cases, the reasons were satisfactory to the parties themselves, whether they were to others I will not say.

Historic marker in Kentucky about Know Nothing party 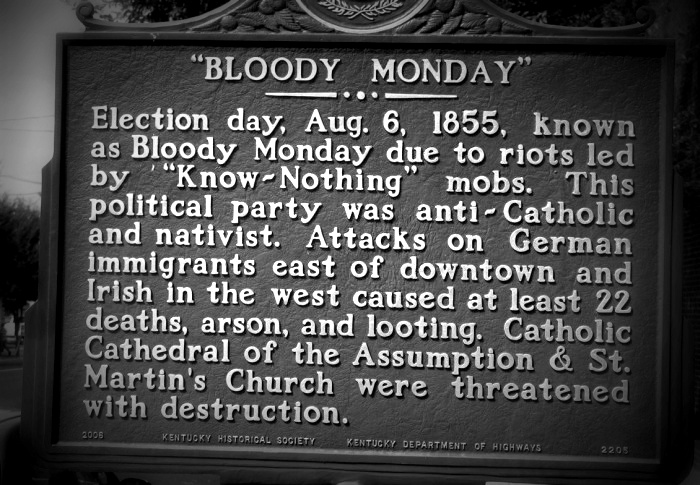 It is even now laughable to think of meeting my democratic friends on the streets, and although we had been warring against each other politically for years, I would hear the salutation “How are you Mr. P—?” at the same time approaching me with extended hand, which on being taken, he would give the K. N. grip, which being answered, the question would come, “Where did you get that?”

The same question being thrown back at him, he would answer, “I don’t know, do you?” “No,” would be the response, “and followed by the lapel or eye brow sign the parties would know each other as the disciples of “Sam.” For one I am a “Sam” to-day, and take back nothing of the principles advocated by me on that subject in that memorable canvass.

Bestselling novel RIBBON OF LOVE: 2nd edition – A Novel of Colonial America (Tapestry of Love Book 1) is the story of a first family in colonial America who eventually migrated to Alabama. –