The dictionary says that prayer is an approach to deity in word or thought:  an urgent request.  It defines warrior as a person engaged or experienced in warfare.  Many churches have prayer warriors. They are the ones you want to pray for you when the need is urgent and even when times are seemingly good.

In 1953 I had completed 3 years of college, became very sick and could not return to school.  My temperature rose to 104, ice was packed around me, and the skin peeled off my feet.  I missed the start of the next semester of school, lost my military draft exemption and was drafted.  I needed prayer warriors during my sickness and I surely needed them as I went into the Army.  I made it through basic training at Fort Knox, KY and found out the Army’s aptitude testing doesn’t mean much.  I and many others in our unit were sent to Cook School.  After the training, my orders were to go to New York Grand Central Station by train and then to Fort Devens, Massachusetts by bus.

She arranged for us to travel together

The trip to New York was really great.  My brother’s future Mother-in-law knew of two beautiful young ladies who were going on the same train to New York.  She arranged for us to travel together.  At night you get a little sleepy sitting in a seat listening to the clickety-clack of the train.  I could not sleep.  My travel companions sat on each side of me and put their heads on my shoulders.  I just could not keep from peeking at the facial expressions of the people on the train as they passed us in the isle. 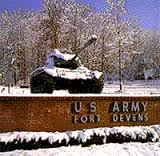 After I started my assignment at Fort Devens I was coming on duty at noon to help the cooks feed the troop’s lunch.  The lunch cooks had forgotten that gravy was a listed item on the menu.  The mess sergeant told me to get the sludge from the grease trap on the floor and put it on the line for gravy.  I refused twice to do that.  No one said anything more to me and I found out later by a friend that I had been demoted.  It was certainly a time for prayer and support from prayer warriors.

A couple of weeks went by and an officer came to see me (evidently he had heard about the “gravy” incident) and asked me if I would like to come and work for him in the Officers Mess, things were certainly improving.  This officer trusted me enough to drive his wife and small child off base to do shopping.  He knew that I didn’t drink and gave me the key to the officer’s club so that I could keep up with supplies.

Things began to get serious

Things began to get serious since this outfit (278th RCT) was an infantry combat team and was being prepared for Korea.  The 278th was originally a Civil War outfit from Tennessee.  Their motto was “Firstest with the mostest”.  I continued to pray and ask for prayer warrior support.  When we returned from war games at Fort Bragg, North Carolina a chief warrant officer would come in the mess hall about 2:30 in the afternoon.  I would always fix him a steak sandwich (no charge).  From then on, whenever my unit went to do war games he would transfer me to another company to keep those free steak sandwiches coming.

I got four days leave

In the Christmas of 1954 I got 4 days leave.  I loaded my 1952 Studebaker with food and drink and headed home to Kentucky.   I had heard that the Pennsylvania turnpike had been completed and although it was not yet on any map I knew it connected to the New Jersey turnpike.  My trip home would be over 1,000 miles and I intended to do it non-stop except for gasoline.  Going home would be a little different this time, since I had received a “Dear John” letter from the one girl that I had dated for three years.  I drove through Massachusetts, New York, down the New Jersey turnpike and found a temporary sign leading to the Pennsylvania Turnpike.  There was another sign that said “No Improvements” (meaning the road ahead would be desolate).  It had been dark for several hours and as I entered the new highway there were no signs or no lights of any kind anywhere and dark clouds covered up the stars and moon.  The only light to be seen was from my headlights.

I began to pray for help

After about 30 minutes my headlights started to dim and almost go off, over and over.  I was not a stranger to prayer since I had accepted Christ at age 13 and prayed on a regular basis.  I began to pray continuously to God for help.  Any delays for repairs would negate my trip home and missing my scheduled return to base would cause all kinds of problems.  There was no way to alert prayer warriors and I kept praying for the car’s alternator to last.  Finally the lights came on bright and stayed steady.  I kept praying as I continued through West Virginia and on to Kentucky.  Hours later, at daybreak, the alternator quit, just as I was rolling onto my parents driveway!  This has always had a major impact on my life. 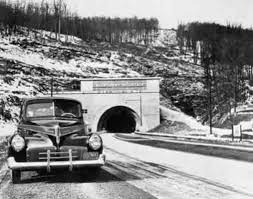 In 1957, when I was discharged, I went home by the same route, except this time I went during daylight.  I have always remembered people by their car and can recognize various makes and models from a distance.

For some reason it felt good

When I got to a straight stretch of road in West Virginia there was a car coming toward me that I recognized.  It was the “Dear John” letter sender and her husband.  I honked my horn as we passed.  For some reason, it just felt so good.  That horn blast celebrated a new beginning for me.  It was the wrong time of year to re-enter college so I looked for a job.  Of all things, I ended up working for the same railroad that took me and those young ladies to New York.

After I completed college I got a job with a telephone company and married the pretty girl who lived two doors away from my parent’s home and we had three children.  There would be many trials in life to face together and many happy moments to enjoy.  My wife and I have just celebrated our 51st anniversary and we can emphatically say, “Thank you God for your love, forgiveness, faithfulness, our family and the support of the dedicated prayer warriors”.

Are you looking for last minute Christmas gifts? Books make great gifts! Click here to check out all our books available on Amazon and if you are a member of Amazon Prime, you can receive tw0-day FREE SHIPPING!

I was born in Ashland, Kentucky in 1932.  I graduated from the University of Kentucky in Industrial Management.  My first job was with General Telephone Company of  Kentucky in Lexington, entucky.  My next job was with Humana Health Care System in Louisville, Kentucky.  I came to Birmingham in 1978 as Director of Management Engineering for the Baptist Health Care System and years later held the same position with Eastern Health Care System.  When I retired, I began driving a school bus for the Mountain Brook School System and later became their Director of Transportation.  My current work status involves a vast array of “honey-do” projects.   My faith in God and all that surrounds it is a large part of my life.  My wife and I are active members of  The Church at Brook Hills.  We have 2 sons, 1 daughter and 1 grandchild and celebrated our 50th wedding anniversary this past June.   Fishing has been a hobby of mine since I was 13 years old and I continue to do that.   My other favorite hobby was motorcycle riding which I had to give up when I was 72 years old due to losing my balancing ability.