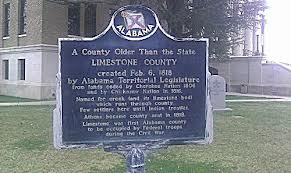 MEMORIES OF THE MOVE TO OKLAHOMA INDIAN TERRITORY

Submitted by Martha Ivey Blount. Taken from a 1966 Davis family history compiled by Posey Oliver Davis (1890-1973), a first cousin of the author.

Note: Guy Davis (1889-1969) was one of the four children of Isaac Eziekel “Zeke” Davis and Nancy Jane Barker to make the below-described journey. His mother was reluctant to leave Limestone County, Alabama for a place unknown as she feared she would never see home again. Her premonition was correct. In March 1902 she birthed twins. One died after a few days and Jane succumbed a short while later. Both are buried near Otter Creek in Snider, Oklahoma. His wanderlust not satisfied, father Zeke moved his five children on to Texas where he remarried and had another child.

Much time (66 years) has passed since we travelled in a covered wagon form North Alabama into Indian Territory, now Oklahoma. We started on October 16, 1900.

I still remember many of the hardships and dangers we encountered along the way. Most of the roads were only cleared trails through forests. When we arrived at streams considered fordable, Dad would unhitch one of the horses (two big bay mares) and ride across to see if the wagon box would clear the water. If too deep, we waited a day or two for the water to lower, and then moved on.

The horses’ legs got sore due to being in mud and water much of the time. They contracted a disease called seratches. The hair fell out. From their knees down were raw sores. Twice we stopped two or three days to let their sores heal.

Obtaining and preparing food for a family of six on a journey such as this was an arduous task. Sometimes it was days between stores, and it was tin cans for food.

We started with some dried fruit, rancid pork butchered the previous winter, several pounds of lard, a ten-gallon can of flour. A jug of home-made molasses was our only sweetening. 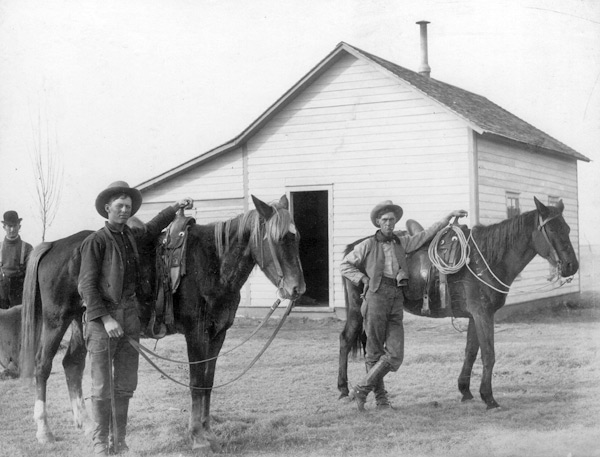 Most of our fresh meat consisted of what game Dad could kill while walking in front of the wagon, and hunting while the horses rested. It consisted of squirrels, rabbits, o’possums, coons and occasionally quail and doves.

Our cooking utensils consisted of two kettles, a frying pan, a Dutch oven with a heavy lid for hold embers. They were all cast iron. All food was served in tin containers.

In addition to our cooking utensils we had hand tools, such as axe, hoe, and shovel. A log chain was very valuable in different ways. When our wagon got stuck where the horses didn’t have sound footing to pull us out, we used the chain to get them on dry ground ahead where they could pull better. At times when other wagons were along with us, we hooked them together into a train and hitched the horses in tandem which was helpful.

We found a few campsites with clear water and forage for horses. We tried to keep ear corn for feed. Forage in most places was not too difficult to get. Horses drank from streams that we crossed which made horses water much easier.

We bought food along the way

We kept a keg of drinking water on the side of our wagon. Vivid in my memory is that of my Mother boiling water for health reasons. In spite of her precaution Clifford came down with typhoid fever at Lawton and was near death of days but finally recovered. Mother made sour dough biscuits in place of sour milk. We bought food along the way when needed and when available which was no too much of the time. So we just did the best we could, for food and otherwise.

One night we were camped near a stream in Arkansas when we saw two men coming up the stream in a canoe with a kerosene lantern for light. Being a bit too jittery we suspected trouble and Dad got ready with his shotgun; but, much to our relief, they came on a friendly mission. We should have known that with a light and in the open they were at a great disadvantage with Dad in the dark away from the wagon with his gun in hand.

It rained much along the way and dry wood was scarce which made cooking on an open fire difficult. Many times a fire could not be built even with pine knots which were really valuable.

They told us horrifying stories

Along the way in Arkansas we met many covered wagons returning from Indian Territory to the states from whence they came. They told us horrifying stories about “no chance to establish a home and make a living among the wild Indians.”

There was some truth in their Indian stories. They did not want white people to settle upon their land and would try to scare them away. Thrice during two weeks Indians suddenly appeared from hiding on horses with their faces painted many colors. Their long black braided hair extended more than half the length of their bodies. They wore feathered war bonnets. They circled our wagon a few times yelling and screaming, waving guns, bows and arrows, and pointing for us to go back.

I don’t remember if we were frightened more by the Indians or by the coyotes the first night we heard them. We thought the howling coyotes were Indians coming to get us. When we learned later that the noise was made by coyotes, it gave us great relief.

We did not turn back for the reason that Dad said that if they intended to do more than try to scare us away they would do it regardless of the direction we were going. He put his double barrel muzzle-loader shot gun across his lap, in full view of the Indians, and drove on. They did not return after the third effort failed to turn us back. A few days later, we met some friendly Indians who welcomed us.

The big harm the Indians did settlers was to steal their horses and hold them for a ransom. They stole our horses once. Ten days later  Dad offered a ten-dollar ransom for them. They collected the reward and told us where to find our horses.

Mother was a most patient tent keeper

We bought a 10 x 12 foot tent in Anadarko and moved in to it. The ground was wet and cold, but it was better than six living in a wagon bed. It did not take much snow to crush it in. High wind blew it down several times. Mother was a most patient tent keeper and seldom complained about the hardships we were enduring.

I well remember how happy we all were when Dad came into our tent and told us that he had a job helping build the Rock Island railroad stretch toward Fort Sill. His pay was a dollar for working only ten hours. Railroad workers lived in tents and moved south as the dirt work was finished. By the following spring the work was finished to Fort Sill.

We had our tent pitched just south of the Fort where we stayed  until after the drawing for land was finished. While there I  helped Dad and another man cut grass hay on the site where the present city of Lawton stands. We sold it to the government at Fort Sill.

When Lawton town site was designated, we moved our tent to the site and dug a water well and sold water for five cents per three-gallon bucket, one cent for as much as a person could drink, and five cents to water a horse. This well was the first water works in Lawton which was a town of 100 tents the first year.

There are many things more valuable than gold on a journey such as this. The most valuable was a good double barrel muzzle-loader shot gun and an abundance of shot, black powder and percussion caps. Ours was beyond comparison to the gold we had. Gold has no value when it cannot supply protection and the necessities of life. The shot gun was the judiciary and executive law understood and respected equally by the Indians and whites.

It took two years to get the one-room school started

Dad was fortunate and drew a number entitling him to select and file on a 160-acre tract. He located a level area near Otter Creek five miles southwest of where Snyder was later located.

It took about two years to get the first one-room school started in a crude building. We sat on plank benches and faced a plank nailed on a wall for a desk.

Dad and Mother left Alabama and came west in quest of level, fertile and productive land, as others did. This level, productive land was a lifetime ambition accomplished at the end of our pioneer journey. We made a home and developed a farm and lived there for eleven years before selling and moving to Bronte, Texas, and later to San Angelo, Texas.

Our first house was only two rooms, but it was better than tent-living which we had done for years after sleeping ten weeks every night in a covered wagon. We, the same as all settler, lived in our tent while digging a water well on our land. Our second one had good water.

One who has never experienced that sort of life can never appreciate it or feel it. Indeed we were real pioneers from the time we left Alabama until we got into our own home in Indian Territory and for a time thereafter. But never again for me, and, I hope for you.