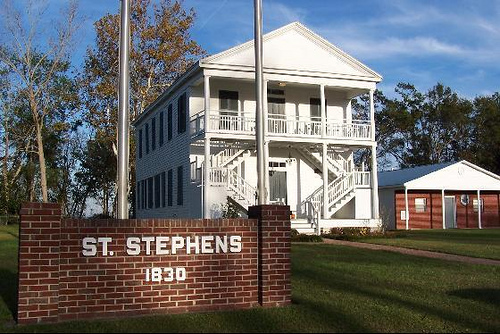 This story can also be found in the book Alabama Footprints: Immigrants

St. Stephens – First And Only Capital Of The Alabama Territory

The town of St. Stephens, located about 145 miles southwest of Montgomery, Alabama in present-day Washington County, was known as the most prosperous town in the whole area in 1817. Historian Brewer, not recognizing any French occupancy, states that St. Stephens was first settled by the Spaniards who built a fort about 1786.

The booming town was designated as the first and only capital of the new Alabama Territory. St. Stephens was situated on a limestone bluff called Hobucakintopa by the Native Americans. It had a long history of settlement. The town became a cotton market where supplies could be obtained. Barges from forty to fifty feet in length ran on the rivers, propelled by long poles furnished at one end with a spike and the other with a hook. 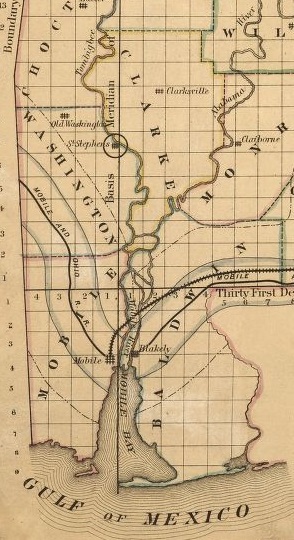 St. Stephens stood at the head of schooner navigation on the Tombigbee and was established as a trading house in 1802. It was designed specifically for the Choctaw Indians. At the time it was called a factory. Joseph Chambers was appointed superintendent and Thomas H. Williams, brother from North Carolina, was his assistant. In the spring of 1805, George S. Gaines of Virginia was appointed assistant.

“The parsonage of the old Spanish church was used as a skin-house, and the block house was used for a government store room. In 1807 Gaines became what was called the principal factor. He had an assistant, a skin-man or fur and hide tender, and an interpreter. The tender of furs and hides examined the goods carefully during the summer, sorted them, and in the fall packed them in bales for shipment to Philadelphia.”

The articles brought for sale or exchange by the Choctaws, were furs and peltries of various kinds, bears’ oil, honey, beeswax, bacon, tobacco, and ground peas. In 1809, the products amounted in value to more than seven thousand dollars. To avoid the payment of Spanish duties at Mobile the Government arranged a line for conveying goods to the ware-house and trading post down the Ohio River, up the Tennessee to a point called Colbert’s Ferry. There the goods were put on pack horses and sent along a horse path through the Chickasaws land to Peachland’s, upon the Tombigbee, then by boats to St. Stephens.

In 1811 St. Stephens consisted of three houses; four years later it boasted of nine; and in 1816 the number had grown to forty.1

Among the laws of 1807 was an act for laying out a town in Washington County near Fort St. Stephens. The streets were to be not less than one hundred feet wide, and on the lands of Edwin Lewis, John Baker, James Morgan, and John F. McGrew. These four men were appointed as the commissioners to lay out the town.

Historian Albert J. Pickett states that when St. Stephens was laid off into town lots a road was cut to Natchez. An act was also passed to “incorporate the Mississippi Society for the acquirement and dissemination of useful knowledge,” An act was passed to establish Jefferson College, and the town of Natchez was incorporated into a city. Harry Toulmin, James Caller, and Lemuel Henry, were appointed to locate and open a road from Natchez to Fort Stoddart. From these various acts it is evident that settlements had increased and civilization was advancing.

At this time the cultivation of cotton was rapidly taking the place of the older product indigo; the raising of indigo on the old Spanish and British plantations was abandoned. The inhabitants of this wilderness were now becoming strong in feeling and action. In the year of 1807, after the attack by the British on the American vessel, the Chesapeake, James McGoffin, a resident of St. Stephens, drafted some patriotic resolutions for the citizens of St. Stephens. “Both whigs and tories, participated in an animated public meeting at Wakefield, and pledged their support to the United States to avenge this outrage.”

The first and second Legislative sessions met at St. Stephens. While little was accomplished at the first session since James Titus of Madison County was the only member of the upper house in attendance, the second session which met November 2, to 21, 1818, was well attended.

At the second session:

In 1818 St. Stephens had about 1500 inhabitants and by 1819 it had more than 500 homes, nearly 10 times the number it had in 1815. The town boasted a population of several thousand with around 20 stores and commercial establishments, “including two hotels, legal and medical services, a theater, and the Tombeckbe Bank.”3

Additionally, when the first state assembly adjourned at St. Stephens on February 14, 1818, many people thought the capital should be moved to a more central location within the state. Plans were made to move it to Cahaba. By 1833, the prosperous Alabama Territorial capital of St. Stephens was reduced to a small village, and after the Civil War, the town of New St. Stephens largely replaced the old site while the old town was in virtual ruins.