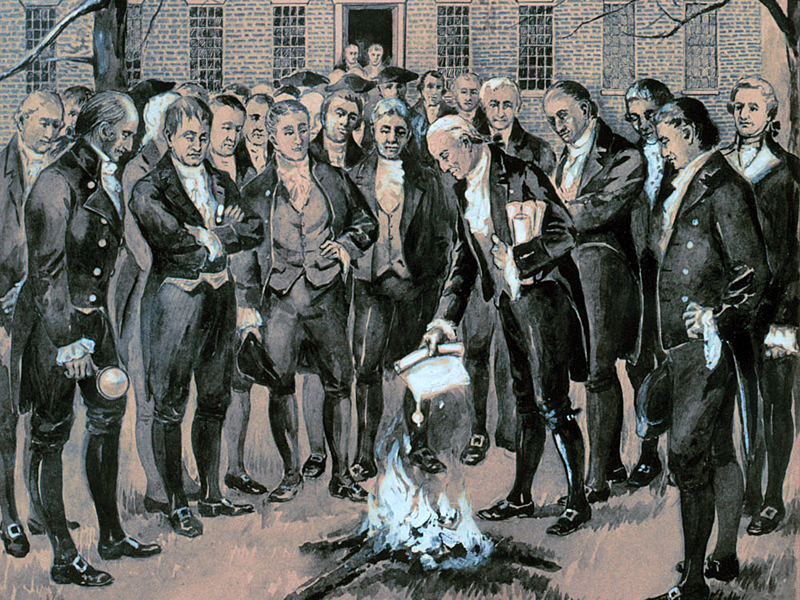 When peace finally came between the United States and Great Britain, the colonists acquired the territory east of the Mississippi and north of the 31st latitude. Spain disputed the United States claim south of the latitude of 30-28 and only released the claim after Gen. Thomas R. Pinkney visited Madrid in 1795. Spain continued to hold some control of the disputed territory until 1798. (Continued below)

Rush to the West

There was a tremendous rush of people to the West after the Revolutionary War. The state of Georgia immediately asserted her ownership to the immense region between the Chattahoochee River and the Mississippi River which included the future State of Alabama and began to make preparations for colonization. 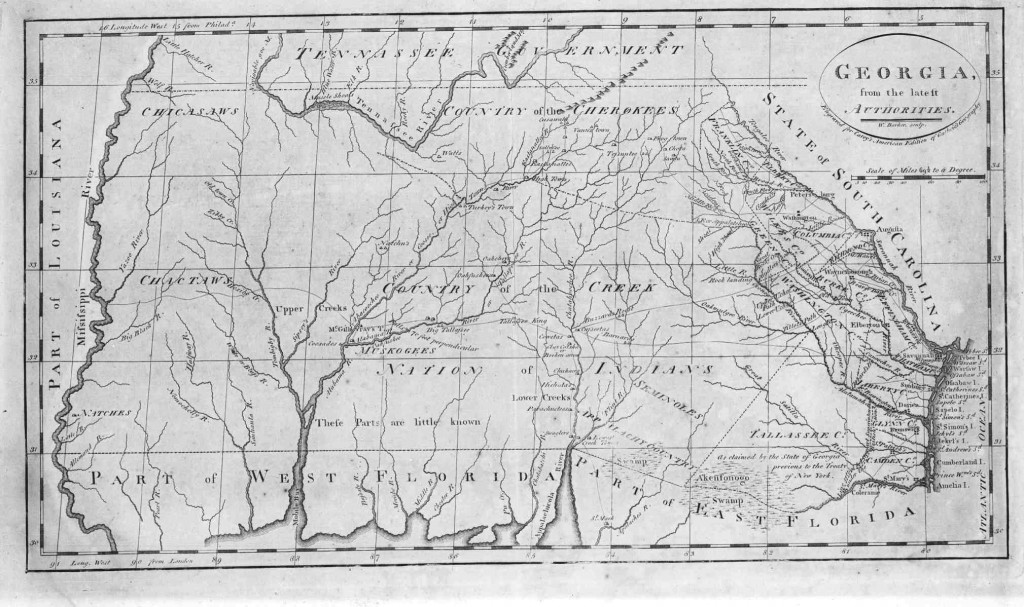 In 1785, a party of settlers set out into the wilds of Alabama to organize counties. First, they organized the portion all the portion of Alabama lying north of the Tennessee River into a county they named Houston after Governor John Houston of Georgia. Muscle Shoals was the first seat of government in this county. Houston did not remain a county for long due to slow immigration and the early settlers’ fear of the Indians in the wilds of Alabama. The settlement was abandoned and the party returned to Georgia.

Since it was difficult and dangerous for settlers to go alone to the newly acquired land, an excellent opportunity became available for land speculators to get control of large bodies of land, organize companies of people who wanted to migrate, and thus secure permanence and safety to the new settlements, and incidentally make huge profits on the land they sold to settlers.

Four land companies in the state of Georgia in 1789 were organized for the purpose of buying from Georgia parts of the western territory of the United States. The land which they desired to obtain was in the neighborhood of the Yazoo River, and on that account, the companies were called Yazoo Companies.

The United States government claimed all of the western territory, but Spain was still in actual possession of part of the Yazoo land so it was easy to persuade the Georgia legislature to sell any claim the state had in the land. The Yazoo Company succeeded in acquiring deeds to 14,400,000 acres for the insignificant price, $207,580.

In 1795, President Washington discountenanced the sale of western lands to settlement promoters, on the ground that the states had no right to sell lands in the possession of the Indians without first buying their rights, and because it was feared that colonies planted so close to New Orleans might come under the control of Spain.

There was a great deal of dissatisfaction at that time among the Americans who had settled on the Mississippi River, on account of the fact that Spain controlled the Mississippi and would not allow them to use the river for their commerce.

Indeed, Spain tried to detach the western settlements from their allegiance to the United States by offering to give them the right to use the river if they would become Spanish subjects.

In spite of these objections, the Yazoo Land Company made a concerted effort to secure possession of western land. James Gunn, a United States Senator from Georgia was the leader of this group. Their scheme was successful and the legislature granted the company 40,000,000 acres of land, for about $500,000. The state gave no guarantee against Spanish claims and was not to be held responsible for peace with the Native Americans.

Later information yielded that “a small body of twenty senators and thirty-four representatives were bribed to make the sale through the means of gifts, money or shares in the land companies. It was said that “In the lobbies of the Senate and House alternately were seen a judge of the Supreme Court of the United States, from Pennsylvania, with twenty-five thousand dollars in his hands as a cash payment; a judge of the United States District Court of Georgia passing off shares of land to the members for their votes, and a senator from Georgia [Gunn], who had perfidiously neglected to proceed to Philadelphia to take his seat in Congress, and who was absent from his post until the last days of its session, bullying with a loaded whip, and by turns cajoling the numerous understrappers in speculation.”i

“Even before the governor signed the act, there were indications of popular disapproval. A number of prominent citizens protested against the measure, William H. Crawford among others. Governor Matthews was strongly censured for signing the bill.”ii

Many were against the Act

A state convention met soon after the passage of the Yazoo act and condemned the sale, and it became the issue in the elections the next year. General James Jackson, one of Georgia’s U. S. senators, felt so strongly about the act that he resigned his seat in the Senate and returned home to lead a movement to repeal the act.

A rescinding measure was passed in February 1796 and the purchase money paid into the Treasury of Georgia was ordered to be refunded. People throughout the United States began to voice their anger over the act so the Yazoo speculators, after receiving their grants, fled to other sections of the country where they were able to sale their holdings to unaware purchasers at enormous profit.

Georgia followed other states at this time, and surrendered all her western claims to the United States government for which she received $1,250,000 and the Indian title to her reserved territory was extinguished. Thus the Yazoo Fraud became a national issue.

Yazoo claimants swarmed to Washington declaring that they owned the land Georgia ceded to the government and for a number of years, Congress was besieged with petitions from people seeking redress. Representatives of Georgia, of whom the future 1st governor of Alabama, William W. Bibb, was one, firmly opposed any appropriation to settle the claims.

A commission was formed to look into the Yazoo matter in 1803. Their report stated that all the lands had passed out of the hands of the original speculators and on the face of the deeds a provision declared that purchasers should have no claim against the speculators ‘by reason of any defect in their title from the State of Georgia’ thus making their claims invalid.

The commission was concerned about the tranquility of those who inhabited the new lands so they urged recommended that $5,000,000 be appropriated to settle the claims and end the controversy. Congress did not share their view and did not appropriate the funds.

Finally, the case was taken to the Supreme Court and Chief Justice Marshall handed down the decision which held that the rescinding act was unconstitutional in that it impaired the validity of a contract. Following this decision, Congress passed an act in 1814 that appropriated $5,000,000 to settle all Yazoo claims. The act required that the money should be raised from sales of the land in question.

This story and more can be found in ALABAMA FOOTPRINTS Pioneers: A Collection of Lost & Forgotten Stories