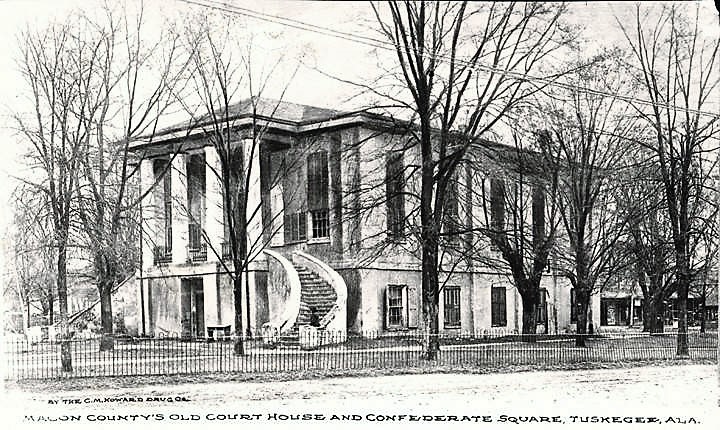 Messrs. Darby and Price, of Tuskegee, the proprietors of Darby’s Prophylactic Fluid, have published a small pamphlet, or business circular for that flourishing little town, in which are some interesting reminiscences of its early days, a few of which we select:

The Legislative Act for organizing the County of Macon passed during the session of 1832-33. The town of Tuskegee was selected for the county site, and laid off into lots and streets about September, 1834, by Laird W. Harris, first surveyor. The name was transferred from an old Indian town to the newly organized village.

Major J. Dent built the first house that was erected within the original plan of Tuskegee. It stood on the corner now occupied by Brewer’s Hotel, and in accordance with the prevalent architectural style of that primitive period, was a double log house. The first framed dwelling house in the town was built by the late Peter C. Harris, on the spot now covered by Judge Tate’s finely improved residence. The first store of which the town could boast was kept by a Mr. Bryan, about the spot where Dr. Thomas’s Drug Store now stands. It was a log house.

Mr. William Hudson kept the first post office in Tuskegee in the older part of the Hotel now tenanted by Mr. W. B. Starke, a structure which was erected in 1834, by James B. Robinson. The house now known as the Yellow Corner was the first framed store in the

The house now known as the Yellow Corner was the first framed store in the town, and occupied at that early date by Mr. James P. Cobb. The first temple in which ardent litigants worshipped at the shrine of Themes, was a log building on the site of the present brick law office Messrs. Menefee and Gatchet. It had a dirt floor, covered with pine straw, and there his honor, Judge Clough, long dispensed the even awards of justice. In 1837, the rude structure made way for a brick edifice erected upon the public square. This in turn, was replaced in 1853, by our present Court House, at a cost of about $14,000.

The first teacher in the new village was our esteemed fellow citizen, Mr. John Howard, Postmaster, who taught the young idea how to shoot in a building near the present site of the Methodist Church.

Among the first circuit preachers in this community were the Reverend Charles Strider, and Reverend John Laney, both members of the Alabama Conference of the Methodist Episcopal Church, South.

The first jail was built in 1835, on the site of the present residence of Mr. H. S. Haynes. It was a two story house, strongly built of double layers of hewn logs, and in 1836, a rude picket was thrown around it to afford protection against the depredations of Indians. The new brick jail dates from 1842.

The first marriage in the County was that of J. H. Thornton to Miss Hudnall, which was celebrated near Jackson’s Bridge.