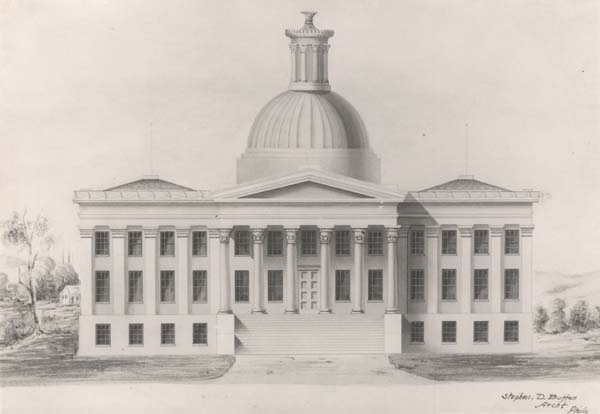 When Alabama’s Capital was moved to Montgomery. the building was designed by Architect Stephen Decatur Button of Philadelphia. The contractors were Bird F. Robinson and R. N. R. Bardwell. It was two stories over a raised basement and made of stuccoed brick. (2)“ A two story monumental portico with six Composite columns, topped by a broad pediment, was centered on the middle five bays of the front elevation. A central dome, 40 feet (12 m) in diameter, sat directly on a supporting ring at the main roof level behind the portico. The dome was crowned with an elaborate lantern patterned after the Choragic Monument of Lysicrates. (1) “The completed building was presented to the state on December 6, 1847, at the beginning of the legislature’s first-ever biennial session.”

Erected according to the Plans and under the superintendence of D. S. Button, Architect, assisted by the Building Committee,—R. R. Bardwell & Bird F. Robinson, Contractors.

The Foundation of this Edifice was commenced on the 9th day of June, 1846; the Corner Stone was laid by the Masonic Fraternity on the 4th day of July following. On the 1st day of November, 1847, the house was completed and the keys delivered up to the Building Committee. Dimensions of the house are as follows: The main building is 160 feet front by 70 feet deep, with a front and rear projection; the projection in front forms the Portico, which is 60 by 27 feet—the rear projection is 40 by 50 feet; the landing or Platform of Portico is 13 feet wide, 14 feet being thrown into the entrance Hall.

The entablature over the Portico is supported by six columns of the Grecian composite style of architecture, (the design is taken from Laferer’s Beauties of Modern Architecture;) the columns are 3 feet 8 inches diameter, and 29 feet high, the entablature is 10 feet 6 inches in depth; the pediment over the Portico rises 8 feet in the center; the crown moulding of the cornice is carried up the rake of the pediment and terminates over the centre of each outside column from which the tile ornaments are continued around the entire building the whole entablature (except the crown moulding) is continued around the whole house on each side of the Portico; in front the entablature is supported by 7 antees 3 feet 3 inches wide by 5 inches projection—also one antee behind each outside column—also 6 antees on each end and 10 on the rear.

By far the most interesting of all Montgomery prints is that one, “The Burning of the Capitol,” December 14, 1849.” This picture originated as a daguerreotype made by the photographer, A. G. Park, who apparently, in partnership with S. Swan, had it lithographed by Sarony and Major, that celebrated firm long furnishing prints to the American public. This view shows Market Street from the steps of the Court House, which then occupied the center of the space which we call our “Court Square,” Immediately in the forefront is to be seen four iron posts which are erected in the center of the street, and which protect the cap of a cistern under-ground, a water supply for the downtown business houses. Ox-carts, covered wagons, drays, mule teams, Negroes, planters, and limited number of shoppers on the street, are in view. The scene illustrates smoke emerging from the top of the Capitol building, which at that time had no super-structure in the nature of a dome. The Capitol stairways were circular and on the outside of the building which has an inset portico fronting west and above a basement story. This print is by far the rarest ever issued for any of the inland points in the Southern States. Mobile, New Orleans, and Savannah coast town pictures appeared quite early, and the English travelers, who passed through this section after the visit of Basil Hall, in 1827, left quite a few Alabama River Prints.

In 1846, the building was located on pasture land owned by Andrew Dexter, on a place called Goat Hill. This first capitol building burned on December 14, 1849, little more than two years after its completion. Only a few walls were left standing. Gov. Henry Collier had only recently been elected and his inauguration was set to take place three days later on December 17, 1849. He was forced to take the oath of office at the Montgomery Methodist Church.(3)

Burning of the Alabama State Capitol Building December 14, 1849 – This view illustrates Market Street, now Dexter Avenue, as it appeared
about midday of December 14, 1819 when the original Capitol erected in
Montgomery was destroyed by fire. The print is from a daguerreotype
which was made at the time of the conflagration, the artist making his
view from the steps of the Court House, then located at what is known
in Montgomery as the “square.” This sketch was later one of the earliest
of the Saroney lithographs. The original is a rare print.

“It was never definitively ascertained how the fire originated, some supposing it accidental and some thinking it the work of an incendiary. The flames were first discovered issuing from the roof of the Representative Hall, about 1:15 pm, and while both Houses were in session. The fire burned rapidly and in less than three hours the building was in ruins. Most of the archives were saved. The ruins were cleared by March 1850, with a new building soon to follow. (4)

Dexter Avenue with Alabama State Capitol building at the end

MARKET STREET, MONTGOMERY
A FEW MONTHS BEFORE ORGANIZATION OF THE CONFEDERACY
This view shows the Capitol in the distance from the artisan basin located at the present fountain in the center of the city. The building on the right is what was then known and was continued to be called for many years the Winter Building. On the second floor and facing the street was the Southern Telegraph office and it was from this building that the telegram was sent which permitted the firing on Fort Sumter. The building on the left, then known as the London and Liverpool and Globe Insurance Building, was occupied, downstairs by the Central Bank. This was the celebrated William Knox bank. This building was later occupied by Klein’s jewelry store. 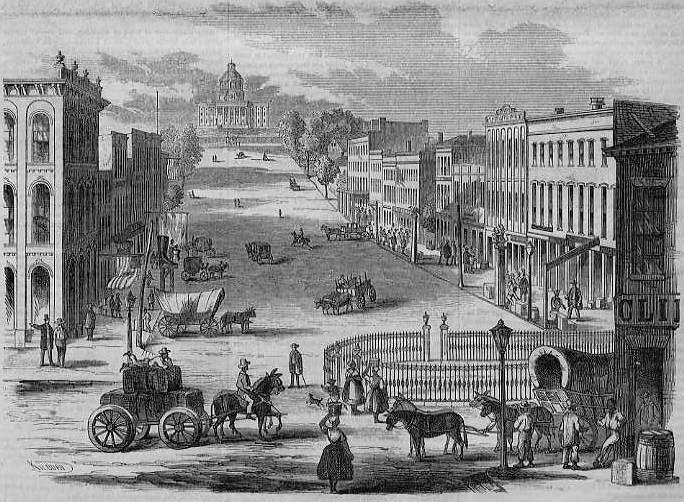 “The beautiful staircase was rebuilt by Horace King, a slave in 1849, three years after he had bought his freedom. He was asked to reconstruct the Alabama State Capital staircase after it had burned down. In addition to the framework, King constructed the double spiraling, making them appear to flat without support.”(5) 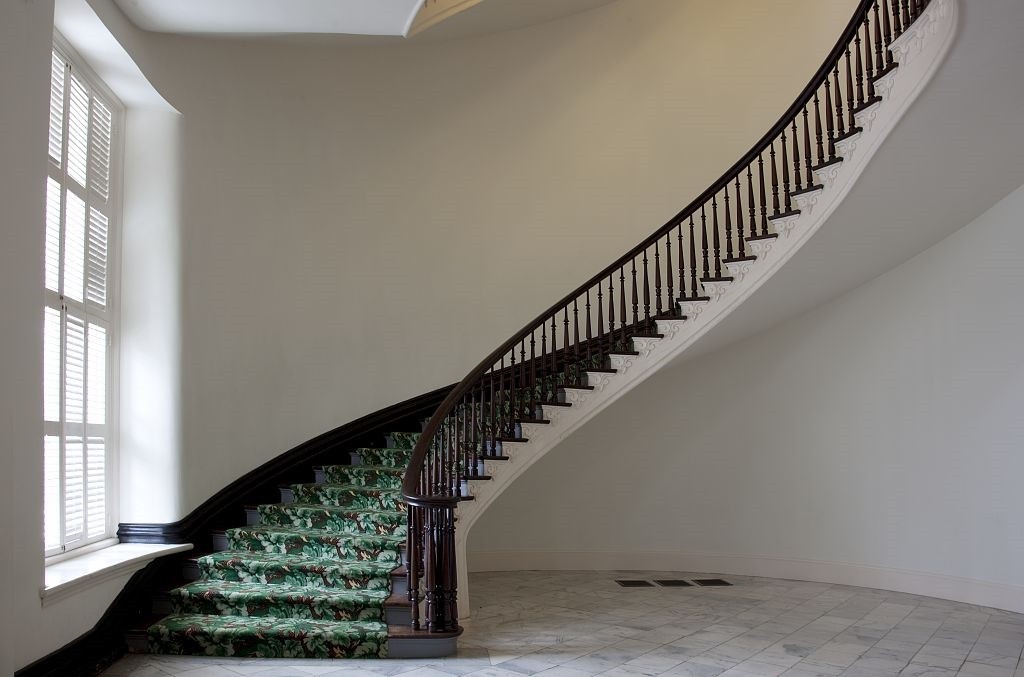 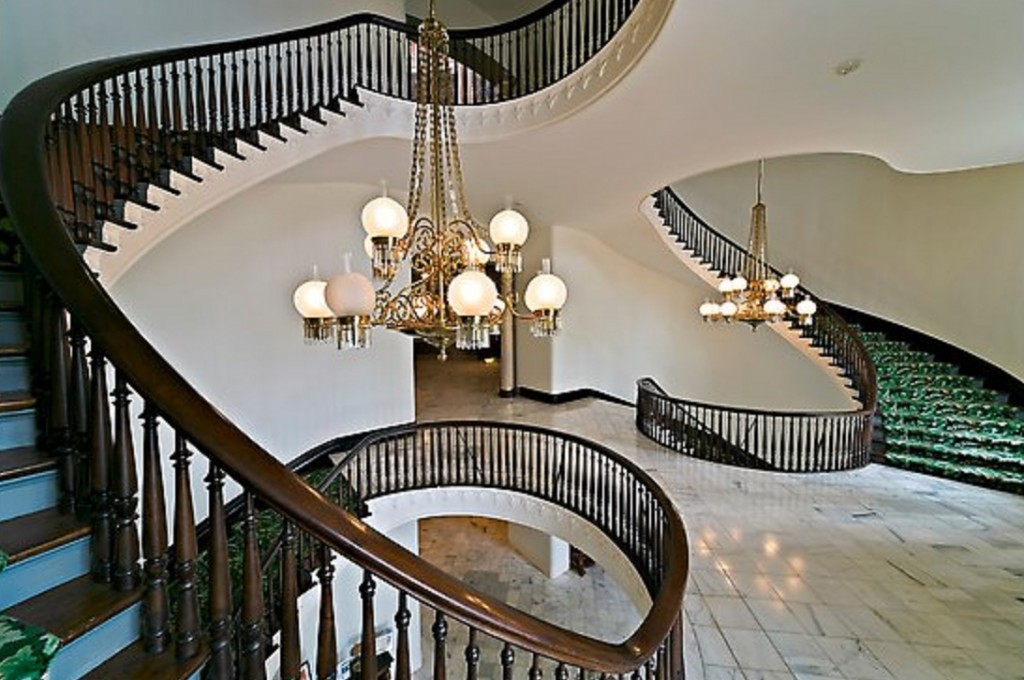 “Representative Benjamin H. Baker of Crawford in Russell County, and Senator James Abercrombie, a planter of the same county must be given credit for prompting a fight to have the State rebuild the Capitol building at public expense, and  Thomas H. Watts, then a member of the House from Butler, championed Montgomery’s claim for the new structure though there was a hard fight to carry the seat of government back to Tuscaloosa. Nicholas Davis of the House (of Limestone County), chairman of the Ways and Means Committee, adversed the Baker bill to have the State rebuild the Capitol, but A. H. Kendrick of Coosa, leader of the minority, fought Davis and with the aid of Senator Robert Ware of Montgomery they finally won again for this city. The “financial condition of the treasury” was at that time,  as it has on many other occasions, blamed for the unwillingness of the Davis Committee to have the State bear the expense of rebuilding.”(6) 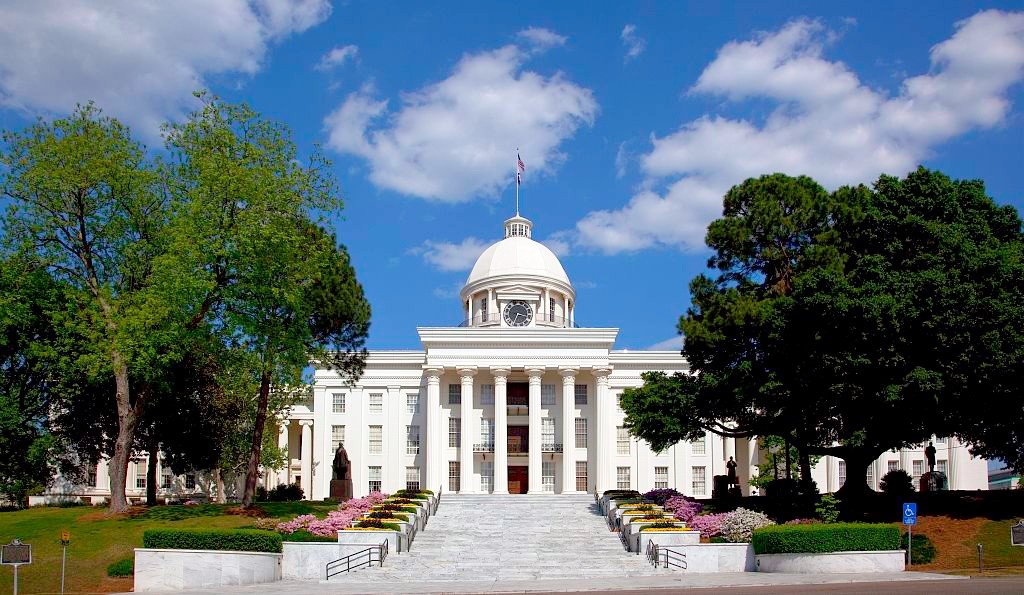 Today, the Alabama State Capitol is still located on Goat Hill at 600 Dexter Avenue in Montgomery and is now maintained and preserved by the Alabama Historical Commission. The building is open to the public Monday through Friday and is free to visit. Free guided tours can be arranged.

From the time of the discovery of America through the time of De Soto’s daring expedition, restless, resolute, and adventurous men crossed oceans in pursuit of their destiny.