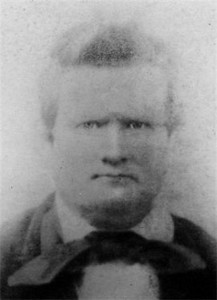 Benjamin Pinckney “Pink” Worthington was born in Hopkinsville, Kentucky on November 19, 1814 to Benjamin Worthington, Sr. and Judith (Stedman) Worthington of Christian County, Kentucky. He was a pioneer and a plantation owner with his land in present-day Birmingham. His 800-acre farm in what is now the Avondale/Lakeview area of Birmingham.

He married Caroline Mitchell of South Carolina in Jefferson County, Alabama on May 11, 1843. They had eleven children. Known children were:

The Worthington home was a large, eight room structure with high ceilings, a veranda, and six columns at the front. It was equipped with the first water system in the area supplied by springs later submerged under Rushton Park. A portion of land originally purchased by the Elyton Land Company was sometimes called “Pink Worthington’s frog pond”. The house was located where the intersection of 30th and 6th Avenue South meet in Birmingham.

After the Civil War B. P. Worthington intended to move his family to South America, but following a shipwreck off the coast of Cuba and a two-year sojourn in Florida he returned to Jefferson County and to his former home. His oldest daughter Betty married William Nabers and settled on the adjoining Nabers plantation and his daughter Alice married Zachariah Nabers, Jr.

In 1871 he was one of seven people who incorporated the National Bank of Birmingham with a paid-up capital of $50,000. He died on November 19, 1884, he died on his 70th birthday and is buried in Birmingham’s Oak Hill Cemetery.