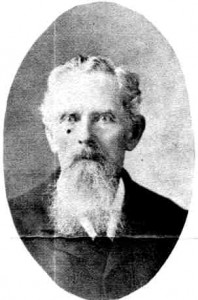 Nathaniel Brown Linder was a well-to-do planter of Oxford, Alabama. He was born at Spartanburg, S. C., on September 23, 1822. He descended from some of the oldest families of the Palmetto State. His paternal grandfather, John Linder, married Jane Wright, and one of their sons was Nathaniel Linder, the father of the subject of this sketch. Nathaniel Linder married Agnes Templeman, a daughter of Aaron Templeman. Both John Linder and Aaron Templeman were heroes of the American Revolution, and several other members of their families participated in the war for independence. Nathaniel and Agnes Linder had five children, Nathaniel B. being the only one living in 1904.

Soon after their marriage, they went to Warren County, Tenn., where they remained for about five years when they removed to eastern Tennessee, where they passed the remainder of their days. They were both members of the Methodist church. Nathaniel Linder was a teacher by profession and he was a prominent member of the Masonic order.

Nathaniel B. Linder was educated in the common schools of South Carolina and Tennessee, and, like his father, engaged in teaching for a number of years. In 1841 he came to Alabama, locating in Talladega County. At the age of seventeen years, he united with the Methodist Episcopal church, and he was active in church work, holding all the official positions in the congregation. For many years he was superintendent of the Sunday school.

He enlisted in October 1864 in the Confederacy and served in the Confederate army as a member of Company E, Tenth Alabama infantry. Nathaniel took part in the battle of Hatch’s Run and the siege of Savannah. His company was known as the “Jeff Davis Blues” He was discharged April 1854 at Richmond, Virginia.

Mr. Linder was married three times. His first wife, whom he married in 1843, was Rebecca Tarrant, of Jefferson County, Alabama. By this marriage, he had eight children: Frances Moody Linder, Amanda Josephine Linder, Benton Walton Linder, Parides Clemens Linder, Martha Rebecca Linder, Phoenix Leonidas Linder, Marcus Tarrant Linder and one that died in infancy. His first wife died in 1875 and he married Mary Ann Stewart, of Talladega County. Two children were born to this marriage: Leonidas Napoleon Linder and one that died in infancy. The death of his second wife occurred in 1884. His third wife was Addie Laura Hill, of Georgia. She was still living in 1904, but they had no children.

Whatever degree of success Mr. Linder has obtained has been through his industry and well-directed efforts. Starting in life a poor man, he accumulated a competence by his tireless energy and his frugal habits, and in his old age, he enjoyed the fruits of a well-spent life, surrounded by his family and a large circle of friends, all of whom delighted to do him honor. Nathaniel Brown Linder passed away November 21, 1908.