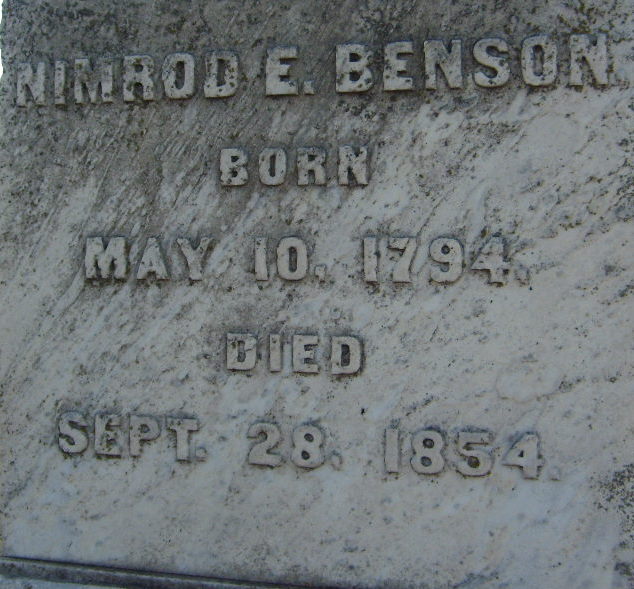 (Copyrighted Excerpt from The Grand Masters of Free & Accepted Masons of the State of Alabama 1811-2011 by Donna R. Causey)

NIMROD EARLE BENSON, one of the earliest white settlers of Montgomery, was born at Spartanburg, South Carolina, May 10, 1794. He was the son of WILLIAM HENRY BENSON (b. ca. 1743 -d. 1796) and ELEANOR (KEYS) BENSON (b. ca. 1753 -d 1815) of South Carolina. JUDGE BENSON was left an orphan at an early age and was brought up partly by an older brother. He was educated at Columbia College in South Carolina and was enrolled as an attorney in S.C. He soon acquired a high rank in his profession and was present around the period of the formation of Territorial Government in Montgomery, Alabama around 1819. i

NIMROD was the second lawyer that located in Montgomery and in 1821 and 1823, he was intendant of the town. In 1825, he represented the county of Montgomery in the legislature and was re-elected in 1826. NIMROD was elected judge of the county court in 1827 and held the office a short time. In 1846, he was mayor of Montgomery. He was appointed Receiver of Public Moneys in the land office of Montgomery when the last Creek cession was thrown on the market. NIMROD had just returned from Mobile where he had gone to make his periodic deposits in September 1854, when he sickened and died suddenly from yellow fever. Yellow fever was prevalent in both Mobile and Montgomery in 1854. He is buried at Oakwood Cemetery in Montgomery, Montgomery County, Alabama in Plot: Scott’s Free Burial.ii

A good man, friend of the poor

“While his body was in the parlor of his home, awaiting the time of interment, an Irishman, a stranger to all the family, walked in, and after a tearful gaze of the face, remarked, ” A good man, and a friend of the poor, is gone,” and retired. This was the tribute of a poor and “unknown stranger to the virtues of Judge Benson, more eloquent and truthful than is found on monuments, or in eulogistic biographies.” He was a prominent Freemason, and foremost on many good works and his character for integrity is irreproachable. He was elected Alabama’s Grand Master of the Freemasons in 1825, 1826, 1827.

“He was a Democrat of the old Jackson school but was so prudent and respectful where differences of opinion existed, that his personal and fraternal relations were strong and harmonious. He was the oldest Mason in Alabama at the time of his death, and had filled the office of Grand Master of the Grand Lodge in the infancy of the Order in the State, besides occupying honorable positions in the Grand Chapter.”iii

The following was written about NIMROD BENSON by historian, William Garrett in 1872:

“In estimating JUDGE BENSON, it would be enough to say that he was the legal patron of GOV. FITZPATRICK, JUDGE HENRY GOLDTHWAITE, GOV. GEORGE W. TOWNS, of Georgia, and SENATOR GEORGE GOLDTHWAITE, all of whom, if I have been correctly informed, studied law under his direction, and took from him their first lessons in legal knowledge.

For many years, indeed from the time I first knew him, he had abandoned the bar and had engaged in other pursuits more suited to his taste as he advanced in age. GOV. FITZPATRICK very properly nominated him as one of the Directors to take charge of the assets on the liquidation of the Branch Bank at Montgomery; and in all the public trusts which he held, I never heard a whisper of distrust of his ability and integrity.

Not a showy man

JUDGE BENSON was not, nor did he try to be, a showy man. His attainments were solid, and his character was based upon the principle of right and justice in his transactions with his fellow-men, and in the discharge of public trusts; and in the practical exhibition of these, he was equal to any gentleman I have known in the State. Alabama has had few such citizens, in all the attributes of an upright man, and a true Mason as NIMROD E. BENSON. He represented a class of men who have pretty much passed away leaving the savor of a good name and example for the men of this day.”iv

He married CATHERINE LOUISE GOLDTHWAITE, daughter of THOMAS and ANNE (WILSON) GOLDTHWAITE who lived at Woodbridge, England. They were married at the house of her brother, JOHN GOLDTHWAITE, in Montgomery, Alabama, where MRS. BENSON was then visiting. They had the following children:

This biography is from The Grand Masters of Free & Accepted Masons of the State of Alabama 1811-2011 by Donna R. Causey