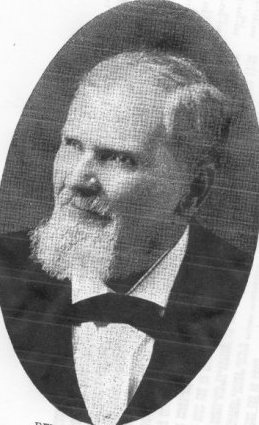 (The following sketch of the Rev. J. D. Anthony, author of “Cherokee County”, published in this issue of the Quarterly, was prepared by Hugh W. Cardon, of Birmingham, a portion of an address made by him to a group of ladies in Centre, Alabama, on the Cherokee Indians.)

Reverend Anthony wrote an autobiography which is titled, “Life and Times of Reverend J. D Anthony”, and was published in Atlanta in 1896. According to the autobiography, the subject was born in Abbeville County, South Carolina, on October 12, 1825, the son of Reverend Whitfield Anthony, a local Methodist Preacher who was also born in the Abbeville district on November 14, 1802.

Reverend J. D. Anthony’s mother was Lucinda Miller, who too was a native of Abbeville. The father of Reverend Whitfield Anthony was Joel Anthony who was the son of Captain John Anthony. John Anthony was a Captain in the Revolutionary Army from North Carolina and his son, Joel, served under his command during the War of Independence.

In November 1835, J. D. Anthony accompanied his father and family to the Cherokee nation and settled on the banks of the Coosa River in what is now Cherokee County, Alabama, approximately ten miles west of the Georgia line. Reverend Whitfield Anthony established the first white Methodist Church in what is now Cherokee County, Alabama, in the early part of 1836 and named the Church ‘Ebenezer’. This Church continues to exist and is now on the Centre circuit.

On July 4, 1839, J. D. Anthony lost the sight of his right eye caused by the explosion of a powder horn which contained a half pound of powder. His father and mother were away from home in the County Seat, which was located about five miles distance from their home, attending a fourth of July celebration when the accident happened. The County Seat at that time was called Jefferson, but later the name was changed to Cedar Bluff. The Anthony family moved from Cherokee County, Alabama, across the line into Floyd County, Georgia, in the autumn of 1843.

J. D. Anthony was licensed to preach by the Quarterly Conference of the Cassville and Rome Circuit held in Rome on October 24, 1846, and was admitted to the old Georgia Conference at Covington on December 20 of the same year.

His first circuit included twenty-six preaching places and was situated in the beautiful mountains of North Georgia. At the beginning of the War Between the States, Reverend Anthony was stationed on the Summerville Circuit in Chattooga County which joined DeKalb and Cherokee Counties in Alabama. In 1863, he was transferred to the Sandersville Circuit and through his intercession with General Sherman caused by a Masonic appeal, the town of Sandersville was spared from the torch. In 1869, Reverend Anthony was transferred to the Mobile Conference and was assigned to Elyton and Crumley’s Chapel.

The parsonage for this circuit was located at Village Falls, approximately twelve miles from Elyton and five miles from Crumley’s Chapel. In November 1870, he participated in the organization of the North Alabama Conference of the Methodist Episcopal Church South at Gadsden. This organizational conference was presided over by two of the great men of Methodist History, Bishops Payne and McTyeire. At the close of the Conference, Reverend Anthony was appointed presiding Elder of the Tuscaloosa District.The territory of the Tuscaloosa district reached from the west line of Jefferson County to the Mississippi line and from the southern boundary of the convention to the dividing lines of Walker, Fayette, and Marion Counties. While holding this pastorate, Brother Anthony witnessed the founding of Birmingham.

In the summer of 1873, Brother Anthony was invited to address the people of Birmingham on “The Evils of Intemperance”. On arriving into the Magic City he found that the people here were dying at a rapid rate from an epidemic of Asiatic cholera. In the space of five hours, he witnessed seventeen funerals and the morning after his arrival, he was stricken with the disease but managed to recover without the aid of any medical assistance, although his death was reported and his obituaries were written in several of the papers in the Tuscaloosa District. At the annual conference held in Talladega in 1873, Reverend Anthony was appointed Presiding Elder of the Birmingham District and in 1875 was appointed to the Gadsden station. At the close of the Conference year, he elected to return to the South Georgia Conference and spent the remainder of his life as a member of that Conference serving not only in the larger stations, but as Presiding Elder. J. D. Anthony was the father of Reverend Bascom Anthony who too became one of the outstanding men of Georgia Methodism.

Alabama Historical Quarterly, Vol 8, No 3, Fall 1946 – Published by the Alabama Department of Archives and History – 1946