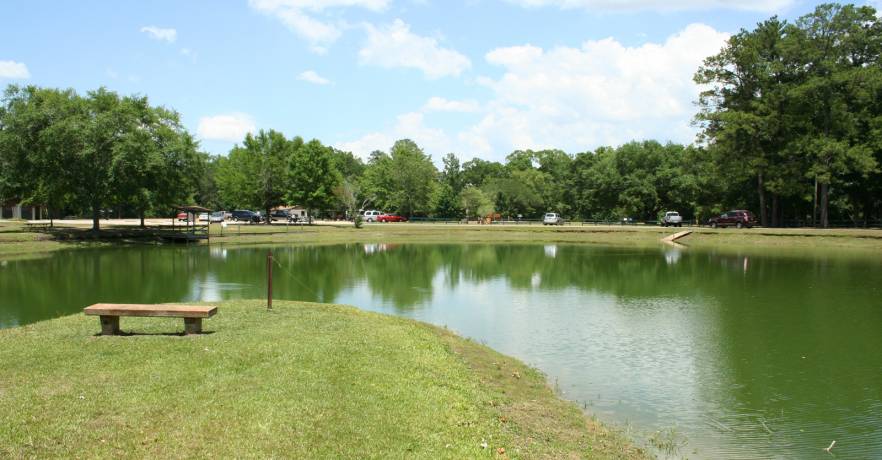 The spring at Blue Springs State Park actually moved by itself to two other locations before finally settling in at the current location. Some oldtimers remembered that the spring first appeared north of the highway approximately 300 yards from its present site.

But suddenly the spring dried up and reappeared just south of the highway at the west end of the Choctawhatchee river bridge. The spring was then improved and made into a swimming pool.

The Hotel drew crowds of visitors

Blue Springs in Barbour County, Alabama has always been famous for its great natural spring and pool, which drew great crowds of visitors to the Blue Springs hotel and cottages, seeking the pleasures of a watering place and the benefits of the curative powers of its water.

The pool is about 35 feet deep and into his pool flows a cold stream of water that spouts up and continually flows into this stream that empties into the Choctawhatchee River. 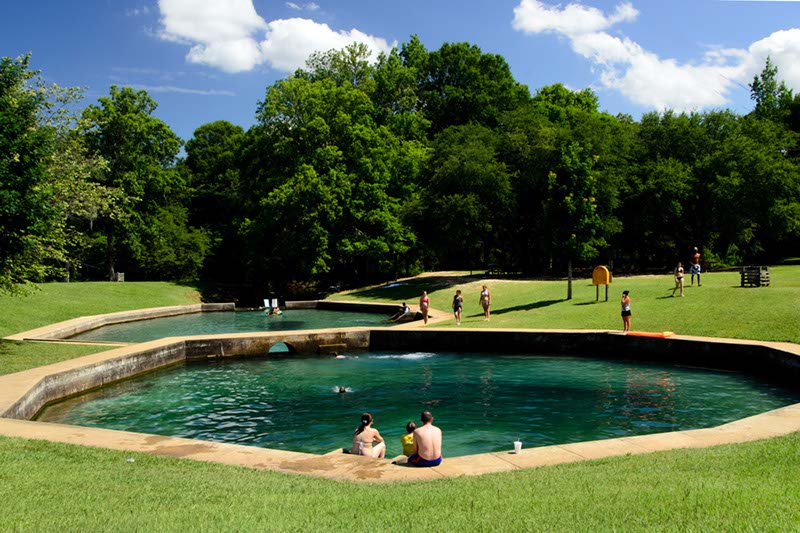 In 1890, Mr. Harrison built a small hotel and the population grew to almost two dozen families. In the early days, men and women were not permitted to bathe together in the pool.

The women’s bathing garments were long-sleeved all-over bathing suits with long black cotton stockings and bathing shoes. They went to the pool but would not enter the water as long as a man was within sight. “After they splashed around awhile in the sixty-seven-degree water, they all came out together and returned to the hotel, then the men went to the pool.

Some strange occurred in the old lime sink

Mr. Whigham built the Blue Springs Hotel in 1900. He added additional rooms two years later to increase the number of rooms to twenty-eight and built a modern bathhouse and a dance hall. Frank O. Deese of Ozark, Alabama, managed the hotel during the summer of 1901. 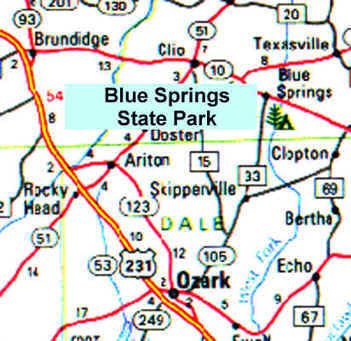 Other managers were Hill Pearce of Clayton, Mrs. A. J. Locke of Eufaula, D. B. Easterling, Lawson Whigham of Headland, Mr. Renfroe of Ariton, J. A. McRae of Louisville and Mrs. Milligan. His hotel was a popular retreat during the summer months. A room and three meals a day cost $1.00.

“Fried chicken was served every day, and the bow-and-pitcher hotel was full from June first until the middle of September. Because of the limited number of rooms in the hotel, families began pitching tents near the pool. At times, there were fifteen to twenty tents set up under the shade trees. A few families built small cottages there.

In 1913, Mr. Whigham installed concrete around the sides of the pool, and opened a small pool for children. The large pool remained in operation until about 1938. The hotel was closed in 1924.

It was a popular place to hold speaking engagements for politicians

Around Blue Springs, resided some of the most prominent politicians of the County. During campaigns, it was a popular place to hold the speakings and candidates were always sure of getting together more listeners at Blue Springs than most any other place in the County.

Many barbecues and picnics were held there with many of the distinguished politicians and speakers in the 188’s and 1890’s. At a largely attended Convention, Henry W. Hilliard once said, “Alabama is divided into three parts, North Alabama, South Alabama and Barbour County. The 4th of July each year was known in the area at “Blue Springs Day.” Many family squabbles took place there on the 4th of July.

For many years, Confederate soldiers from all parts of the South, held reunions at Blue Springs in the month of July. “The people of the community furnished lunch to those who attended. Also during July the horse traders in the area annually held three-day meetings to trade horses and enjoy the Blue Springs hospitality. Often the crowd at Blue Springs for a single day was estimated at one thousand.” 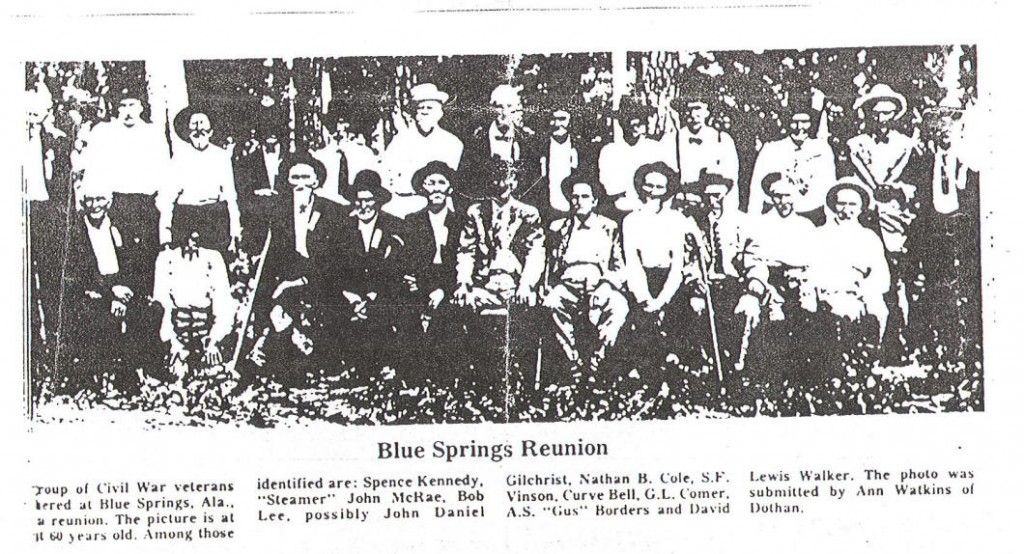 An old cemetery is in the area

Philip Johnston was a resident of Blue Springs who had lived in the County since 1822. He attended the first Court held in the County and was a member of the first grand jury. He married early in life and became the father of ten children. His wife died and he remained a widower for 15 years. At the age of 60, he married a young woman of 22 to whom was born 9 children. He lived into the 1930’s.

Spring Hill is an old cemetery in the area.

A historic marker is located east of Blue Springs on Bethel Road .8 mile south of Highway 10 that states the following:

The  Blue Springs School was first established in 1920 on land donated by Henry H. Sheppard. The lumber for the school was donated by citizens of the community and prepared at A. S. Knight’s sawmill. 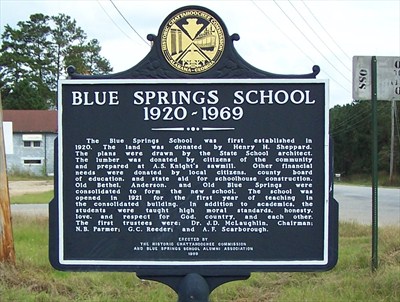 The schools, Old Bethel, Anderson and old Blue Springs were consolidated to form the new school which opened in 1921. The first trustees were Dr. J. D. McLaughlin, Chairman; N. B. Parmer; G. C. Reeder and A. F. Scarborough.

On May 23, 2013  Nerine the Arctic Mermaid and Mermaid Adella went for a swim at Blue Springs Alabama State Park.

– In this action packed novel depicting true events the family saga continues with Ambrose Dixon’s family. George Willson witnesses the execution of King Charles II and is forced to leave the woman he loves to witch hunters in 17th century England as he flees to his sister, Mary, and her husband Ambrose Dixons home in Colonial American. Ridden with guilt over difficult decisions he made to survive, George Willson and the Dixon’s embrace the Quaker faith which further creates problems for their existence in the New World.