If you are ever invited to a real country noontime dinner in the South, jump at the chance to see what the fuss about soul food is all about. What could be the value of two days extensive labor in addition to the growing and harvesting procedures of the hosts? 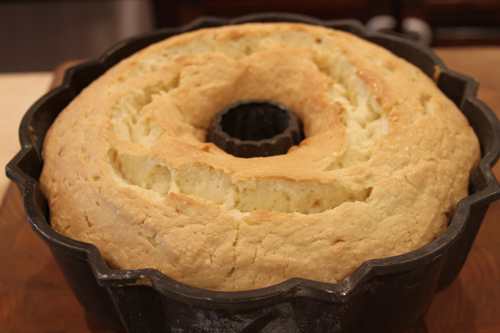 The day before guests arrive, like the preacher’s family or other important company, the cook bakes a 12 egg pound cake, makes 36 fried dried apple pies, and two cobblers, blackberry or peach according to the season.

Then garden bounty is collected.  A peck of peas and one of okra, a half dozen medium sized squash, and an apron full of string beans are harvested, washed and put in a cool place for the next day’s preparation.

Another peck of roasting ears is put aside until needed.  Fresh onions and potatoes are dug and placed in a basket on the shady back porch.  Sprigs of dill, parsley, and some of mint are washed and saved in jars until needed to garnish prepared dishes.

Very early the day of the event, the cook rises to prepare the meal. She shells and washes the peas, puts them in the water where slices of bacon have been boiling and turns the heat down to simmer. Okra must be cut, covered with corn meal and fried. Squash is sautéed with onion, then given enough water to tenderize.  The green beans have to have the strings removed and snapped. It also is simmered with bacon to give it the distinctive soul food flavor. 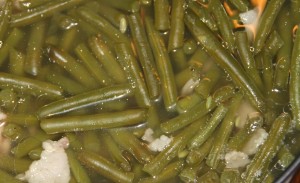 Part of the fresh corn will be boiled on the cob, so all that is needed is shucking, checking for insects, and removing corn silks before dropping into boiling water, minutes before serving. The rest of the corn is cut in tiny layers, then scraped to get every drop of the starchy liquid, then poured into a skillet sizzling with the bacon fat left from breakfast. Fresh red potatoes are quartered, dropped with skin on into salt water and boiled until tender. They will be served with the string beans and garnished with parsley.

Sliced tomatoes, green onions, and cucumbers are gathered, washed, and placed in cut glass bowls. The tea is strained from its tea pot and diluted with water and separated into pitchers, one straight and another sweetened generously with sugar. 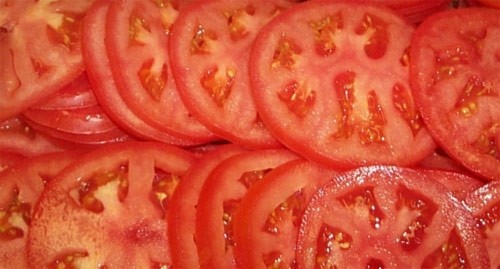 Corn meal measured from the large bin where it has been stored since it came from the grist meal, is measured into a large bowl, mixed with a couple of eggs and an equal amount of freshly churned buttermilk and poured into another sizzling skillet of bacon fat and cooked in the hottest part of the oven. Then pan of yeast rolls rising since breakfast wait to pop into the oven after the cornbread is removed. 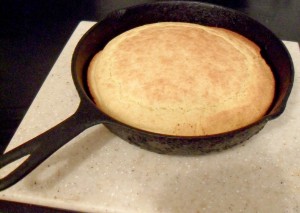 The fried chicken came from two young fryers, chased by younger members of the family and dispatched with a quick stroke of the ax, picked, gutted, and cut up. They were fried with a coating of buttermilk and flour and set aside until gravy could be stirred up in the resulting fat and crispy bits left in the pan. 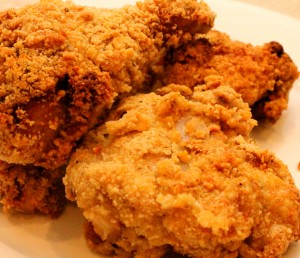 When guests arrive, the adults are ushered into the dining room around the 12 foot long table. The children wait impatiently, hoping a drumstick will be left when their turn comes.  That is the way I remember dinner at Granny’s house.

Now I call a half dozen friends about 3 hours before the evening meal, ask them what they would like to prepare for a covered dish supper, open a refrigerated spiral sliced ham, pop open and toss a bag of green salad, and stick a package  of Sunbeam rolls in the oven. Put a couple of bags of preseasoned frozen vegetables in the microwave, and open a jug of Milo’s artificially sweetened tea. Put out paper plates and napkins, plastic cutlery and cups on a plastic tablecloth, pull out a chair, and relax.

Vinegar of the Four Thieves is a recipe that has been known for its antibacterial, antiviral, antiseptic and antifungal properties for years. It was even used to cure the Bubonic Plague. See Thomas Jefferson’s recipe in  the book VINEGAR OF THE FOUR THIEVES: Recipes & curious tips from the past

Vinegar of the Four Thieves