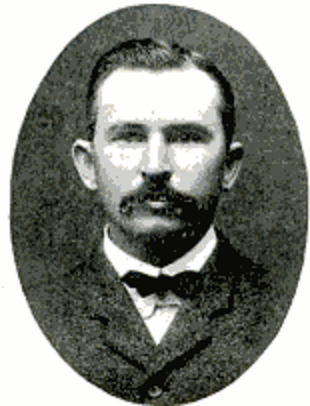 Jesse Elbert Robbins of Ensley, Jefferson County, Alabama practiced medicine in Alabama nearly twenty years and is regarded as one of the substantial and successful members of his profession.

His grandparents, Michael and Elizabeth (Boyd) Robbins, were natives of the Pendleton district of South Carolina but removed to Alabama about 1825 and located in Jefferson county. Their son, Ephraim N. Robbins, was born after their arrival in this State, became a farmer and ended his days at the old homestead. He married Emily F., a daughter of James Nail, of Jefferson county, the latter a son of a soldier of the War of 1812. Her ancestry were among the first settlers of Jefferson county, Alabama and mostly farmers by occupation.

Jesse Elbert Robbins, son of Ephraim N. and Emily (Nail) Robbins, was born at Robbins Cross Roads, in Jefferson county, Ala., Dec. 18, 1862. He was brought up on the farm and attended the high school at Jasper and the Ruhama academy at East Lake. He taught school a year, began the study of medicine, and entered the Southern Medical college at Atlanta in 1884, graduating in March two years later. He practiced two years at his old home, but moved from there to Brookside in 1888, and spent the ensuing thirteen years at that place, holding the position of physician and surgeon for the Sloss Iron and Steel company.

In April, 1902, he removed to Ensley, where he had a general practice and held a position on the staff of the Cunningham hospital. He served several years as beat committeeman for his district, township school trustee, member of the school board of Brookside district, on the alderman board of the town of Brookside for three terms, and also as a member of the Ensley board of education.

Dr. Robbins passed away at the age of 69 and is buried in Forest Hill Cemetery in Birmingham, Jefferson County, Alabama