How many times in conversation with strangers or friends do I say, “Originally I’m from Tuscaloosa?” Many times this leads to, “Do you know so and so who use to live in Tuscaloosa?” Then, again you might connect with that someone you know and you have a delightful conversation going.

I was born in Druid City Hospital in the middle of the Great Depression, 1935. The Hospital was located on University Avenue in Tuscaloosa. Mother and I came home in a Mathis and Jones’ ambulance the next day to our rented house located at 820 4th Avenue. The house was located behind the present Baptist Student Union Chapel on University Boulevard.

Later, we moved a block away to 319 9th Street in rented duplex house. Now, this is University of Alabama property. Mother’s sister and her husband lived in the other half of the duplex. Both families shared the same bathroom with the porcelain claw tub. In the winter there was no heat in the house except fireplaces and no air conditioning for summer heat. Coal was brought in to the house in a scuttle and Mother started the fire using kindling underneath the coal in the iron grate in the fireplace. The fired was stirred with an iron poker. 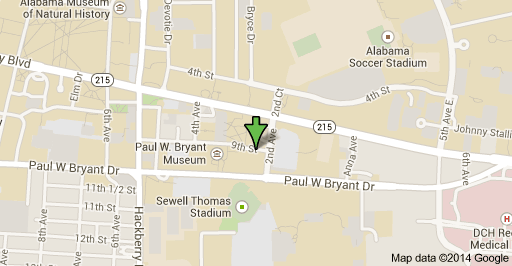 I remember my Mom and baby brother coming home in May of 1939 in an ambulance. In those days, because of inactivity (staying in bed many days) many of the mothers developed blood clots in their legs commonly called, “ Milk Leg”.

Many years later in the late ’50 I would live in a part of the Druid City Hospital that was converted into dorm rooms for the University of Alabama. Working part time as a campus nurse while attending school, I hung my laundry in the delivery room where I was born. Later Druid City Hospital was torn down and the facility used Northington Campus (where the University Mall is located now) as the hospital until the new hospital was built on University Boulevard. 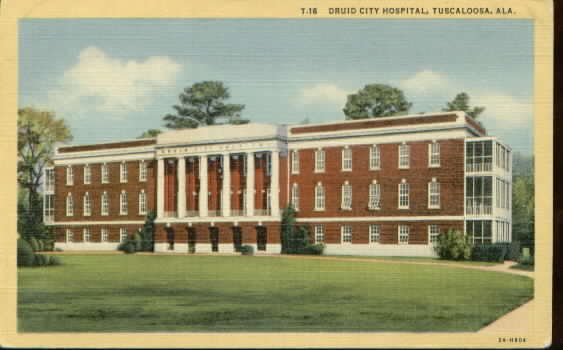 Many childhood illnesses occurred among our age group during the ‘30’s and ‘40’s.

There were no vaccines available. Dr. Ruby Tyler was my pediatrician. This was very unusual for a woman during this time. Many years later I met her grandson, Dr. Eric Tyler at Children’s Hospital where he was a Pediatric Resident.

My brother was born in 1939. He contracted typhoid fever when he was a baby and almost died. He was admitted to the Druid City Hospital. For treatment he received clysis (glucose administered by needles) in his thighs. There was no procedure for starting an IV on a baby, so the glucose was given into the tissue and absorbed.  He was very sick. It was not determined how he contacted the disease. The only thing we could think of was drinking un-pasteurized milk. Mother kept a cow near Paul Bryant, Jr. Drive and milked the cow every morning and this was our milk supply. I will always wonder why I hadn’t contacted the disease if the milk was the source?

As a young child I had measles, whooping cough and chickenpox. These childhood diseases are now preventable with the administration of vaccines. I remember coughing so hard with whooping cough that I was bent over double standing in the front yard.

You don’t see this anymore but many newspapers would print cute baby sayings. The Age Herald had a column called, “Baby Mine. This was a contest for the cutest and original baby sayings. Mother entered the contest with one of my baby saying. I was going back and forth to the window lifting up the shade. When asked what I was doing? I replied, “The clouds are winking at me.” This won me $1.00 and my daddy put it in a saving account for me in the First National Bank of Tuscaloosa. 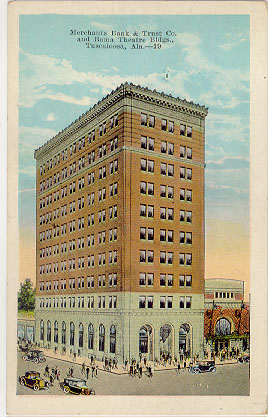 Mother kept a baby book for me and recorded many things that happened to me as a baby. I also have the two pair of soft baby shoes she saved in the box for me which I treasurer. Now they are antiques!

Accidents do happen. I fell off mother’s bed at age 4 and broke my collarbone. Another accident occurred when my family was on a car outing to see my grandparents. I though I was going to open and close the car door but instead the door opened and I fell out of the moving car on Greensboro Road! 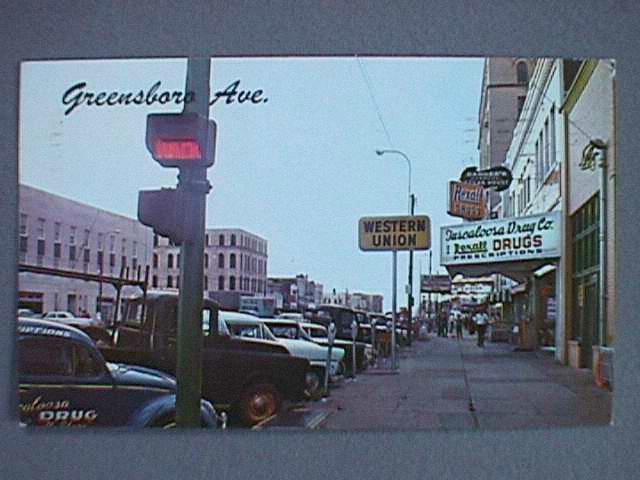 Immediately I picked myself up and started running toward the car because I thought they were leaving me. I wasn’t hurt, only cuts and bruises. Of course, this scared my parents out of their minds! Why hadn’t childproof locks on back car door been invented?

The railroad tracks were located about four blocks from our house parallel to Paul Bryant, Jr. Drive and many times during those depression years mother would hear a knock on the back door and a man, (a hobo) would be standing there and he would ask for food. My mother would have him sit on the back steps and she would fix him a plate of food and a drink. My mother had a kind heart.

I entered school at the age of almost seven since my birthday was in November. Mother was a good seamstress and made my dresses for school. Little girls did not wear long pants to school!  On the first day of school Mother walked me to the Verner Elementary School located on Paul Bryant Avenue across the street from Denny stadium, now called  Bryant – Denny stadium. I was only there for four months until we moved in 1942 to Childersburg for dad to work in the TNT plant located there. The WWII years followed.

I also continue to say, “Originally I’m from Tuscaloosa!”