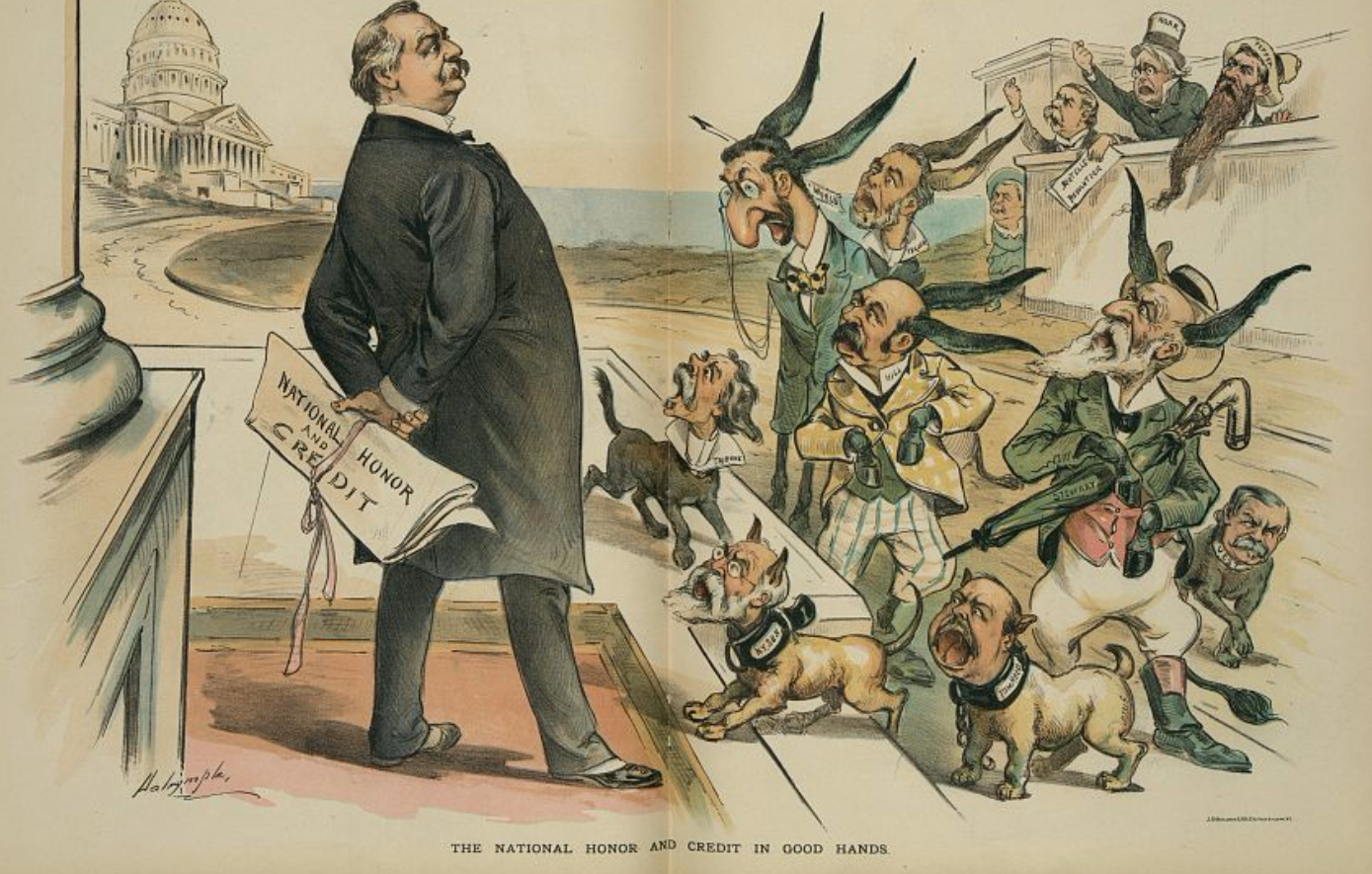 In a 1894 speech Hon. Jos. Wheeler of Alabama cited statistics when and why our National Debt began.

Very instructive indeed are the figures showing the cost of Federal, State, county and municipal government grouped together by Representative Joseph Wheeler, of Alabama, in his recent speech. They show a progressive tendency toward larger public expenditures out of all proportion to the growth of population. 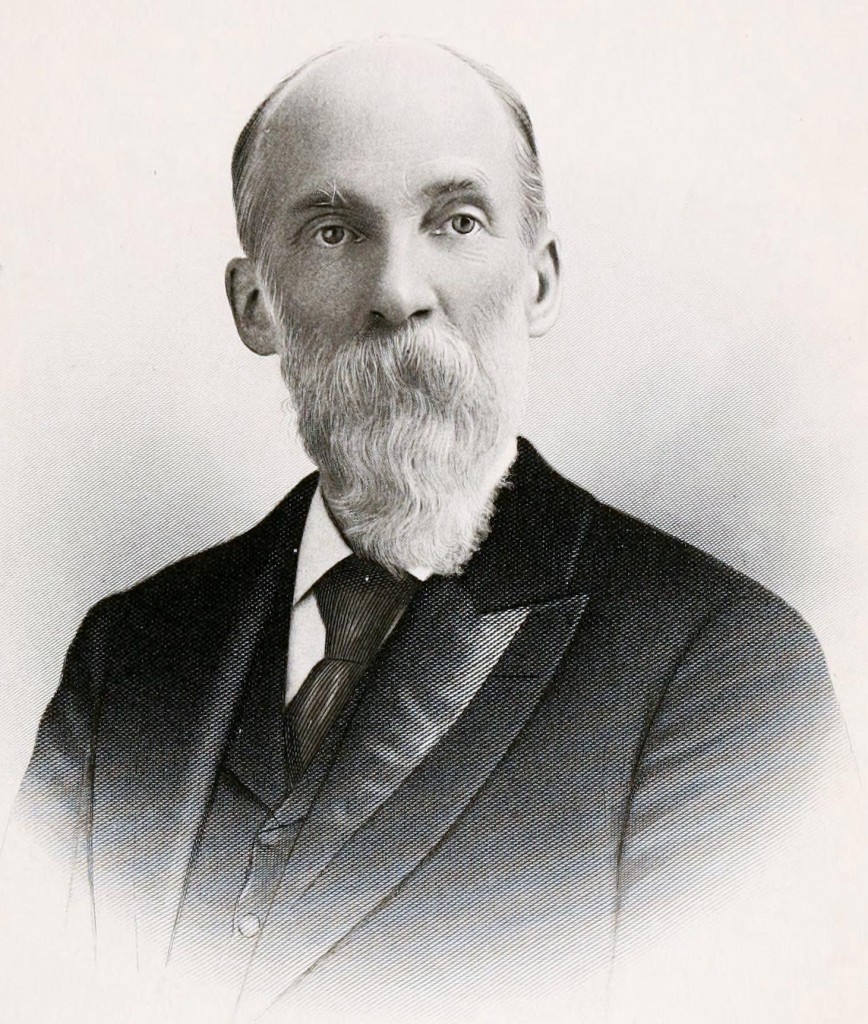 Democratic principle to keep out of debt

During the period of seventy-one years, from the beginning of the federal government to 1861, the average national yearly expenditures amounted to $38,625,351. That long period was dominated by the Democratic party, and even in the brief intervals of Federal and later of Whig ascendancy the Democratic tradition of economy maintained its hold. To limit appropriations to actual necessities, keep out of debt and pay off debt as quickly as possible, and raise no more revenues than were clearly called for, were the guiding principles of all parties, and especially so of the Democratic party.

It makes droll reading now to turn to the platform of the convention that nominated Abraham Lincoln, and recall his declaration: That the people justly view with alarm the reckless extravagance which pervades every department of the federal government: that a return to rigid economy and accountability is indispensable to arrest the systematic plunder of the public treasury by favored partisans.” The total expenditures of the government under President Buchanan for the year preceding the adoption of that high-flown protest against extravagance amounted to a little over $63,000,000. For the last year of President Harrison’s term they amounted to $383,477,954, or more than six times as much. They were never higher, except for the first year of the civil war period, when they amounted to $520,809,416. 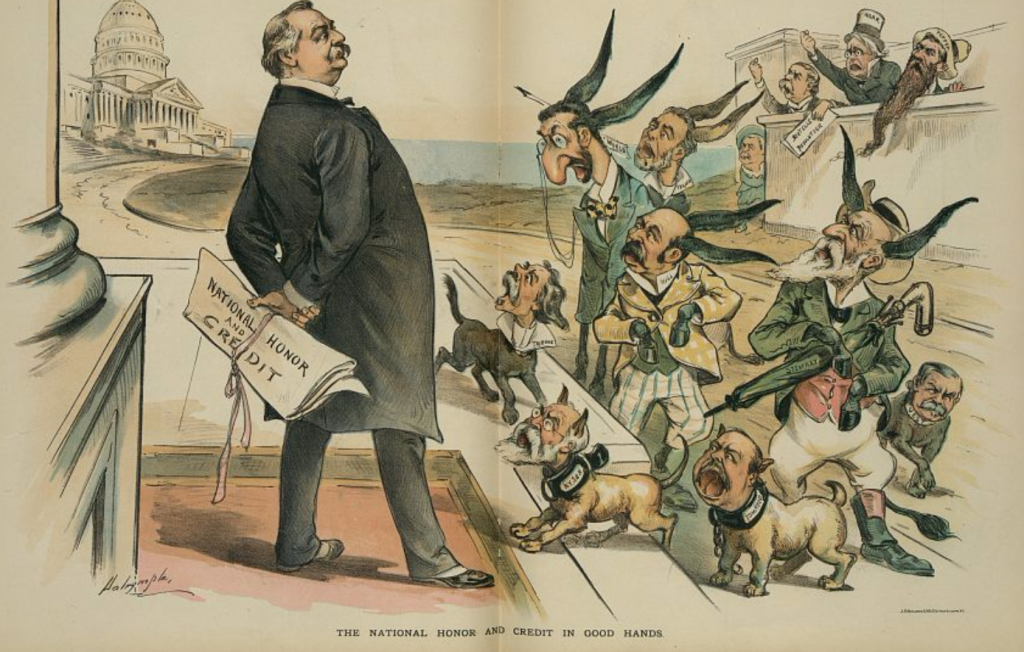 The cost of the four years’ civil war accounts legitimately, no doubt, for a considerable part of this vast increase of expenditure, but by no means for all of it. The war was ended nearly thirty years ago, and yet the expenditures of every war year save the first were equaled or exceeded during every year of President Harrison’s administration.

The impetus to extravagance which the war gave to the general government has been communicated to State, county and city governments. The census of 1890 shows a startling burden of local expenditure and taxation. The State and territorial governments, and the county, city and town governments, spent altogether in that year $569,252,634. So that the total cost of their governments, national and local, to the American people for the year 1890 was almost a round billion of dollars. And thus was the crowning record of thirty years of almost unchecked control by a party which commenced its career in 1860 by denouncing the “reckless extravagance” of a party whose national expenditures touched high-water mark at $63,000,000 a year.

There can be no doubt that one of the great contributing causes to this distressful condition of the country for several years past, as manifested by business depressions and failures and the chronic outbreaks of discontented labor, has been that all our governments have been costing too much. The people have been educated under republican rule to forget the old-fashioned precepts of frugality and thrift which their fathers followed so rigidly and with such thrifty results. They have come to look upon their governments as if they were somehow endowed with a miraculous faculty of spending money without either, at first or at last, drawing every dollar of it, with interest, out of their own pockets. The maxim, “pay as you go,” which was held in the highest respect from the days of Washington to those of Buchanan, has been treated as obsolete. Cities have not stopped to count the cost, but have plunged into all kinds of expensive enterprises on the thirty-years bonded loan basis.

Especially is this true of Northern municipalities, whose annual expenditures, largely to meet interest payments on large loans lightly contracted to construct costly parks and other public works, are crushingly heavy. The cities of New York State of over 50,000 inhabitants spend $50,000,000 a year. The State, county and city expenditures of New York aggregated over $91,000,000 in 1890 – nearly $30,000,000 more than the total national expenditures in 1860. The half dozen cities of Massachusetts with over 50,000 population apiece are spending every year about $17,000,000 among them. It requires a tax levy of about $47,000,000 a year to pay for the State, county and municipal governments of the Bay State.

Living beyond our means too long

The “flush times” of the war left their indelible imprint in every Northern State in and impulse to large public expenditure that remains to this day. In the Southern States and in all the States where the Democratic traditions of economy have been preserved the expenditures are much more modest. Maryland’s State, county, city and town expenditures for 1890 were a little over $10,000,000. Massachusetts spent nearly five times as much and so did Pennsylvania. Ohio State and local expenditures are over $40,000,000 a year. Democratic Indiana spends only $18,000,000 a year, and a Democratic Texas only $12,500,000. Virginia spends State, county and municipal purposes less than $8,000,000 a year, while Michigan spends twice as much and so does New Jersey.

As a nation, as States and as cities and towns, we have been living beyond our means. The war pace was fast, and we have kept it up too long.

Save time and avoid pitfalls in your research.WHERE DO I START? Hints and Tips for Beginning Genealogists with On-line resources is filled with simple, no-nonsense instructions to set you on the path of your families’ ancestry with the following information: