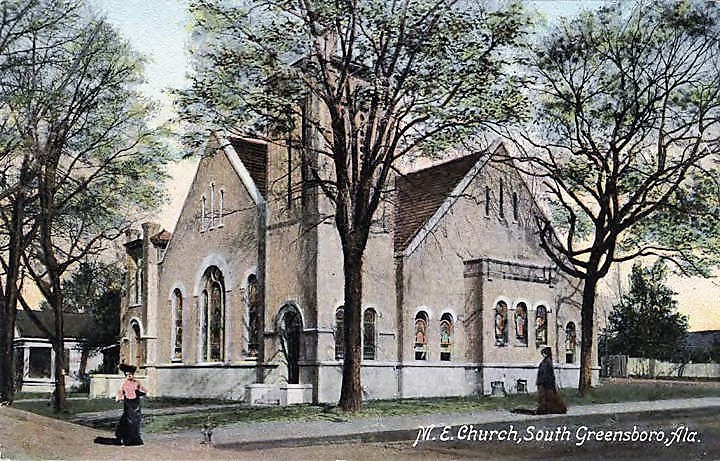 History of the Methodist Episcopal Church, South, of Greensboro.1

The earliest records of this church were lost, and have never been in the possession of the present generation, nor that of the one this generation succeeds. This fact is borne out by the following statement taken from the minutes of the Quarterly Conference held on the 25th of April, 1835:

“A. B. Sawyer, John DuBois and S. G. Field were appointed a committee to Search for and arrange the records of the church, and have them recorded.” Evidently, these gentlemen failed to find the records, for there is no further mention of the matter in any of the succeeding minutes kept by the church officials. However, it is known that as early as the year 1822 there was a Methodist church in Greensboro. It stood where the negro Methodists now have their brick church in the rear of the Dr. Ward homestead. One among the first Methodist ministers to preach in Greensboro was the Rev. Mr. Hawkins.

Sometime between the years 1822 and 1833, Greensboro was made a station. The records from which this history is compiled begin with the latter year, and at that time Rev. Mr. Hearn was presiding elder of the Greensboro district, and Rev. Robert L. Kenon was preacher in charge at this place. The stewards were: Robert Dickens and Franklin Shaw. The Revs. Hearn and Kenon were succeeded in 1835 by Rev. E. V. LeVert, presiding elder, and Rev. S. B. Sawyer, preacher in charge.

At a meeting of the Quarterly Conference held March 11th, 1837, a committee, composed of Robert Dickens, Thomas Johnston, and Andrew Walker, was appointed to take under consideration the necessity and expediency of building a parsonage for the station. At the next meeting of the Quarterly Conference, held June 10th, 1837, this committee reported, and recommended that a parsonage be purchased as soon as possible, and asked the Conference to allow them to open a subscription for the purpose—subscriptions to be made payable the following January.

The report was received, and the committee was urged to press the matter, but pending the purchase of a suitable building, Dr. William Jones offered the church the use of a house that stood just west of the present Madison Jones lot, which offer was accepted, and for some years the Methodist ministers resided there. The house was torn down ten or a dozen years ago.

Finally the Methodists decided to own their parsonage, and purchased the (then) Randolph lot,—the same now owned and occupied by Thomas Johnson—and this was used as a parsonage until the year 1866, when it was sold, and with the proceeds the lot upon which the present parsonage stands was purchased, and again for nine years the Methodists were without a home for the preacher, for it was not until 1875 that the present parsonage was erected. But really no home for the minister was needed, for the church was supplied, with one or two exceptions, for nearly twenty years, with a professor from the Southern University, by the annual conferences. But in 1886 this method was changed, and a preacher was sent who was to devote his entire time to the charge. 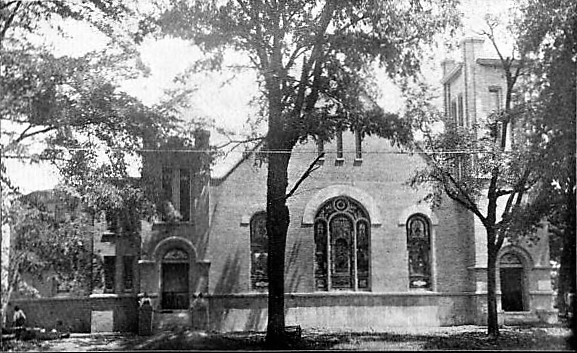 Building a church in Greensboro

At the meeting of the Quarterly Conference in June, 1837, Thomas M. Johnston and Joel Reynolds were appointed stewards, in place of Greene B. Williams, deceased, and Stephen G. Field, removed. At this same meeting (June 10, 1837) the stewards were appointed a building committee to “build a new Methodist church in the town of Greensboro, Alabama,” “and it is recommended,” said the conference, “that the house be built at once.”

It was decided to remove from the place where the church had been located for some years, and the old lot and edifice standing thereon were disposed of to the negroes, and in 1837 the lot at the intersection of Main and Tuscaloosa streets (where the church now stands) was purchased from Matthew Hobson for the sum of $1,000.00.

The work on the new building was pushed quite rapidly for those days when the brick had to be made and burned at home, and the timber had to be gotten out by hand—for in a little more than a year after the appointment of a committee to superintend the building the church was dedicated—April 3, 1840. Rev. E. V. LeVert preached the sermon, his text being: “This is a faithful saying, and worthy of all acceptation, that Christ Jesus came into the world to save sinners.” At the time of the dedication, the church had a membership of one hundred and sixteen whites; the Sunday School had two superintendents, nine teachers, and sixty pupils.

Church matters seem not to have prospered with the Methodists in a financial way during the next few succeeding years, if the following from the minutes of the Quarterly Conference, held February 2, 1846, is to be taken as an indication:

“In view of the indebtedness of this Station, be it Resolved, That it be returned to the Circuit; Provided, That first the matter be brought before the whole Society on next Sabbath, and that if they will come forward and pay all arrearages and promise to sustain the Station, it shall remain as such.”

On the following Sunday, the matter was brought before the congregation, and the alternative of either returning to the Circuit or paying up arrearages was submitted to them, and they chose to liquidate the indebtedness and remain as a Station.

The building that was torn away in June 1907, to make room for the present handsome and commodious structure, was practically the same as the one erected 1839–40.

For several years the question of building a new church was discussed by the membership, and finally, the matter was definitely decided by its being ascertained that the roof of the old building was in a dangerous condition, and was liable to fall in. Nothing was left for the Methodists to do but to either repair the old structure at great cost, or to build a new one, and at a meeting of the Quarterly Conference held on January 29, 1907, it was decided to build a new church, and the following building committee was appointed: Dr. S. M. Hosmer, chairman, F. D. Gulley, R. F. Monette, Wm. E. W. Yerby, Thomas Johnson, Thomas E. Knight, L. J. Lawson, W. C. Christian and E. A. Powers.

The contract was let to John A. Straiton, contractor, for $17,984.91, and work on the present building was begun on June 21, 1907, and finished in June 1908. The above price does not include the interior furnishings. These cost in the neighborhood of $10,000—including windows, organ and heating. While the church was building, services were held for more than a year in the Greensboro Opera House, which was kindly tendered the congregation free of rent, by the owner, Mr. J. A. Blunt. The following is as complete a list of the presiding elders and preachers in charge who have served this district and station as it was possible to obtain: