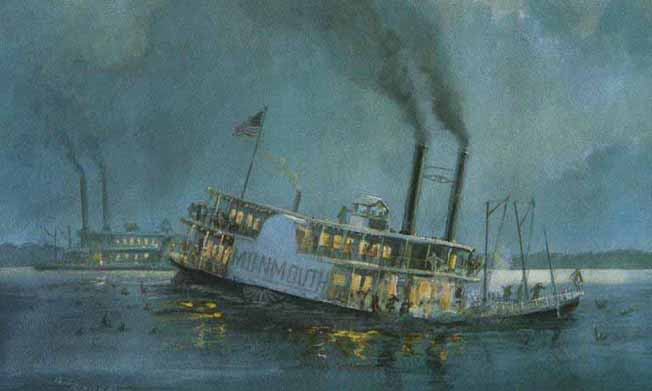 When the Steamboat Monmouth sank in the Mississippi, Creek Indian passengers paid the price.
By Cecil Meares

A man stood on the bridge of the steamboat Monmouth and peered through the misty October [31st] night in 1837. His journey had begun at New Orleans a few hours before, and when he looked back now he could see the lights of Baton Rouge fading in the distance. The heavily loaded boat, filled with 700 Creek Indians, was making its way northward up the lower Mississippi en route to the Red River and beyond.

A cold rain was falling, but the man was well-protected by his thick outer garments and wide-brimmed hat. A shrill sound suddenly pierced the darkness, and he jumped as if a gun had gone off next to his ear. Frantically, he rushed forward toward the wheelhouse to ask why the pilot had rung the bell. “Don’t you see it?” the pilot yelled.

The man scarcely had time to look before another boat struck Monmouth. The violent collision broke the bows of Monmouth, and the waters of the Mississippi poured in. Split in two, Monmouth went down, taking more than 300 Creeks with it the worst pre-Civil War disaster on the Mississippi River.

Word of the collision spread slowly, despite the gruesome losses. The first telegraph line between Washington, D.C., and Baltimore would not be in operation for another seven years. Newspapers, letters and pamphlets had to be carried on horseback, by stagecoach and by steam boat. Newspaper readers in the East might not have had word of the accident for weeks, if they got it at all.

The local newspapers picked up the story from the surviving boat officers and crews, but the disaster stopped being news very quickly, and no fingers seemed to be pointed in the aftermath. Years later, corporate and political pressure to improve and update river navigation practices began to grow It was only then that stories about Monmouth and other costly steam boat accidents were revived to challenge the obsolete rules governing river travel.

Steamboats were new on the Mississippi

The steamboat had been introduced on the Mississippi in 1811, and by 1820 paddle wheelers had become numerous on the big river. Because of the low unit cost of steamboat freight and the sheer numbers of passengers that could be literally packed on the boats, the steamboat became a favorite of shippers and of ticket agents. The development of the huge Mississippi Basin was due in large part to the steamboat.

In the 1830s, some 18,000 Creeks were moved from Georgia and Alabama to new Western lands. A group of 1,600 Creeks marched in the summer of 1837 to Mobile Point, Ala., and later to Pass Christian, Ala. A yellow fever epidemic killed more than 100 of those Indians while they waited at the two posts.

Human cargo packed onto the boat

When the time came in the fall to move the survivors to the territory in the West, the U.S. Army contracted three steamboats: John Newton, Yazoo, and Monmouth. The Creeks were put aboard to start their journey up the Mississippi on the night of October 27,1837 (the exact date in October varies in different accounts).

Monmouth was a small steamer weighing 135 tons. Her human cargo, it was said, was crammed onto the boat without regard to comfort or safety. About 700 Creeks managed to get aboard.

The three boats made fairly good time on a cold, rainy night. They steamed north of present day Baton Rouge, La., without any trouble. The prevailing practice of boats going upriver was to stay in the slack water close to the banks and, at the bends, to cross to the far banks where the water moved slowest. Boats moving downriver were expected to follow the river channel out toward the middle, where the current moved fastest. But whether or not Monmouth was where it should have been or exactly what happened to cause the collision will probably never be known.

It is known that the accident occurred at Prophet Island Bend (today called Profit Island Bend) and that Monmouth was struck by the sailboat Trenton, which was being towed by the steamboat Warren. The violent impact threw hundreds of unsuspecting Creeks into the deep river.

Those Indians not immediately swept away struggled desperately for something solid to grasp. The men aboard Warren tried to help, as did the men of Yazoo, which had circled around and rushed to the rescue. Those two steamers picked up whatever survivors they could reach. The cabin of Monmouth had broken off and floated downstream with the crew and about 200 Indians aboard. Alter floating some distance, the cabin also broke in two parts, spilling them into the river. Some of those men were picked up.

Exactly how many Indians drowned is uncertain. Some reports said 240, others about 360, while yet another report put the drowned at more than 400. The most commonly quoted estimate, 311 Indians drowned, comes from the book Indian Removal, by Grant Foreman. There were also two non-Indians lost the Monmouth barkeeper and a fireman.

The man in the wide-brimmed hat who had been standing on the bridge just before the collision was the owner of Monmouth and the principal eyewitness quoted in the newspaper accounts of the accident. As one might expect, this Mr. Eastman defended his steamboat, saying that it was only 12 months old, was fully manned and was guided by well-trained officers.

In short, he vigorously denied the rumors that Monmouth was old, rotten and unseaworthy and was in a part of the river where she should not have been. Eastman later said that the accident was caused by the darkness and rain combined with the neglect of Warren’s officers, who apparently did not put lights on their tow. The news papers at the time, however, said nothing about whether or not Trenton had lights, and the only mention of Warren was that it was involved in the collision.

Another tragedy for the Indians

No doubt more would have been made about the sinking of Monmouth had it occurred in a less remote area and had more white people been killed. Still, there were some writers who showed their concern for the Creeks who drowned on their way to a new Western home. “What a fate is that of the poor Indians,” the New Orleans True American said. “On all sides they are met with battle, murder and sudden death, and reaping the blessings which civilization had brought to them!”

Feelings of moral indignation inspired the editor of a weekly newspaper, the Niles National Register, to write, “If retributive justice is meted out to nations as to individuals, what a fearful reckoning is in reserve for this nation.” Another writer, recalling a series of atrocities recently inflicted on the Indians, said, “Link upon link is so constantly adding to its length, that the presses of every country ought to have a heading line of ‘awful calamities’ stereotyped for daily use.”

How could it have happened?

But how could such a grisly and unfortunate accident happen? In Steamboats of the Western Rivers, author Louis C. Hunter describes the perils of river navigation. He points out that even considering the wide expanse of water in a river such as the Mississippi, passing steamboats might not be able to avoid each other. Island chutes, sandbars, rapids and low water all could hinder navigation, especially when the boats had flat bottoms and little or no keel to grip the water.

Boats going upriver were to follow different courses than boats coming down, but while trying to find the right course, the boats would weave back and forth, often into each other’s path. Maneuvering steamboats in unpredictable currents at night, with some bad luck thrown in, might have been enough to cause the Monmouth-Trenton collision.

Another consideration is that warning lights on steamboats at that time were not customarily used. Agreed upon regulations for display of lights and bell-and-whistle signals on steamboats were not promulgated until public outcry forced the federal government to take action. In the last quarter of the 19th century, markers, buoys and signal lights finally appeared on the Western rivers. Not until after the Civil War did the powers that be recognize the value of beacon lights as an aid to navigation. Searchlights were not introduced until 1875.

In 1885 the government began setting up a system of forecasting river conditions, instead of having the pilots rely on word of mouth. Also, the U.S. Corps of Engineers began creating long-range plans to generate safer river navigation. The Corps’ river charts and river forecasts are invaluable, according to a present-day Mississippi River tugboat pilot, Raymond Bowers, who said that he does not think the river will ever be totally tamed.

Bowers said that modern soundings made at the Profit Island Bend section of the river, where the accident occurred, show a water depth of more than 200 feet at some points during high water. He marveled at the courage of the pioneer pilots who had to operate without lights, sounding devices, buoys or river charts. “They must’ve been flying by the seat of their pants,” Bowers said.

Overcrowding was to blame for the loss of life

Whatever the reason or reasons for the October 1837 collision, the overcrowding of Monmouth certainly was to blame for the great loss of life when the steamer was struck by Trenton. “Why is such a thing as this permitted?” the New York Observer later asked. “We know not whether there be any legal ratio placed for carrying passengers in steamboats, but this loading is at least treble what would be allowed by law on board a ship.”

In 1856, Lloyd’s of London included commentary on Monmouth in its book Lloyd’s Steamboat Disasters: “It is not without some feeling of indignation, that we mention the circumstance that the drowning of four hundred Indians, the largest number of human beings sacrificed in a steamboat disaster, attracted but little attention in any part of the country.

Accordingly, the best accounts we have of the matter… have scarcely a single expression of rebuke for the heartless villains who want only exposed the lives of so many artless and confiding people to imminent peril, or almost certain destruction.”