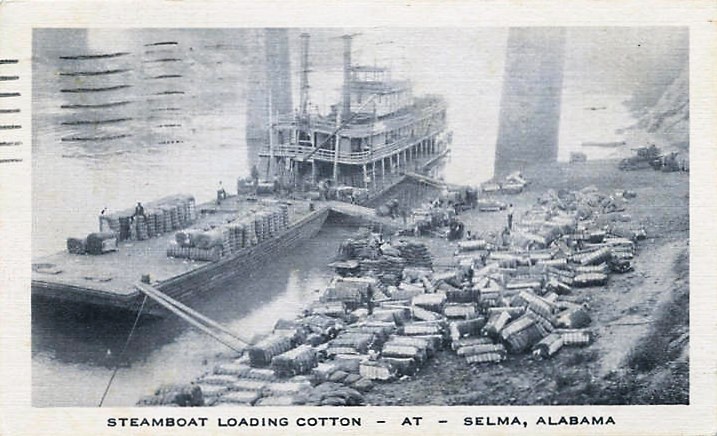 Gambling in the early days was very common and considered quite a respectable occupation, and men of the highest standing, measured by the moral standard of the age, engaged in it and wagered princely fortunes on the turn of a card. To illustrate the reckless daring of those who sat at the gaming table in the days referred to, the following true incident is related:

Returning with a very large sum of money

Sometime in the year 1833, there went aboard one of the magnificent steam-boats on the Alabama at Mobile, a young man, (whom we shall call Brown) on his way home at a point higher up the river. He had spent several days in the city transacting business, and was returning with a very large sum of money to be used in the conduct of his business as a merchant. After selecting his stateroom and looking to the safety of his baggage, he leisurely strolled about and made the acquaintance of his fellow passengers. He was of good address, handsome and well-educated. He found, to his intense disgust, that he was so unfortunate as to have taken passage with quite a large and accomplished set of gamblers. They were going up the river on a “professional tour.” 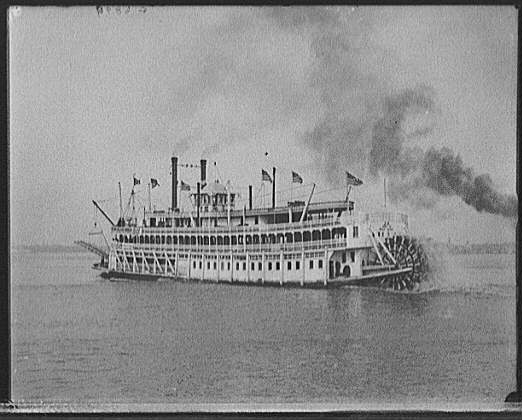 No sooner was the steamer well under way before these gamblers brought forth the implements of their profession. Faro, roulette and various other gambling devices were exhibited to tempt the unwary to risk their money. At first, many of the passengers objected to having the cabin turned into a gambling hell; but the professionals were loud in their claims that they played on the square, and assured those who objected that if one of their number should be caught cheating, the stakes should be forfeited and he put off on the nearest land. After this, no further objection was made, and the numerous games went on without interruption.

By some means the gamblers found out that Brown had a large sum of money with him and they constantly besought him to “try his luck,” but he firmly declined all invitations. But one evening after supper, tiring of their Solicitations he yielded and consented to make one of a party of four who were about to sit down to a game of cards for small stakes.

At first it was tame

For a while, no special interest attached to the game, —it seemed tame and uninteresting, and the parties appeared to be evenly matched in point of skill. But as the game progressed, the professionals discovered that Brown was no novice at the card table, for he was able to hold his hand with the best. Larger sums were staked as the hours passed. Two of the professionals, either unable or unwilling to risk such amounts as were being bet withdrew from the game. Brown and one of the gamblers, however, still retained their seats, and with eager faces and shaking hands continued to play. All the “banks” were deserted, and everyone in the cabin gathered around the table and in breathless silence watched the game. Fortune was favoring Brown, and he won stake after stake, when the professional, with a fierce oath, dashed down the cards and challenged him to give him his revenge with dice, to which proposition Brown assented.

RIBBON OF LOVE: 2nd edition – A Novel of Colonial America Inspired by actual people and historical events! Based on the Cottingham ancestors of Bibb County, Alabama.

The dice and cups were produced, and the now thoroughly excited men again bet their money, but not with the same result. Brown was the loser in every throw. He now seemed wild and beside himself with excitement. He doubled every time until no less than ten thousand dollars lay upon the table to be won or lost on a single throw of the dice. Again the gambler was successful, Brown sprang from his chair, and telling his antagonist to remain where he was, repaired to his state-room and returning in a few minutes, threw upon the table a large roll of bank bills, saying to the gambler: “You have already won from me over fifteen thousand dollars. The money I have just placed upon the table represents double that amount. I dare you to put up a like sum and let the ownership of the whole be decided by a single cast!”

A breathless silence pervaded the room

The gambler, without hesitation, expressed his willingness to do so but declared that he did not have so much money as that. The deficiency, however, was soon made up by his partners, and the two men prepared to resume the game. Lying near Brown was a large carving fork which the waiter had neglected to take from the table when he had cleared it that evening, and as he resumed his seat he carelessly, and apparently accidentally, drew this fork close to his side.

A breathless silence pervaded the entire room. Men stood aghast at the tremendous nerve of the two players. Sixty thousand dollars to be won or lost on a single throw of the dice!

Brown seized the cup and shaking the dice violently for a moment, dashed them before him. Those who were in sympathy with him could hardly suppress a cry of exultation as they saw that he had thrown double fives— within one of the highest numbers it is possible to make.

The professionals cast uneasy glances at each other, but the gambler who was playing with Brown only smiled scornfully, and drew the dice towards him. However, just as he was placing them in the box, they slipped from his fingers and fell upon the floor.

Drove the sharp prongs through his wrist

In an instant, he stooped and recovered them, but as he reached forth his hand to take the cup, Brown, whose eyes had a fixed and determined look, and had never for an instant been off him, suddenly seized the fork, and with a movement as quick as that of a rattlesnake, drove the sharp prongs through the wrist of the gambler, literally pinning it to the table, and at the same time presented a cocked pistol full at his head. There was a fearful yell from the wounded man and a volley of oaths from his companions. Half a dozen weapons were instantly planted at the breast of Brown. He was, however, equal to the occasion. Not a muscle of his face moved, and his voice was as calm and undisturbed as if in ordinary conversation as he said:

“One moment, gentlemen. You yourselves have declared that should one of your number be detected in foul play, that the stakes should be forfeited and he summarily punished. If the dice under the hand I have pinned down on this table are not false, then do with me as you please. If, however, my assertion is correct, I demand the fulfillment of your pledge.”

Gambler rowed to an island

By this time every male passenger on the boat had collected around the table, and the gamblers saw by their looks and drawn pistols that they were not to be trifled with. So they were forced, reluctantly, to admit the truth of Brown’s statement. –

The gambler was held securely in his chair, the fork withdrawn, and the dice examined. They were found to be loaded. The true pair were concealed up his sleeve. His fate was sealed. In spite of desperate resistance, strong arms stripped him of his weapons, forced him into a boat and rowed him to the nearest land—a low sand bank entirely surrounded by the rapidly rising river. Upon this island, deaf to his piteous appeals, they left him, and the steamer resumed her course up the river.

But long after those on board had lost sight of him, there came to their ears through the black darkness of the night, wild cries and fierce denunciations from the doomed gambler who had been left upon the lonely sand bank, which was soon to be swept by the angry waters of the swollen river.

Brown hid his face in his hands and wept like a child. Strong men turned pale as they heard, above the dash of the ponderous wheels of the steamer and the rush of the waters, the despairing wails of the man of whose fate there could be no doubt,—for the strongest swimmer could not for a moment stem that fearful torrent, and to remain upon the bank was but to choose a lingering and more fearful death.

There was no more gambling on board the boat that night; and at the first landing reached next day most of the passengers left her, fleeing as if from some place accursed. Among those who left was Brown.

It would be profitless to follow him further, for the reason that this incident is simply noted in order that the present generation, and that to follow, may have Some idea to what extent men went at the card table in the olden days when gambling was considered a proper and respectable occupation.