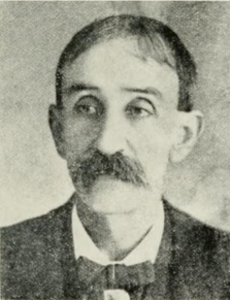 Major Samuel M. Tate was born in Middle Tennessee in 1817. While a child he moved to Fayette County, Tennessee, where he received his education. In about 1840 he became a merchant in Somerville, Tennessee.

When the Memphis and Charleston Railroad was chartered in 1846, he became its secretary-treasurer and was later its president. During the Civil War, Col. Sam Tate was involved with railroad business in Alabama having much correspondence sent to him at Demopolis.

In 1868 his construction company contracted with the South and North Alabama Railroad to build a rail line from Montgomery to Decatur. For $5,014,220, Tate agreed to finish constitution from Calera to Elyton by April 1, 1871, and to Decatur by December of 1871. By November 1870, Tate had the sixty-three miles of road to Calera repaired and completed. This was almost completed in 1871 when the company sold its contract to the Louisville and Nashville Railroad.

On February 25, 1870, he was injured in a terrible train accident near Oxford, Mississippi that resulted in the death of at least seventeen men, women, and children and wounded many more at Buckner’s Trestle. The train was en route to New Orleans and was running behind schedule as it approached Buckner’s Run at a high rate of speed. Colonel Sam Tate, who at the time was president of the Mississippi & Charleston Railroad, was in the back of the train and sent word to the engineer to slow down before taking the curve just north of Buckner’s Trestle. Whether the advice reached the engineer or was ignored is not known. One or more cars jumped the track, but somehow the locomotive managed to make it across the trestle. However, the next two cars slammed into an embankment on the south side of the ravine with such force that “its framework was utterly shattered by the shock, so that the roof fell in upon the mangled passengers and debris.” The next two cars plummeted into the forty-foot ravine. The first passenger’s coach fell headlong into the chasm and was crushed by the next car.

Samuel Tate was seriously injured when he was nearly suffocated before the pile of wounded, confused and stunned passengers that were thrown upon him so he could not move.

Sam Tate was also listed among the early ironmakers of Birmingham being one of the people who organized the Birmingham Coal and Iron Company in 1880. He lived in several places in his later life including Florida and the Little Rock, Arkansas area.

He died in Memphis on July 26, 1892. He was married and had at least two sons, Samuel Tate, Jr., at whose home he died, and Thomas Tate, who served briefly as mayor of Birmingham during 1872.