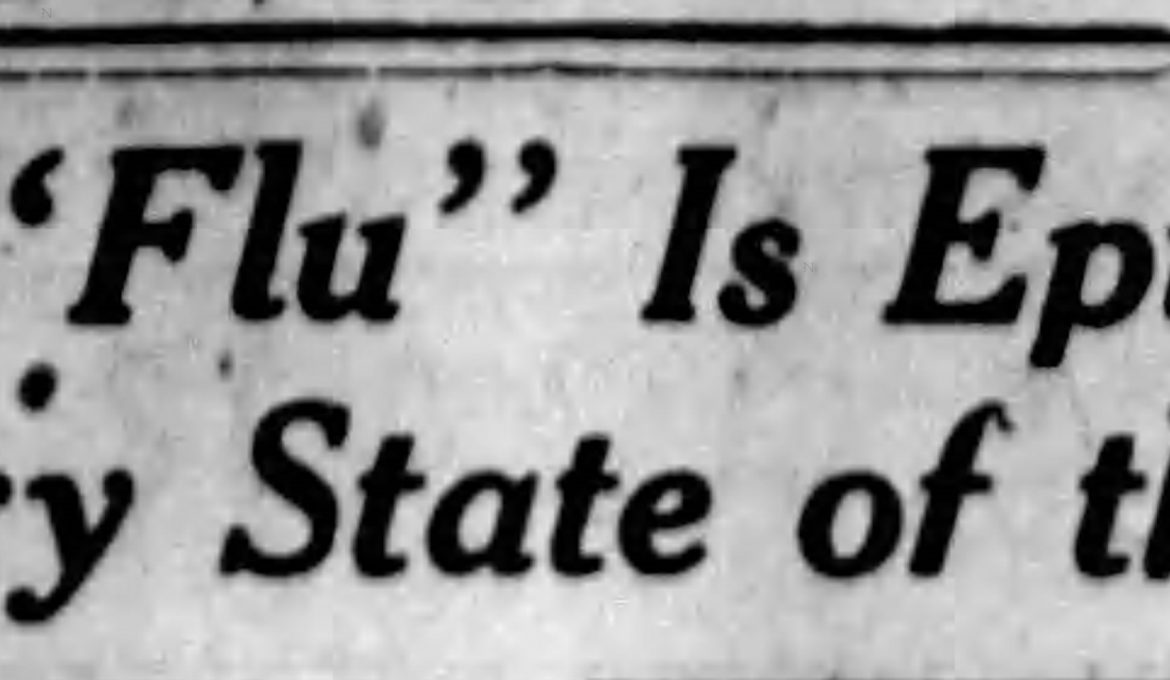 Store closings and social distancing were practiced in October 1918 to help eradicate the Spanish flu which became an epidemic.

“Spanish Flu” is Epidemic in Every State of the Union

WASHINGTON, Oct. 16 – Spanish Influenza now has reached epidemic proportions in practically every state and in only three has it been reported as stationary with some improvement in the situation in Massachusetts. In spite of all efforts by federal, state, and local authorities, the disease has spread rapidly and the death toll has been high in most parts of the nation.

In army camps the epidemic is subsiding, a further decrease in new cases being noted Tuesday at the office of the surgeon general of the army. The total of cases reported was 6,498, a decrease of 773 from Monday. Pneumonia cases were 1,916 against 2,523 the day before but the number of deaths increased, being 889 against 716 yesterday.

Reports made public last night by the public health service show that outside of Massachusetts, the epidemic is severe throughout New England, Not a single state east of the Mississippi is clear of the disease and in most coast states from Maine to Florida conditions are serious.

The number of cases reported also is increasing in California, Oregon and Washington where the malady has appeared in all mountain states and is epidemic in most of them. Minnesota is the only west central state reporting the disease stationary, while influenza is epidemic in Ohio, Michigan, Indiana, Wisconsin and Illinois. It also is epidemic in all the southern states as well as in Oklahoma and Arkansas.

In the war crowded District of Columbia the epidemic continues unabated. As a further precautionary measure, the treasury and interior departments Tuesday issued orders that no new employee of those departments be brought to Washington until further notice. Similar action is expected by other government departments which still are in need of additional help.

Unique in waging a fight against an epidemic is the method adopted in Montgomery of limiting the nmber of persons who may be present in a store at one time. This was made necessary because of the overcrowding of certain down town stores last Saturday night. Numerous complaints concerning these conditions were received during the week. After careful surveys of the various stores and numerous conferences it was decided that the interests of the people would best be conserved by limiting the number of people who might be present in the establishment at one time.

In accordance with the above mentioned plans notices were served upon the managers and proprietors of the principal places while others were notified through the newspapers that only a designated number of persons, other than regular employees, would be permitted to remain in the establishment at one time. It has been exceedingly interesting to note the readiness and ingenuity with which this request was met. In most places reliable employees were stationed at the entrances to count the incoming persons. When the allotted number had entered others were refused admission. The shop keepers of the city deserve unsinted praise for the admirable manner in which the requirements have been observed. It is earnestly to be hoped that the precautions against crowding will bear fruit at an early date and that the city will resume its normal mode of living.

The request of stores to close at 6 o’clock p. m. was met as cheerfully and readily as was the order limiting the number of persons who could enter at one time. The manner is which this was done, without protest or grumble, speaks volumes for the shop keepers of the city. The early closing order is more far-reaching in its effects than appears on the surface. Not only will Saturday night crowds be prevented but tired clerks will be given additional time for rest, recreation and home life. All of these, by increasing the bodily resistance, will put the people in better physical condition to resist possible infection. Then too, it is hoped that the shopping public, by returning home at an earlier period will make room for the office and working forces on the street cars, thereby lessening the congestion on the public utilities.

The success of the limitation and early closing requests appears already to be assured. With this addition; precaution numerous cases of influenza will, undoubtedly be prevented.

(Following excerpt has been transcribed from The Montgomery Advertiser December 7, 1918)

MASS MEETING IS URGED TO DISCUSS THE FLU SITUATION

A referendum probably through a mass meeting to sound public opinion on the question of replacing the Influenza ban in Montgomery was suggested at a called meeting of the county health board last night. Whether or not this plan will be followed or what steps will be taken in the Flu situation will be decided at a meeting of the County Medical Society tonight.

The statement was made that the meeting tonight, as well as all other public meetings of the society are open to the public. Tonight’s meeting will start at 8 o’clock.

Nine doctors and two insurance men expressed the opinion at the meeting last night that the situation in Montgomery has grown alarming and that unless immediate steps are taken to prevent the congregating of people and unless a united fight is made, that a serious epidemic will spread throughout every section of the community. They declared that if the ban is not immediately placed on the city that there will be an astounding number of pneumonia cases and deaths.

Commissioner J. C. Tyson made the suggestion that if conditions are such as the doctors reported, that the proper method to pursue before closing the city would be to isolate the cases of influenza and put on a house to house quarantine. This method was also endorsed by Leopold Strauss, a member of the City Board of Education.

Matt S. Whitfield, another member of the Board of Education, declared his opposition to closing the schools unless a rigid ban was put on other public places. He said that there is no use to allow the 6,500 school children to run at will about the city in crowds and in flu infected places when they are being given every possible protection in the way of ventilation and warmth at the schools. This statement was also endorsed by Mr. Strauss.

The suggestion was made by one physician that a mass meeting of citizens be called to settle the question, members of the City Commission and the Board of Education declaring they are willing to abide by such an action. It was intimated that the gathering of the people for a discussion of the matter would cause a crowd to congregate and it is this that the Board of Health is seeking to prevent. On the other hand, it was declared, that since, according to the physicians, there are already a number of cases, one meeting to finally settle the matter could not do any harm.

Vinegar of the Four Thieves: Recipes & Curious Tips from the Past is now in paperback