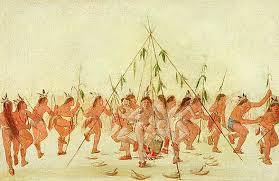 Excerpts from the History of Coosa County, Alabama

Mr. William Spigener of Wetumpka (Note by D. Causey – Wetumpka is now in Elmore County, Alabama) has a fragment of what was once a valuable diary of Joel Spigener, one of the pioneer settlers of Coosa. From this diary there follows a short extract which properly stands related to this chapter, though it is not a quotation, but compilation. Spigner tells of an Indian ball play he attended in company with Charles Bulger, in July 1833.

This play was about two miles above Hatchesofka Creek, on the Jackson Trace road as afterwards established. These two were the only whites present. There were more than four hundred Indians He says he never saw anything to equal the expertness with which they played. The balls would fly higher than the tallest pines. The play lasted about six hours. He and Bulger bet fifty cents on one party, but did not know they had won until the stake holder handed them the money.

Joel Speigener and his family attended

He attended the green-corn dance at Jabouver Town House five miles above Wetumpka, in 1834. The name of the presiding chief was Magilberree. At this dance a young man named Brown, was killed by another young man named Houghton. Brown’s parents lived in Georgia, and Houghton’s in Wetumpka.

At the green-corn dance of July, 1835, at Alabama Town, Joel Spigener and his whole family attended. He says it was a very solemn religious rite. The Indians insisted on his daughter Eliza and Miss Caroline Paulden, a niece, to participate in the dance. They accepted, and went through the dance just like the Indian squaws. The chief of Alabama Town at the time of this dance was Sukabitchee, or Broadback.

“The Indians hold what we call a Green Corn Dance, once each year, about the time corn gets into the roasting-ear stage. It lasts about three days and nights, and they fast all that time.

They take the black drink the last day

The chief sits on a raised embankment, with a drum, often made of an earthen pot covered with a raw-hide head, and one stick with which he taps on the drum, while the warriors, some hundreds in number, in single or double file move around him, dancing and keeping time to his drum. This is an act of religious worship to the Great Spirit, and a degree of profound solemnity is observed through all of it.

The last day they take the “black drink,” which is a dark tea made from some herb, which is very bitter, and bring on nausea, producing violent vomiting. They claim this purges from the sins of the past year, and prepares them to enter the new year clean. This is followed by a feast.

The women come from all directions with baskets loaded with corn, boiled m the shuck, with pumpkins unpeeled, boiled whole other vegetables with meats, all without salt or other seasoning. All participate in the feast, and thus ends their most solemn religious season.”

This story and more can be found in ALABAMA FOOTPRINTS Pioneers: Lost & Forgotten Stories (Volume 3)

They felt the lure of the frontier and struck out for unknown territory that would become Alabama, bringing with them only very few implements to survive. From Tennessee, North Carolina, South Carolina, Georgia and many other states they came to settle in the newly opened Mississippi Territory. Alabama Footprints Pioneers continues the series with lost and forgotten stories of the earliest Alabama pioneers.