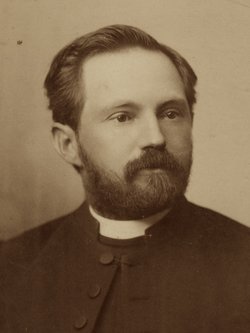 William Temple Allan was an Episcopal clergyman, for a number of years a resident of Alabama. He was born December 15, 1855, at “Balclutha,” the colonial home of his father in Clarke County, Virginia, the son of William Temple (1817-1903) and Mary Elizabeth (Bailey) Allan, (1827-1921), the former a native of Virginia, B. A. graduate of Princeton University later taking a post graduate course in topographical engineering, served as private secretary to Commodore Jones on the flagship Constitution, ornithologist, and botanist.

He was the grandson of David Hume and Sarah G. Griffin (Taylor) Allan, the former a graduate of Princeton University, later graduating in law, who retired in order to manage his estates in Virginia, Kentucky, and other states, and of Samuel P. Bailey, of Faquier County, Va.; great-grandson of Col. Griffin and Mary (Kennon) Taylor, the former an officer in the Revolution; great-great-grandson of Lady Ann Maitland, of Lauderdale, Scotland.

Dr. Allan descended on his maternal side from Robert Green, of Culpeper County, Va., an immigrant from England in 1719, and on his paternal side from Robert Allan, who emigrated from County Armagh, Ireland, to Virginia, in 1736. He was educated in the country schools of Virginia; taught in West Virginia for one year; was a student at the Theological seminary of Virginia, 1876; removed to Texas where he taught, meanwhile pursuing the study of theology; ordained deacon, 1879; student at the University of the South, Sewanee, Tenn., 1880-82; ordained to the priesthood by Bishop Elliott, of Texas, 1883; served at Talladega, Jacksonville, Livingston, Boligee, Gainesville, Gadsden, and again at Jacksonville, 1906-15.

He removed to Missouri and later to Texas. He has taken much interest in the work of the United Sons of Confederate Veterans and was chaplain general, 1912. He was an Episcopalian; Odd Fellow; and a Rev. William Temple Allan was the author of “Episcopal church in politics and religion” and “Basic principles of the Episcopal church”

He married on December 2, 1885, to Mrs. Adriana (Weissinger) Petty (Nov. 6, 1845- Apr. 28, 1926), daughter of Jesse Weissinger, and Susannah (Bell) Weisinger of Dallas County., Alabama . They later resided in Guthrie, Oklahoma. They had one child who died in infancy. Rev. Allan passed away on May 21, 1922, in Harrison, Boone County, Arkansas and is buried in Summit View Cemetery, Guthrie, Logan County, OK. His wife is buried beside him in the same cemetery.

Where Do I Start?: HINTS and TIPS for BEGINNING GENEALOGISTS with ONLINE RESOURCES  is filled with Hints and Tips to begin your family genealogy research and acquire Genealogy information. In this book, you will find, many on-line resources, how to do court house research, where to find birth, death, social security records free on-line, and 81 questions to ask when interviewing elderly relatives. The Tips on How to break down the proverbial ‘Brick Wall’ and Free ON-LINE resources will help even the experienced genealogists