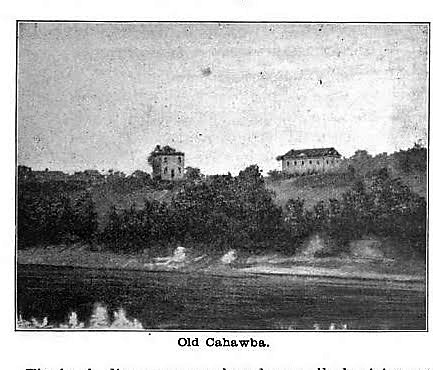 A tragedy occurred in Cahawba, Alabama on October 7, 1820, that was reported in New York

(This story has been transcribed from The Evening Post (New York, New York) November 2, 1820)

Melancholy – An unfortunate occurrence took place in the county of Dallas on Saturday the 30th ult. The circumstances attending the transaction are these.– A man by the name of George Grover who had come into the neighborhood in the character of a well-digger, and was then engaged in digging a well for Jacob Jackson, Esq., of this county, became intoxicated, took a bottle of whiskey, went to the house of Charles Carroll, an elderly man of about seventy five years of age, whose good fortune had procured him a young wife.

When Grover arrived, he found Carroll, his wife, and two young ladies, who lived in the neighborhood, spending their time very agreeably. He soon proposed a “dram” from his bottle and began to use very indecent language to the ladies, and especially Mrs. Carroll. The old gentleman, Mr. Carroll, told Grover his conduct was imprudent, that he was imposing on his house and family, that he was an old man, very frail, and not able to resist strength, but that he could not suffer his family abused.

Grover hearing this, instantly cursed Carroll and his wife both, calling her by every epithet of abuse his imagination could invent; and drew up first an axe and then a chisel to strike Carroll.

Carroll had a gun

At length he was prevaded (sic) on to leave the house for a few minutes but again returned with his bottle raised in his hand, swearing he would take Carroll’s life. Carroll had a gun in his hand which he had loaded for the purpose of killing a beef and was out side of his yard fence. He precipitately crossed the fence and stood in the door of his house; Grover crossed after him;, Carroll had his gun presented towards him, telling him not to approach – Grover at this instant conceiving himself in danger attempted to get a chair which sat in the yard & in the act of setting it down, Carroll’s gun went off and lodged the contents in the middle of Grover’s breast who instantly expired.

A jury of inquisition was held over Grover and the proper steps in such cases taken – Carroll gave himself up to the nearest justice of the peace, and Judge Safford has granted a special court for his trial to be held at Cahawba on Monday, the 30th instant.