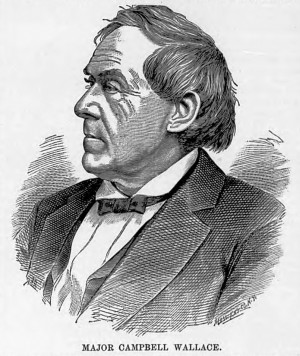 Major Campbell Wallace was born in Sevier County, Tennessee, on December 7, 1806 to Jesse and Martha (George) Wallace. “He grew up in Maryville, Tennessee where he attended Anderson Seminary. He moved from Blount County to Knoxville at the age of fourteen, where he was employed by a prominent merchant, Charles McClung. In 1837 Wallace entered a partnership with Matthew and Hugh L. McClung, forming Knoxville’s first wholesale business, McClung, Wallace, and Company.” Around 1842, he bought out the brothers and founded his own wholesale business. He accepted a position on the East Tennessee College Board of Trustees in 1842.

In 1853, he was president of the East Tennessee and Georgia Railroad and supervised the construction of the line to Bristol which finalized the railway from Atlanta to Washington DC.

Major Wallace married Susan Elizabeth Lyon and they had the following known children:

During the Civil War, he had to resign as president of the RR and flee to Atlanta to avoid capture by the Union Army. After the war, he intended to become a farmer but was appointed by Georgia Governor Charles J. Jenkins as superintendent of the Western and Alabama Railroad which post he held from 1866 to 1868. The next year he contracted with Col. Sam Tate to build the South and North Alabama Railroad from Montgomery to Decatur. He was president of the Atlanta State National Bank (later the Merchants’ Bank). He was one of the founders of Birmingham, Alabama.

In 1879 he was appointed to the Georgia Railroad Commission and was made chairman in 1883. He was an elder in the Presbyterian church for many years. He was married in 1831 to Susan E. Lyon. He died on May 3, 1895, in Atlanta, Georgia and is buried in Oakland Cemetery in Atlanta.

is filled with Hints and Tips to begin your family genealogy research and acquire Genealogy information. In this book, you will find, many on-line resources, how to do court house research, where to find birth, death, social security records free on-line, and 81 questions to ask when interviewing elderly relatives. The Tips on How to break down the proverbial ‘Brick Wall’ and Free ON-LINE resources will help even the experienced genealogists.