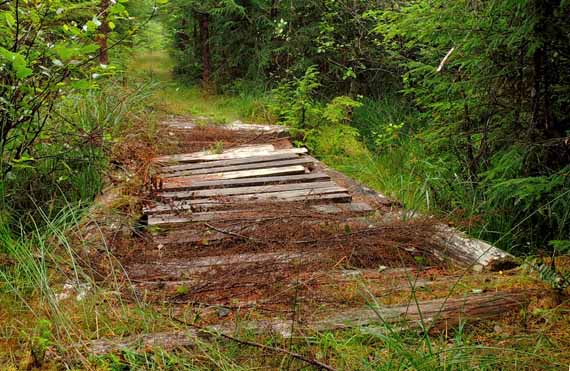 ALONG THE CORDUROY ROAD

The old home place stood among large oak trees at the top of a hill, more of a rise actually, in the black belt just east of Camp Creek. It was a good place for a ten-year-old boy to live.

It had a good well of water, and the old corduroy road upon which U. S. General James H. Wilson and his raiders marched east toward Montgomery after leaving Selma in flames in the spring of 1865 cut through the front yard. 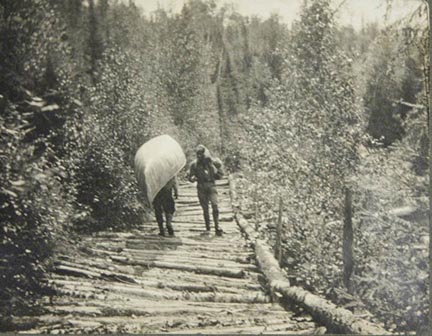 The Yankee army tore down the church at the site of the old home place and built a bridge over Camp Creek so that the wagons and cannon could more easily pass.

The story was that Wilson’s boys in blue were attacked by Confederate Home Guards near the hill, and two Yankees were left in shallow graves along the roadside. Whenever things were boring, a young fellow could always look for the Yankee graves. Once a hired man plowed up a rusty sword, and this was an inspiration to look harder.

The plantation bell at Uncle Bowie’s farm calling the workers from the fields could be easily heard from the old home place, and it never rang longer or louder than the day he died. The little Baptist Church where several generations of neighbors and relatives were buried was near Uncle Bowie’s. The baptizing was done several miles away at Soapstone Creek where the water flowed over a short paved concrete area at the creek. 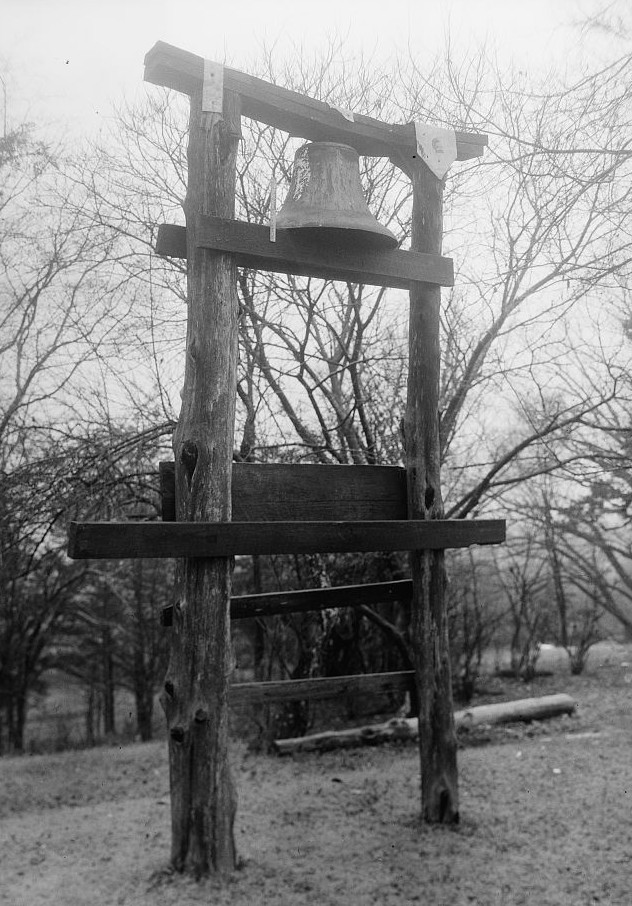 Just upstream, a scoured out deep hole made a perfect baptismal pool for the new members dressed all in white to be immersed. Sometimes it was in question whether the baptizing “took,” but we must leave that to a higher power for final determination.

At the church, there were summer revivals with night services by the light of big brass kerosene chandeliers and daytime cemetery cleanings with dinner on the grounds. Brother Warren, the pastor served a field of four churches, so preaching was on every fourth Sunday. A member always had pastor Warren for lunch on preaching Sunday which was a special treat at our house with fried chicken plus dessert.

To the west about a mile lay the cross-roads and Crum Hawkins Store. He and Ulma had a son about my age, and in the summer if we were really good, Ulma would load up a group of us to go swimming at the baptizing hole at Soapstone Creek. The cross-roads was on the new paved road about a quarter mile from the old corduroy road. It was still possible to travel the old road but only by foot as the bridge had been destroyed and vehicles could not ford Camp Creek. 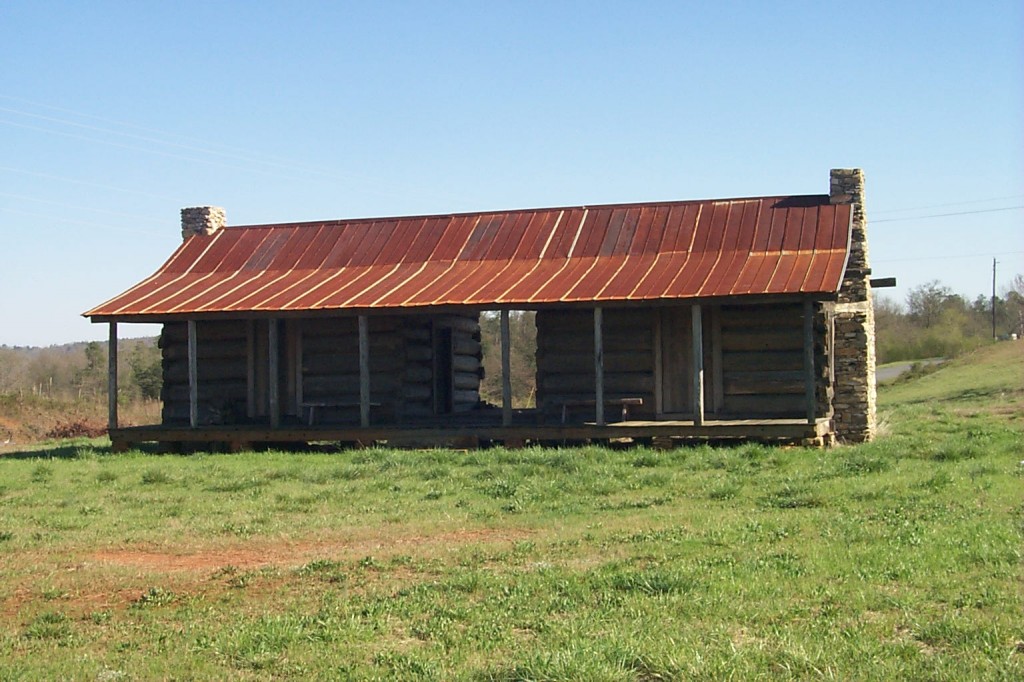 Between the old home place and Crum Hawkins’ Store along the old road lay the Hooper’s house. It was an old log dog-trot house which faced the wrong way as it was built when the old road was in use, and now the new road ran behind the house. Mr. Hooper seemed ancient and was confined to a wheelchair due to rheumatism. It was terribly frightening for a small boy such as myself to visit as Mr. Hooper was lonely for company and always wanted you to come near so he could see you, talk to you and pat your arm. It must have been his advanced age and his disfigured hands that seemed so frightening.

My first experience with air conditioning was at the Hooper’s spring house. It was small and old, made with rough sawn boards and battens with a wood shingle roof. The grey weathered boards were covered with green moss. Inside was a bubbling spring which drained off to the outside and eventually ran to Camp Creek. 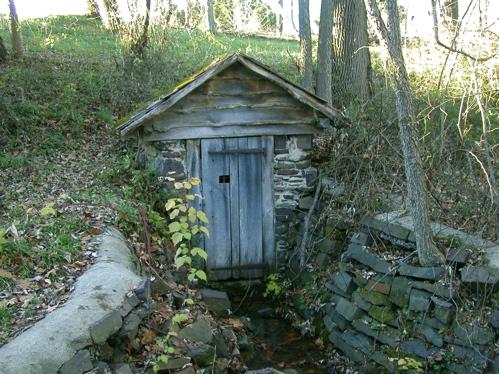 There was just room to stand and to store things on rough shelves with smoke-cured ham and bacon hanging from the rafters and the smoked meat smells were mouth watering. Mrs. Hooper, Miss. Minnie as she was called, also kept eggs, milk, butter and buttermilk in her spring house.

I was sometimes sent on an errand by my mother to buy or barter for butter or milk from Miss. Minnie. I would cut through the woods along the old corduroy road with my little dog, Pete, and jump Camp Creek with its polliwogs and minnows, the polliwogs and minnows sometimes occupied a considerable part of the trip to the Hooper’s; also I remember a few rabbit chases slowing the trip down.

Once I had finally arrived and cleared the hurdle of Mr. Hooper with his trembling voice and seemingly clutching hands, it was out to the cool of the spring house. What a delight in August with temperatures in the upper 90’s and humidity the same.

The spring house maintained a nearly constant temperature, somewhat like a cave, so it was cool in summer and wonderfully warm in the winter. Extreme luck sometimes occurred when Miss. Minnie was churning and allowed her young visitor to run his finger beside the dasher and get a taste of the fine fresh butter.

It’s almost all gone now except the cross-roads, and the new road is now a busy coast to coast four-lane. The oak trees still stand at the old home place – they are much bigger now, and if you look hard, you can find the good well of water.

The old corduroy road still runs quietly through the woods but would not be recognized for what it is. There are still polliwogs and minnows in Camp Creek, and the Yankees still sleep undisturbed in their shallow graves beside the corduroy road. The spring house is long gone except in memory.