Recently, I was scheduled to have some minor surgery and the nurse called me on the phone to obtain some medical history.  Questions, like “Do you smoke? Have you ever had a stroke? Etc?” The last question caught my attention.  She asked, “Did you ever drink well water?”  Startled, I said, “Yes, but, I have never been asked that question before, what kind of question is that?”  The nurse laughed and responded, “It is a research question.”

This caused me to think, “What kind of research can you do on people who drank well water 50-60 years ago?” Later, I learned that the research involved looking at the history of drinking well water, which might contain arsenic and the potential for developing skin cancers.

Well water – where did it come from?

So the question……did you ever wonder about how well water was obtained?  How the place was selected to dig a well out in the country?

In 1947 my dad bought 12 acres of land in Tuscaloosa County to build a house for the family shortly after WW II. Since there was no water system in the area it became apparent that a well needed to be dug near our house.

A local man called a “dowser,” who was known for his witchery in locating water was called to come and use his skills to find the water source under the ground on our property. 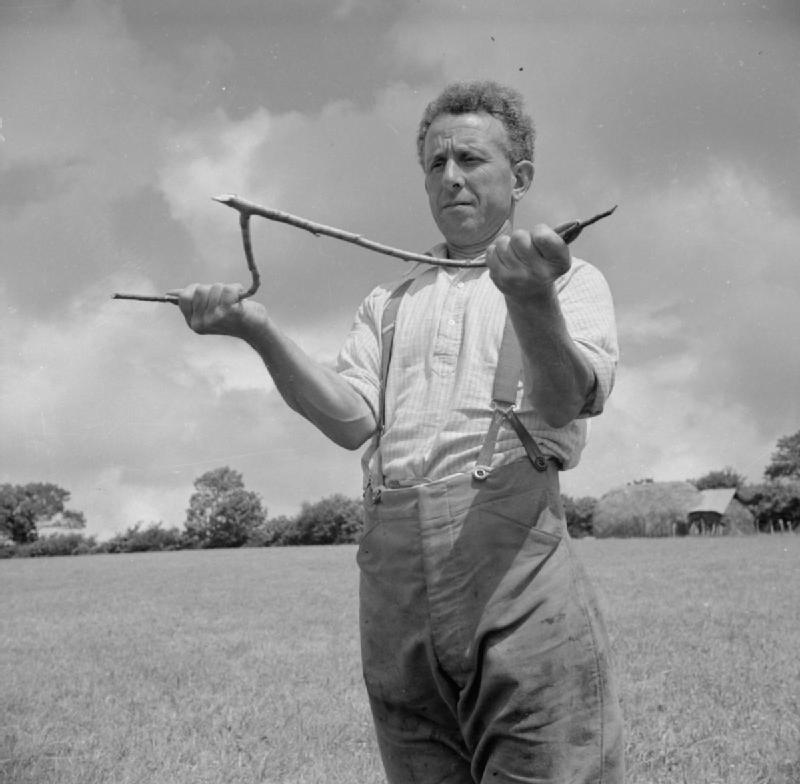 Dowsers knew where to find water

He appeared at the house with his only tool…. a forked stick called a divining rod. I was not present at the time, but dad assured me that this man knew his stuff! The man walked around with his forked stick and he said it turned a certain way when the water under ground was detected.

He pointed out the location to my dad and said, “This is the place.” Dad marked the place with a board and paid the man for finding the water source. My brother who was skeptical about this procedure commented that some “dowsers” were know to have had such a strong pull on the forked stick when water was located that is would blow the bark off the stick!

A local well digger, named Tom Minor was employed to dig the well. He was known in the community to dig square wells. As it turned out the well was dug to approximately 35 to 40 feet down and about three to four feet across. Later after the well was dug it seemed to slant to the left rather than at a perpendicular descent. I watched the process as the buckets of dirt arrived at the top of the well for his helper to discard.

After the well was dug, a wooden cribbing was placed in the bottom of the well to keep the dirt from falling into the water. 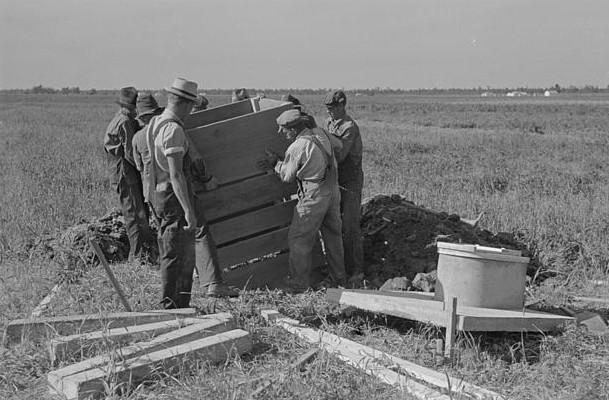 The cribbing rotted away

The last stage was building a well cover out of boards and adding a pulley, rope and water bucket.  Dad let me practice lowering the bucket in to the well and then pulling up the bucket of water with the aid of the pulley and rope. The rope would fall on the ground as I pulled the rope hand over hand to bring water filled bucket up out of the well. That was fun the first time, but afterwards it became a chore!

After several years, the cribbing at the bottom of the well rotten out and my dad bought four large concrete tiles to place in the well to keep the dirt out.

My brother recalls the incident when the man hired to put in the concrete tiles was slightly injured. The man rigged up a large windlass to lower the tiles in to the well.

When the fourth tile was being placed the man looked down to see if the tile was in the proper place and then all of a sudden the tile shifted, the windlass flew out of the man’s hand and he was knocked to the ground.  He was stunned but was OK.

Water had to be drawn from the well for baths, kitchen use, washing clothes and to water the livestock.  I can’t remember how many bucket of water we had to draw and then heat to pour into the ringer washing machine and rinse tubs on the back porch on wash day. That was a lot of water!

Late, people in the community tried deep drilling for water.  This was expensive and the water was undrinkable due to the iron content. Clothes washed in this water turned rusty colored.

It was years before a water system was available in the community.  How I appreciated that water coming out of my tap!