I know something about mules, wagons, cotton and cotton houses, corn cribs, toilets/outhouses, plantin’, Picking off ‘tater bugs’, and digging Irish potatoes. I grew up in the country living in a log house built by my great great grandfather. Nobody told me that .. I just heard it sometime during my lifetime…probably after I grew up my brother or sister told me. (Story continued below) 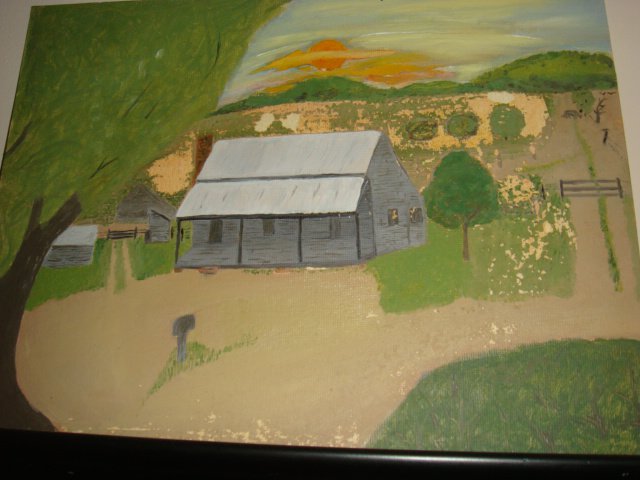 Did not talk about the past

My Daddy seemed to not want to talk about things like that. Somehow he seemed to think it came down to braggin’ when a person talked about his forebears. That’s the way I have come to think about it. I didn’t know until I was grown, half the names in my background.

Found out that log house once had a dirt floor and what we used as a chicken house had once been the detached kitchen…gggrandfather had built that house around the time of the War Between the States/Civil War/War of Northern Aggression.

Greatgrandfather lived there. Then ggrandfather lived there. Then we lived there. Others may have too..that’s just what I know. The house had a front porch the length of the entire front with 4 square posts holding up the porch. The back was the same way. Going through the middle of the house had been what was called a ‘dog trot’. By the time we lived there the dog trot had been closed in. We called that area the hall. My bed was at the front hall, where a window had been placed. The old farm table and old buffet were in the middle of the hall.

On either side of that area was located a large room. In the room to the left was a stone fireplace with a mantle over it, a huge wooden wardrobe, a dresser, and two full-size iron bedsteds with feather mattresses. On the back porch the logs were exposed, not covered with weatherboard like the rest of the house. A favorite storage place was ‘between the logs’. Such things as small tools, soap for bathing after dark in a #2 washtub on Saturdays, and other stuff fit well between the logs. Daddy once found a little secret place there where his grandfather used to place things for safe keeping. 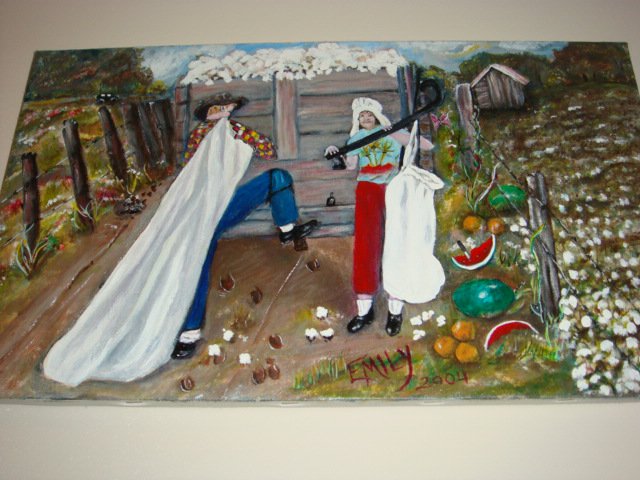 Sometime around the early 1950’s my sister had a home economics project….to redecorate a room to be used as a parlor. Mother and Daddy moved a coal burning heater into that room, giving us another heated area. She, Mother and Daddy papered the walls with rose covered wall paper…the kind that tears easily and in which the tacks to hold it to the wall are clearly visible. A new red couch that made into a bed (covered in some kind of nappy nylon material), a matching chair, a full metal bedsted, a mahogany bookcase with glass door (I loved that bookcase), a cedar chest, and our first portable black and white television were placed in that room. I could watch the Circle 6 Ranch, The Cisco Kid, The Ed Sullivan Show, The Arthur Godfrey Show at home rather than always going to Marie’s house to watch. I remember watchin my first political convention on that old television.

That television clued me into the fact that the world might stretch beyond Wood’s Creek Community.

Off the back porch one was lead down a step made of a large rock probably found down at the river, Military Ford…as it was called since Andrew Jackson’s soldiers forded that Buttahatchee River on the return trip from New Orleans…. way down behind our house. There was a line of what we called hedges/hedge bushes, 4 or 5, spanning the length of the back porch. They had been allowed to grow over 10-12 feet tall when I was a child.

I can imagine they might have been kept trimmed back in my gggrandfather’s day. Long since left to grow, they provided shade from the setting sun for us as the house faced the rising sun and the back porch faced west.

Mules: I remember Belle and Fred

Mules: I remember Belle and Fred. I observed they were calm and minded Daddy when he gave directions…’Gee’ meant to go/turn to the right; ‘Haw’…go/turn left; ‘Whoa’/’Whup’/’Hoa’…stop; ‘Backup’…reverse/go backward; ‘Git up’/’Git up here’, ‘Pull up’…go forward. Belle and Fred never balked but went about any work Daddy had for them. Daddy believed in treating animals compassionately. I heard him say on more than one occasion one should never ‘run’ a mule. I heard him say…’He ought to be whipped for doing that.’ after hearing that someone had mistreated mules. Belle and Fred were not pretty to me but as mules they were a fine pair. They pulled the old wagon when empty, full of cotton or corn, and in the cornfield as corn was thrown into the wagon bed. They wore blinders so the ears of corn didn’t tempt them.

They patiently pulled up a few feet at each of Daddy’s commands even when no one was holding the reins. Belle and Fred were brown handsome mules. Though their names might make one think they were female and male, mules are neither…especially bred that way for a life of service to mankind. They were obedient.

Cows were milked every evening

Cows: I remember Mother milking the cow every evening around sundown. She’d scald the old aluminum bucket and carry a clean wet cloth with her to the cow stall. She’d call…’Sook Heifer, Sooooook, Sooooook’ with a ‘long-distance…way down to the bottom/far-end of the pasture’ volume that would almost sound like an opera singer’s voice. Not long after the soulful calling the cow would come ambling into the barnyard from the lane that led to the pasture near the river. I don’t remember our cow having a name…maybe ‘Heifer’ was it.

Anyway, the cow would walk right into the cow stall and stand at the trough which would have corn or some feed there to keep her busy while Mother milked. Mother would take her milking stool from the nail/hook on the wall, sit down beside the rear of the cow, ever mindful of the propensity of a cow to kick the milker with her hind leg/hoof. She’d secure the cow’s tail in her left hand, position the bucket between her legs, cradling it in her ‘dress-tail’, gently swab the four teats with the clean warm and wet dish towel (made from a flour sack long since emptied), and commence milking by gently but firmly ‘grabbing’ the top of a teat between the thumb and forefinger of her right hand and slowly drawing down to the end of the teat. The milk would ‘squirt’ into the bucket with a sound not unlike water being squirted into a metal container from a squirt gun. She’d continue until all four teats gave no more wonderfully creamy issue. If the cow started moving or jerking its tail away and ‘slapping’ its tail in Mother’s face, she say, “SAW” in a commanding voice and the cow would settle down.

Occasionally our cat would glide into the cow shed and Mother, to my and the cat’s delight, would angle a teat toward the cat and he’d get a delicious mouthful of milk for his supper. I always wanted to learn to milk. Mother allowed me to try numerous times. I never mastered the art and I regret that. This ritual is rarely if ever practiced in our country today.

Mules and wagon much like the ones I recall Emily Clark Ritchie, my sister, painted this (picture above) in the early 1960’s Mixed media. This is the log/weatherboard covered house with clean-swept (with a brush broom Mother made)yard.  That’s a huge oak tree on the left.  That was cut when a new road came through to replace the gravel road.  To the left of the tree was a branch/creek that flowed through our barnyard supplying water to the mules and cow…then on to the Buttahatchie River in the background.  Little did Emily know she’d live on the top of that hill in the background when she grew up.  There she lives today.  The log house is gone.  It was built by GGGrandfather John Bibb Wood of heart pine logs…Wish I had been able to salvage those logs.