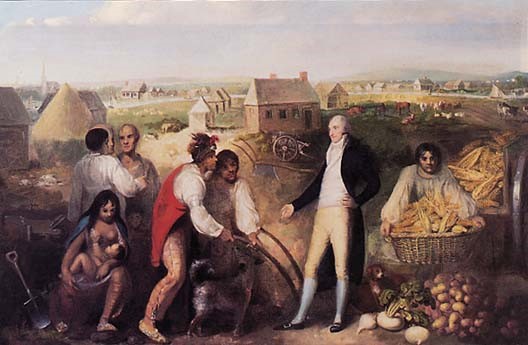 WARNING: Some of the words in this article may be offensive to readers. Please consider the time in which it was written.

The United States Relationship With The Native-Americans In 1830s

The American Annual Register for the Years 1827-8-9, edited by Joseph Blunt, Published by E. & G. W. Blunt 1830, the United States stated the following view of the relationship with the Native Americas in the country.

“By the common consent of civilized nations, the aboriginal inhabitants of this continent were at an early period assumed to be dependent upon the sovereign who occupied it by the right of discovery. All interference with them by any other civilized power was thus excluded; and the government, by virtue of its sovereign authority, prohibited or regulated all intercourse between them and its own citizens. . . . They were thus reduced to a state of dependency.”

As the white population increased, problems developed in the relationship between Native-Americans and the white population. After the Revolutionary War, the United States finally claimed sovereignty over the whole territory of the United States to the exclusion of all civilized powers. But the United States did not assume to exercise “any of its civilized rights over the Indian tribes, which existed as distinct communities.”1 Some of the tribes, had at the time diminished in such a number as to cease to be considered. Treaties marked the boundaries between Native-American land and the American citizens.

“By these treaties, the Indians stipulated, to enter into no-compact with any other power; and that the United States should have the exclusive right of regulating their trade; and the law regulating the intercourse with the Indians operating upon our own citizens, in effect, placed them in a state of dependence upon the federal government, except in their domestic concerns and internal regulations. On the other hand, the United States solemnly guaranteed to them their lands not ceded, and expressly put all American citizens settling thereon out of their protection, and subjected them to the jurisdiction and laws of the Indians. Provisions were also made for the surrender of criminals, and for the punishment of crimes committed by citizens, within the Indian territory.”2

Such were the relations between the federal government and the Indian tribes when a controversy between Georgia and the rest of the United States developed over the western boundary of the state. With the view of settling the controversy, an agreement was made in 1802 which included terms that the United States would remove all the Native-Americans from the State of Georgia.