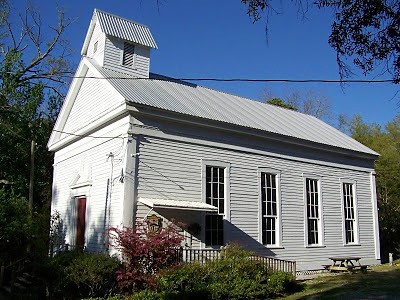 Attending a small Baptist church in the country when I was young was a very different experience than attending church today. My church barely had 100 in attendance on a Sunday morning.  Preaching was held once a month on the first Sunday of the month. The preacher had other churches he preached at during the other Sundays.

I remember as a child thinking, “I wonder if this is the “Preacher’s Sunday?”  If it wasn’t, I had a longer Sunday afternoon to play.

In the winter a pot-bellied stove heated the church.  Only those huddled around the stove kept one side of themselves warm.  We dressed warmly in those days in church during the winter.

In the summer the windows and shutters were opened. Of course, it was always hot in July during the week of revival so we used funeral parlor fans. The reason these hand held cardboard fans were called funeral parlor fans was because they contained funeral home advertisements on the fans and they were free.

The church had no Sunday School rooms but we did have Sunday school for different ages.  The church was divided by a long wire stretched wide and long ways.  A curtain was then attached to the wire and thus made four Sunday school rooms.  It was noisy, but we got use to it.

With no nursery, the attendance at church included all ages, included babies.  Noisy babies were carried out of the church when they began to cry.  Sometimes, a mother would breast feed her baby during a long church service.

There was no baptistery in my church that was founded in 1828. The baptismal service was taken to a near by creek.  The preacher and the candidates would wade out into the creek dressed in white clothes and one by one and the preacher would baptize them.  The crowd would stand in silence as he continued and then the service would end in a prayer.

This was a very impressive service to me

In some churches there was the annual, “Grave Yard Cleaning Day”, always held on a Saturday in May at the church. The men brought tools to cut grass and rake the graves.  The ladies would put fresh flowers on the graves.

The next day on Sunday, the church would have “dinner on the ground”. The members would bring lots of good food to this event.  This was really a gathering where folks got together that had not seen each other since last year or longer. The children would frolic around on the church grounds playing various games.  It was a celebration of renewed friendships of friends and relatives!

Many small churches have since been abandoned or torn down, but their cemeteries remain and the “Grave Yard Cleaning” continues.  One such former church, “Shake Rag” in Tuscaloosa County, still holds on to this tradition.

During the ‘40’s and ‘50 ‘s almost all Southern Baptist Churches had Sunday night services.  Prior to each service there was a study session for each age group called, “Training Union”. Along with that we would have “socials” about every quarter. One of the most enjoyable social outings to me as a preteen girl was to have a night out with our group and adult leaders to go “Possum hunting”.  We would wrap up good in warm clothes and armed with flashlights we would head for the woods with some borrowed local “coon dogs”. It was fun walking in the dark, cold woods with our flashlights as we would imagine ghosts hiding behind the trees and goblins lurking in the bushes.

There was only one time that I remember that the dogs actually chased a possum up a tree.  There the possum was high up in the tree. We would shine our flashlights into his face and see his eyes sparkle and his sharp teeth grinning at us.  The bigger boys would shake him out of the tree and put him in a burlap sack.

After the “Possum hunt” we would gather around a bonfire and roast marshmallows and end up the evening singing songs like, “Home, Home on the Range” and “You Are My Sunshine”.  This was a fun time on a crisp cold night for our group.

The other event we liked was having a hayride. The hayride would be scheduled on a cold clear night.  The youth of the church would gather at the church. After the usual greetings we would hook up with our best friend or boyfriend and climb on the wagon filled with hay bales.  The wagon was usually attached to a farming tractor. Sometimes, hayrides would be in the back of pick up trucks.

The tractor would slowly drive down the farm to market road. We kids would talk, sing and just had a good old time just being together.  The ride would end at a designated spot where a bonfire was set up for a wiener roast.  The wieners were placed on forked sticks for roasting. The adults would bring the extra food to complement the wiener roast.  I shiver to think now how dangerous these hayrides would be if held now.

Vacation Bible school was always held after the ending of school.  The children would march into the church in two lines.  One line would have the first child holding the American flag and the other line would march in holding the Christian flag. Some of the best parts were the arts and crafts that we made and the grape Kool- aide served to the children after a game of kick ball.

The piano was the only musical instrument in the church and sometimes I played the piano for the church service on Wednesday night for prayer meeting.  I was even privileged to participate in several Fa-So-La singing school led by a church member.  I don’t remember much about it now, but I do remember learning to read and sing the shaped notes with no accompaniment.

The Lord’s Supper (communion) was observed every quarter and our church had a silver service to use for the traditional observance of the Lord’s Supper. The grape juice was served from one silver goblet.

I don’t remember if the preacher wiped off the lip of the goblet after each participant or not. Now, of course our Baptist churches use individual glass containers for the grape juice.

Memories of small churches are only bygone memories now.